The ambitious, bold and hungry start their week with The Business of Business!
Markets
10.10.18   8:00 PM Markets

As Sears looks to be going bankrupt, we take another look at its retail footprint that it may need to shrink further to pay off debt holders, as well as where it has already closed up shop.

After several rounds of store closures, it seems as if bankruptcy for Sears ($SHLD) was the next logical chapter in its downward spiral.

Today, reports of Sears contacting banks about arranging the finances necessary for the company to file for Chapter 11 bankruptcy came flooding in like shoppers for a Black Friday sale. This sent shares of the company down to just 40 cents by mid-day Wednesday, a far cry from its $6.70 share price one year prior.

As it stands today, there are 1,499 open Sears locations — which include regular Sears stores, Auto Centers, Hometown Stores, and Outlets among others — and 733 Kmarts tracked in our Thinknum database. Those 2,272 combined locations are down 280 stores from our last pass over the data in late August, and 1,404 locations from when we first started tracking locations in 2016.

For Sears, most locations that it shut down were in Canada, as it ceased operations of its Canadian subsidiary in January of 2018. 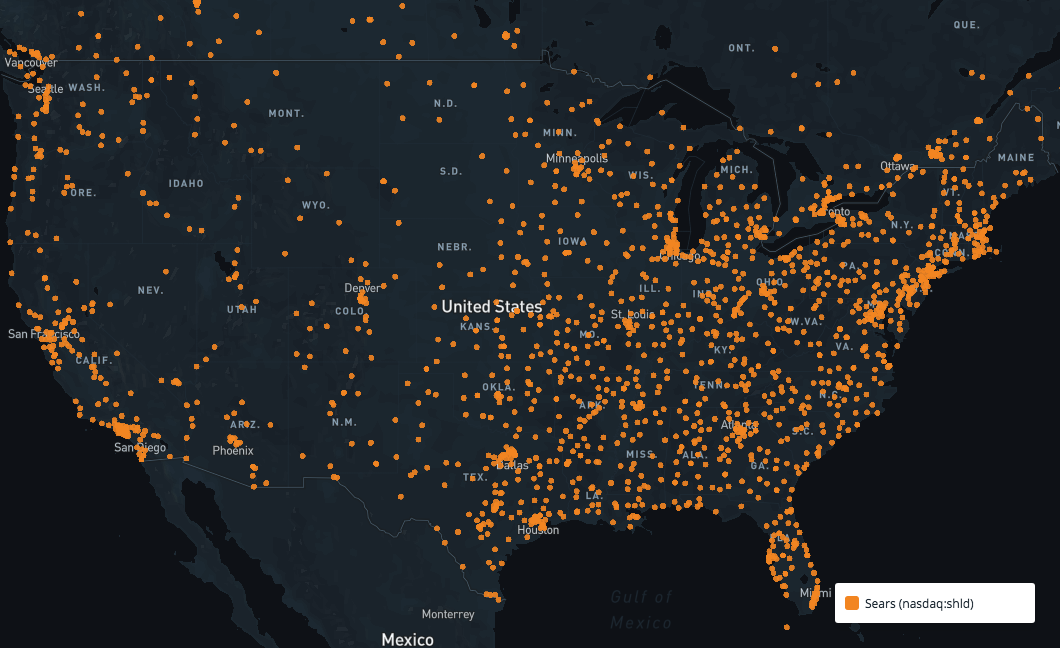 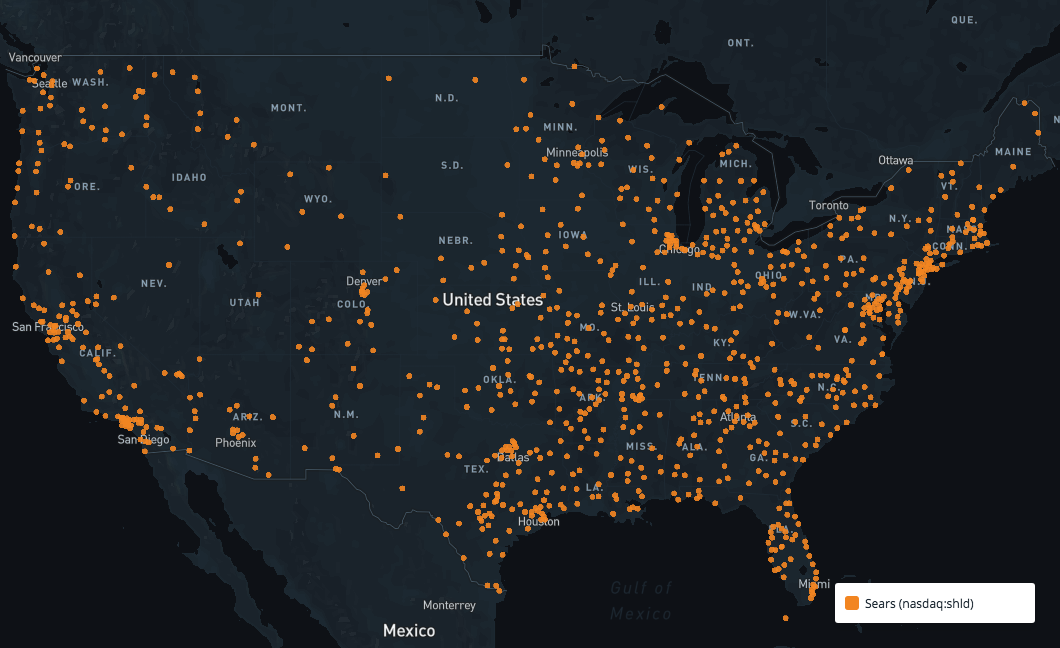 Although it closed six stores in Houston, Sears still operates a sizable chunk of stores in the area. Currently, there are two regular stores, two appliance outlet stores, two auto centers, and a hometown store within city limits.

As for Atlanta, Sears no longer operates any of the four stores the database tracked from there, with the only nearby stores in the metro area located in places such as Douglasville, Kennesaw, and Lawrenceville.

Kmart's decline mirrors that of its parent company; its closures also are from coast-to-coast (and it even had a non-U.S. mainland market in Puerto Rico it shuttered), and affected plenty of non-metropolitan areas. 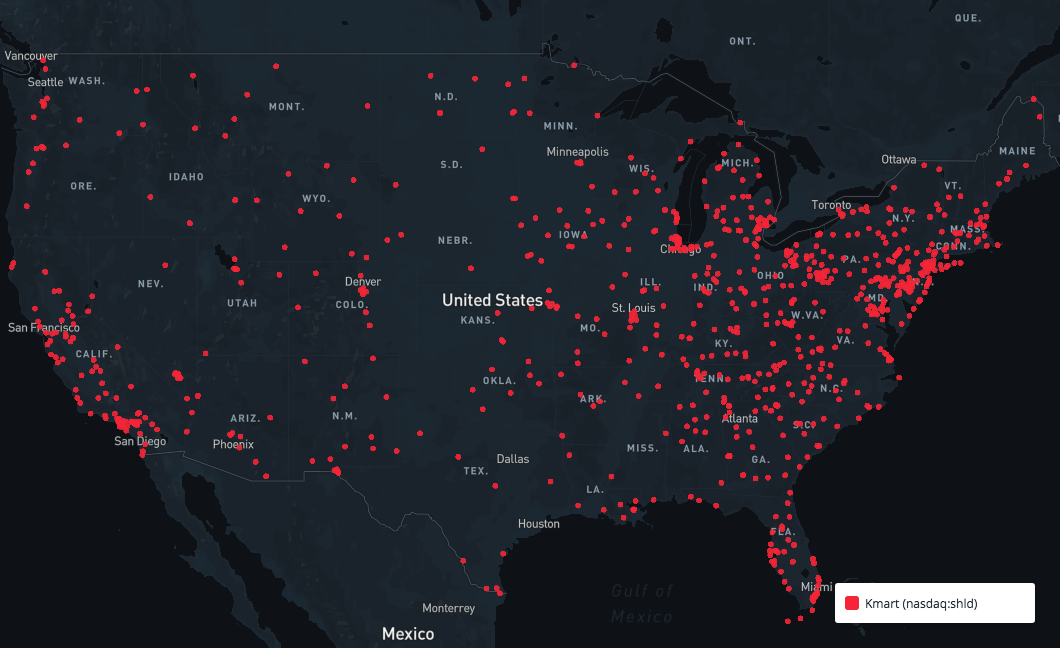 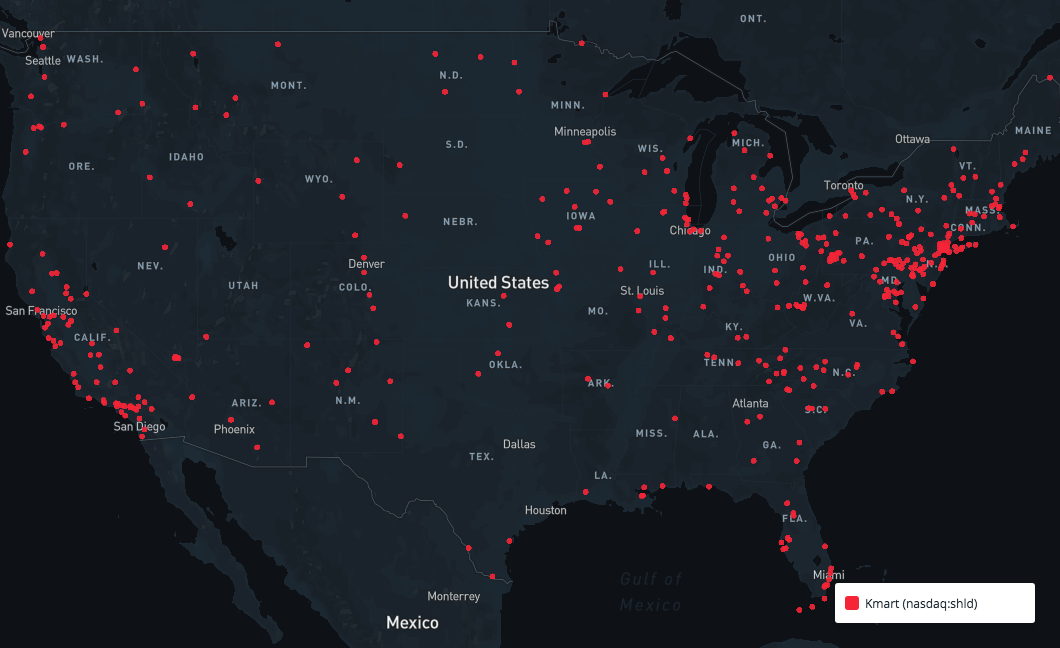 In terms of its biggest cities for closures, Las Vegas and Miami had 7 closed stores a piece, while east of Los Angeles in Riverside, California, 6 Kmarts were closed.

Much like Houston and Sears, Kmart still operates stores in those three markets, but it could not sustain all locations that it originally had while its parent company went into decline.

Along with potentially filing for bankruptcy, Sears is looking to sell its Kenmore appliance brand to ESL Investments, a hedge fund founded by current Sears CEO Eddie Lampert. These moves should help pay off or relieve Sears of debts through outstanding leases and other deals, which in a best case scenario, would allow them to continue operating as a business.

In the worst case scenario, a retailer that once was the world's largest would close its doors after 125 years in operation.