The ambitious, bold and hungry start their week with The Business of Business!
Markets
9.4.18   7:05 PM Markets

Dollar stores take over America as they move in on big-box territory: a detailed map and analysis

Dollar General and Dollar Tree are growing — especially in middle class neighborhoods — while the American economy is booming.

Despite what is, by almost all indicators, a strong economy, the retail industry is seeing its empires crumble, with one-time giants Sears and Kmart closing down locations across America, malls struggling for tenants, and Toys R Us exiting the retail game altogether.

But deep-discount "dollar stores" such as Dollar General ($NYSE:DG) and Dollar Tree ($DLTR) are excelling in this uncertain retail environment; one where consumers are demanding pencils, party supplies and other tchotchkes at the lowest-possible price when they aren't shopping online.

When plotting all of the above big box retailers' locations in the United States — 11,131 stores combined according to our database — against the cheaper competitor, 71.5% of them have at least one dollar store within a one mile radius, with 31.7% dealing with two or more of them.

Both dollar store companies posted solid consolidated sales increases for the second quarter, with Dollar General showing a same-store sales increase of 3.7 percent from the second quarter of 2017. On Wall Street, investors responded to Dollar General's success by sending its stock up $4 from the day of the report (August 30) to almost $110 an hour before the closing bell on September 4.

(Almost) everything's a dollar in over 30,000 locations

Its direct competitor, Dollar Tree and its subsidiary Family Dollar, had a combined growth of 1,016 stores in the same period, despite seeing hundreds of Family Dollar stores close in 2017. In total, there are 30,086 dollar stores between these three brands.

Statewise, these dollar stores dot the Eastern seaboard, but have the most individual locations (3,055) in Texas (click the map for a larger version). 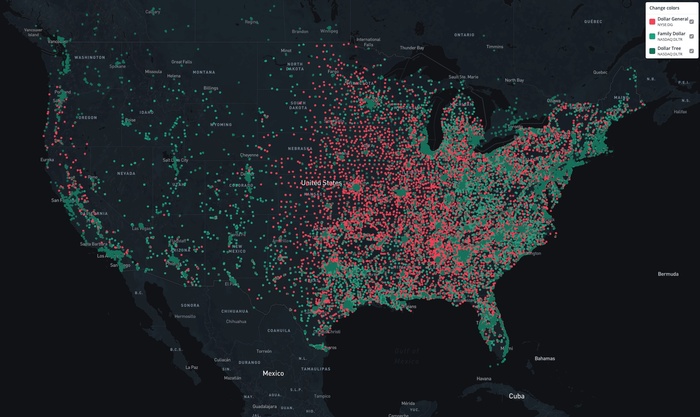 Although the sheer size of Dollar General and the Dollar Tree family's domain is staggering, these dollar stores' tendency to open near traditional retailers is what makes them a threat. As a variety store, Dollar General, Dollar Tree and Family Dollar all sell less-expensive versions of products seen at places such as Target, Sears, KMart, Walmart, Big Lots, Meijer, BJ's and Costco.

When plotting all of the above big box retailers' locations in the United States — 11,131 stores combined according to our database — against the cheaper competitor, 71.5% of them have at least one dollar store within a one mile radius, with 31.7% dealing with two or more of them.

Most often, this retail battle is taking place in middle-class neighborhoods. Out of the 28,738 stores with trackable median income data in our database, dollar stores locations are most common in zip codes with a median income ranging from $50,000 to $75,000, an income band usually associated with the middle class. There are also nearly 10,000 stores in zip codes that sit in neighborhoods where the median income is less than $50,000.

Conversely, here's where the big box retailers are located in terms of income data (out of the 10,311 stores with that data in our database):

Comparing the two location charts, it's clear that big box retailers will still have upper-class customers to cater to. But in middle class areas, where they tend to have the majority of their locations, they're clearly feeling the heat from cheaper competition.

In the San Antonio metropolitain area, where median income is around $48,000, competition is healthy between big box retailers and dollar stores, trending within city limits and becoming more scarce as one enters wealthier suburban areas. 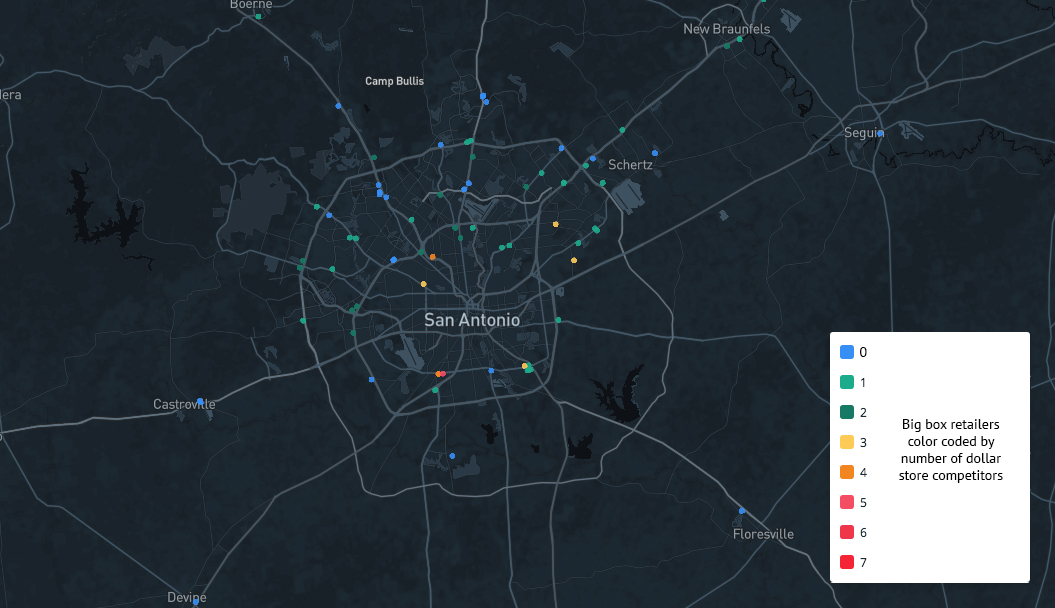 Here's the actual number of actual dollar stores in and around the city, for comparison: 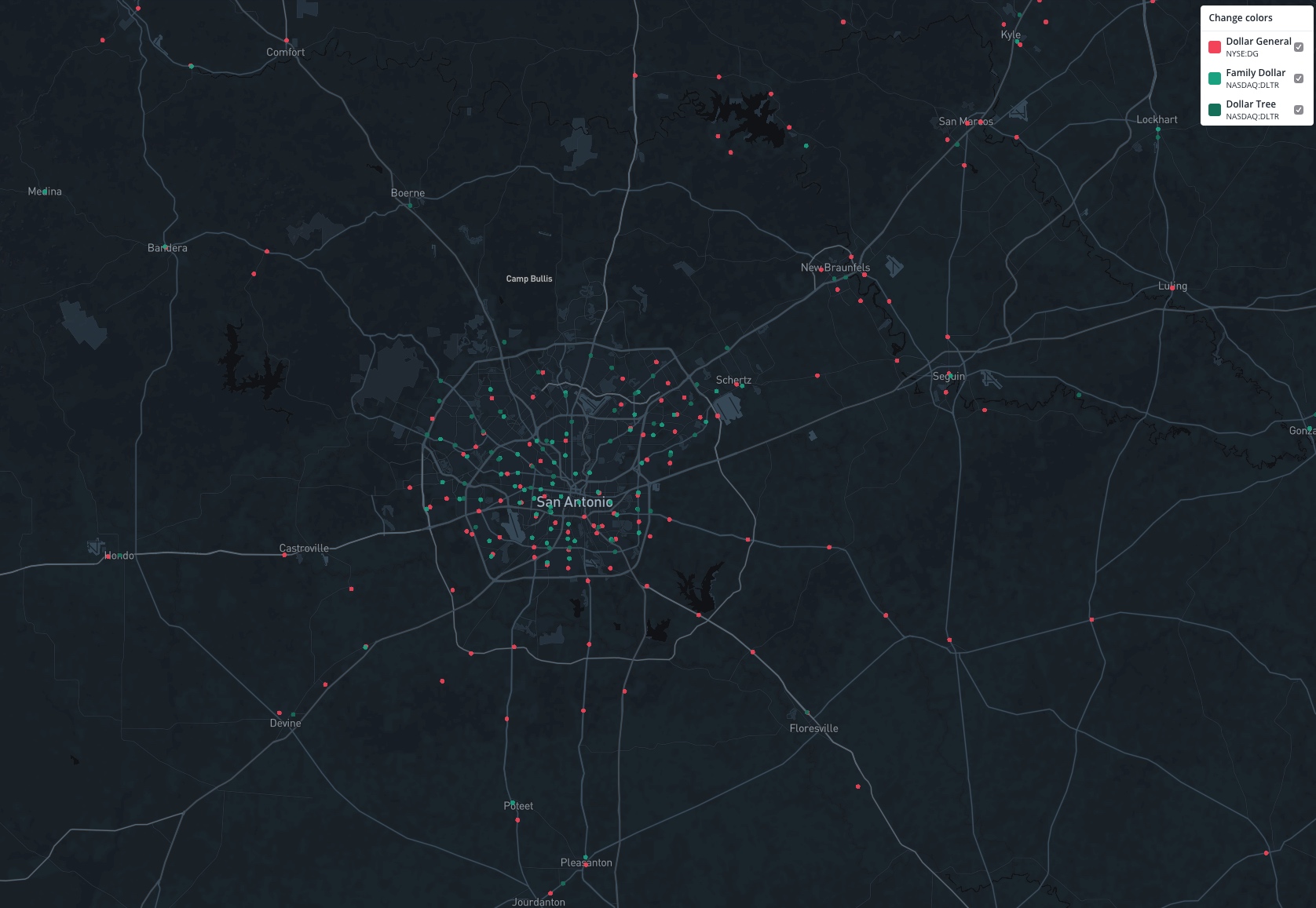 However, when we head south towards the border towards locations with lower median income data, such as Laredo ($39,000), these dollar stores are trying to eat these big box stores alive. In one cluster, there are five or more dollar stores in a one mile radius from a few big box retailers. 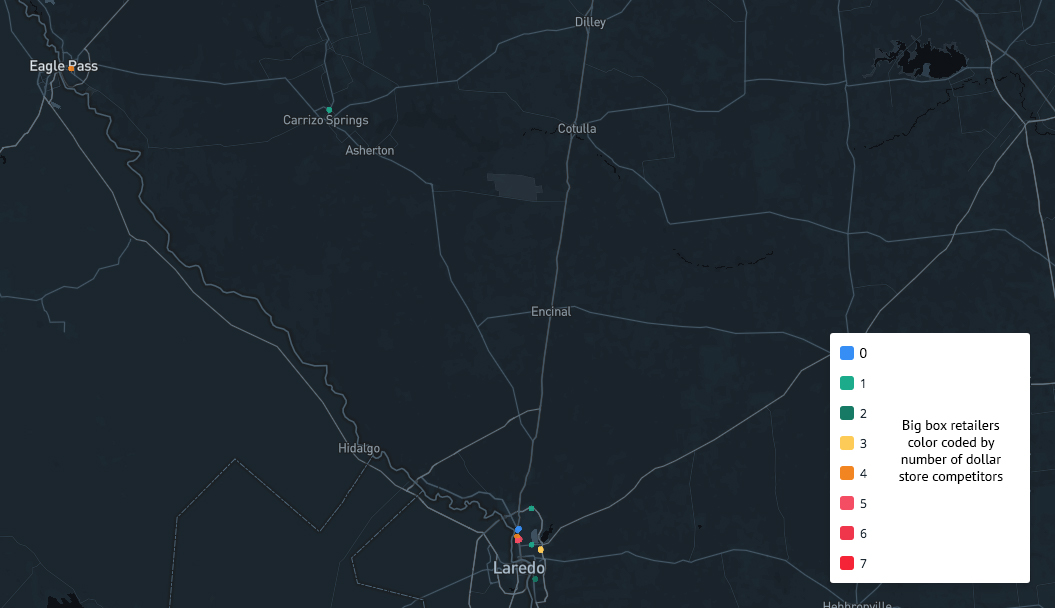 With the threat of tariffs on Chinese goods — including those stocked on dollar store shelves — always looming, this retail takeover may not happen at all. But for now, Dollar General and its second in command Dollar Tree are continuing to wage a retail war against whatever big box stores that are still staying afloat.

Thinknum subscribers can see where all of these stores are on a more granular level, as well as where competition is greatest between dollar stores and traditional retailers.