The ambitious, bold and hungry start their week with The Business of Business!
Markets
5.22.18   2:05 PM Markets

How Planet Fitness is revitalizing the fitness - and retail - industries

When we uncover the data behind Planet Fitness' footprint strategy, a fascinating story emerges.

Ask a serious gym rat and she or he will tell you that Planet Fitness ($PLNT) is for the casuals - no heavy freeweights, "lunk alarms" when people grunt during workouts, and pizza nights. Pizza nights! At a gym! The horror!

But ask the rest of the world and they'll tell you - no, they'll show you by signing up for a membership at one of its 1,500 worldwide clubs and counting - that Planet Fitness hits all the right notes for them. It's inexpensive, it's convenient, it's clean, and, as per its brand, it's judgment-free.

And it turns out that it has a very clear retail footprint strategy: open where other gyms are not, open where people may be looking to turn their health around, and maybe open in communities that need some retail revitalization.

A look at expansion over the past couple years reveals healthy growth.

The above graph indicates Planet Fitness openings over the past years as they appeared on the company's gym-locator website. Recent expansion included three new clubs in Chicago, two in Toronto. and the company has even launched two new clubs in Santo Domingo, Dominican Republic. In January, it also announced expansion into Mexico with a new club in Santa Catarina.

Mapping locations reveals against those of competitors illustrated clearly that Planet Fitness isn't afraid to open clubs in areas with lower median incomes than its competitors. 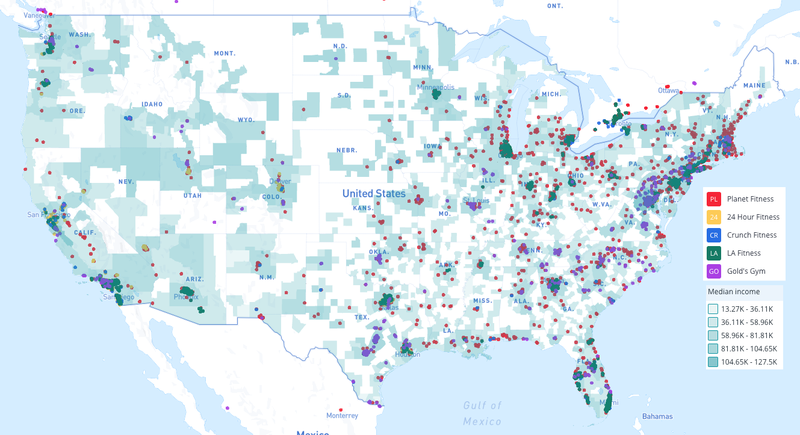 As you see above, Planet Fitness regularly goes after locations where other gyms are not. They also are often in areas with lower median incomes. Other gym chains cluster in high-income, urban areas, while Planet Fitness juts out like pioneers into more rural, lower-income areas. After all, fitness junkies have disposable incomes, right?

It seems, though, that Planet Fitness recognizes that those even with less money like to get in a workout. Membership dues are as low as $10 a month, hardly a dent on many people's budgets for a little fitness.

When we sort by each gym company's average mean income by the zipcodes in which each operates, we see another interesting picture, as illustrated by the bar graph below: 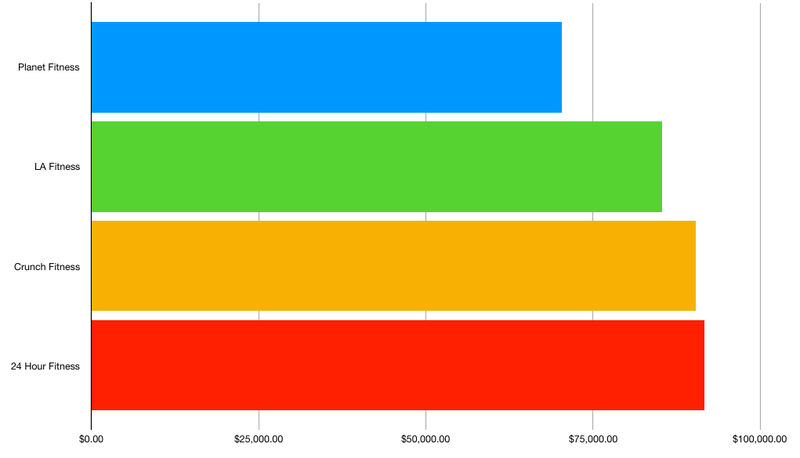 Take one of the more recent Planet Fitness openings at 770 N. Main St., Cedartown, Georgia, for instance. This town outside of Atlanta has a population of just 24,000. According to census data, the median family income of Cedartown is a decidely middle-class $39,252.

Pulling up that same location on Google Maps reveals that location was an nearly closed shopping center in 2011. 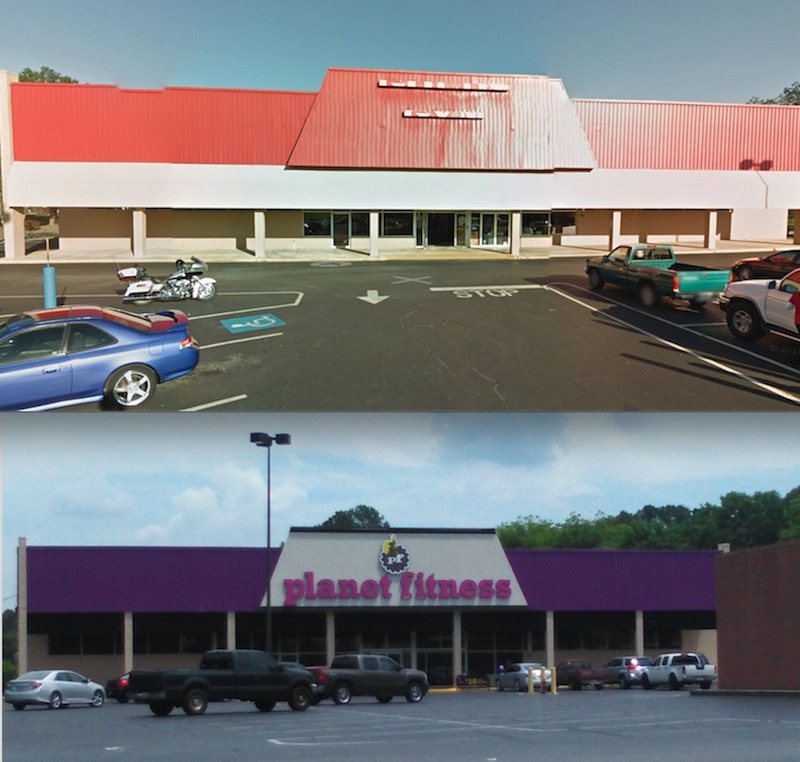 It's a clever strategy: open in areas where the rent is inexpensive, often rehabilitating retail centers as new shopping (and fitness destinations) while attracting new customers who haven't had the chance to join a gym because, well, the other gyms don't open there.