Alternative data generates predictive insights that can signal M&A, product launches, or growth and staffing plans. Here are some of what we saw for 2019 that stood out.

Thinknum Alternative Data covers a number of critical data points that can be used to better explore companies’ health and performance in the digital ecosystem. Factors like job postings, which highlight growth plans or M&A; headcount, which reflects on development history; product reviews and ratings, that tell us where consumers stand - all of these help go into predictive analytics and insights used by investors. 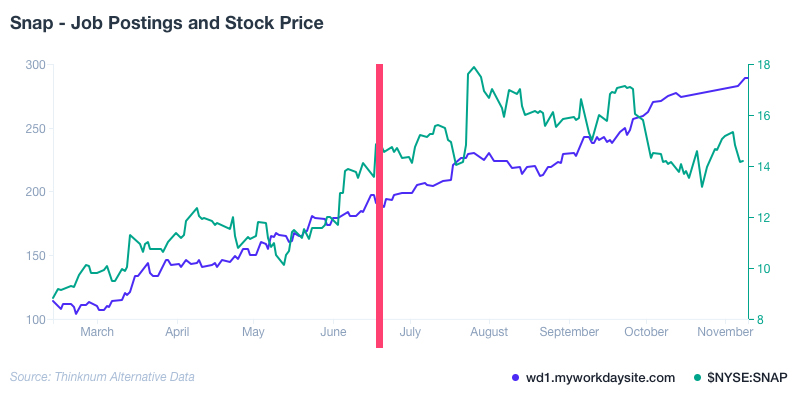 Earlier this year analysts were falling in love with Snap ($SNAP), the social sharing platform, and alternative data backed them up: From their February 2019 low, until mid-June, Snap's job postings increased by more than 80%.

In the time since - which our first chart, above, reflects - job postings at Snap continued to rise an additional 46% (the blue line). And while job postings have continued to grow - particularly supported by a rise in openings for sales roles - Snap stock has lagged behind, as investors soured on many app-based platforms in the wake of the WeWork IPO fumble. Our initial report on Snap's staffing surge came about a month before its big earnings beat that sent shares soaring past the IPO price for the first time in nearly a year.

As streaming entertainment continues to eat away at everyone else’s market share, it’s increasingly likely a platform like Apple’s will be key for the next generation of actors and directors. For the first time, Apple ($AAPL) began hiring more staffers on the software side of its business than on the hardware side, Thinknum Media reported earlier this year. Then, the world learned in September that Apple - pitting its services against that of Netflix, Disney and Amazon, to name a few - would launch Apple TV+ which includes Warner Brothers films as well as original programming including Snoopy, Oprah and Jennifer Aniston.

Furniture and home goods retailer Pier 1 ($PIR) is on the rocks - this year it has already had to reverse-split its stock and decided to shutter about 150 stores, as its share price has tumbled in what's been a good year for stocks. One of the early tells we could use to determine Pier 1 was facing difficulties was its steep rise in average discounts - which we tracked this spring, prior to its big earnings miss:

During mid-May, products discounted on Pier 1's website were done so at an average discount rate of over 22%. That's the highest average percentage discount that we've seen on the company's website since we started tracking the data in April 2016.

Our chart above tracks Pier 1's average discount, and still in the time since the retailer shrunk its footprint, we can tell its price tags have also stayed unseasonably low. All of this means the tough times will likely continue for Pier 1 in the new year.

Target ($TGT) has been one of the top stocks in 2019 and alternative data signaled rising store count and an increase in hiring prior to its May earnings call. So far this year, store count for Target is up 3.31%.

Heading into earnings this spring we saw - thanks to our charts tracking Target's rising store count - and, matching that with job postings charts that reflected staffing growth, the company was at least doing more business. We'll leave it to the analysts to predict whether revenue was gathered more profitably than in previous quarters. After our report, this May when Target reported earnings, shares shot up more than 10%.