The ambitious, bold and hungry start their week with The Business of Business!
People
3.15.19   2:29 PM People

Olivia Jade, who allegedly got into USC thanks to her mother, actress, Lori Loughlin, had a great thing going for her at Sephora, according to alternative data.

Olivia Jade, the daughter of Lori Loughlin, is a freshman at USC. She's also a YouTube star, an Instagram influencer, and she has a successful line of beauty products under her name. She's also among the students caught up in the college admissions scandal that rocked higher education this past week.

Before she was the scourge of everyone who didn't get into the college of their choice, Olivia Jade's cosmetics collection at Sephora ($EPA:MC) was a good seller for the "Bronze & Illuminate palette."

According to review data that began in December 16 and ended on February 1, the "Olivia Jade x Sephora" collaboration was a success among those who reviewed the product publicly.

Reviews of the Olivia Jade x Sephora at Sephora netted out a high average score of 81.25%.

Some of these reviews, such as from reviewer "skyestewart", praised the product for being an beautiful, yet affordable, palette at $28. 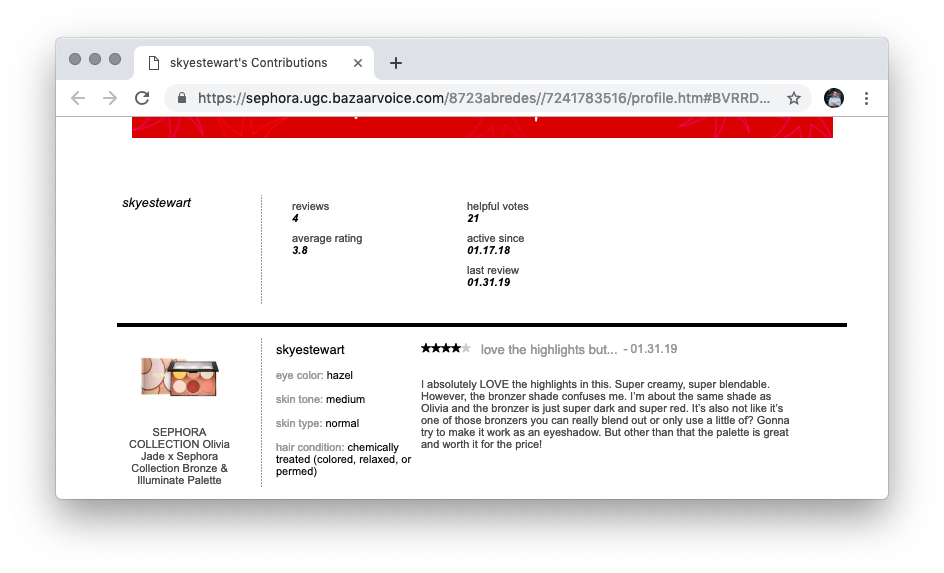 There were also a few critical reviews, but nothing too out of the ordinary. One said that the packaging was not great and it fades over time. 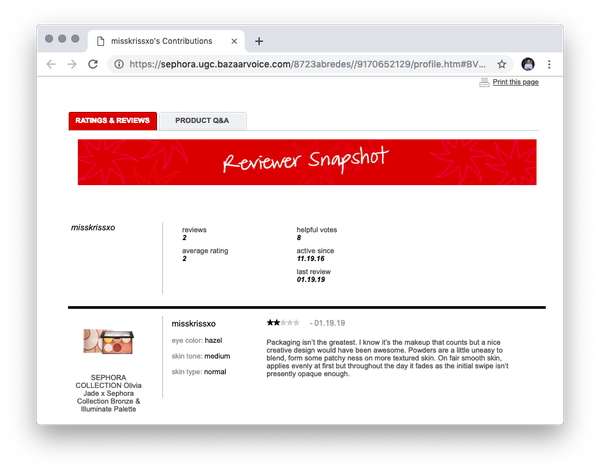 81.25% is an objectively solid rating for Sephora. It put Olivia Jade slightly above the 4-star rating mark and in the middle of the pack of brands sold at Sephora. It also ranked slightly below the average for all Sephora Collection products, which was at 82.91%.

Once news broke of how she allegedly got into USC, reviews for her product on Sephora were bombed with one-star complaints. Although the page is now inaccessable, Google captured the ratings at the tail end of its run. With 263 reviews — over 200 more than when it was last tracked — it had an average rating of 19% due to reviews that, we can only imagine, were overwhelmingly negative and directed towards Olivia Jade, the person.

Keep in mind that the average brand on Sephora (708 in total) had an average of 6,329 reviews, and there were 408,601 total reviews for Sephora Collection products as of February 3, 2019. That means that Olivia Jade's negative reviews after the trolling was just a drop in the bucket for the overall brand... In theory.

On March 14, Sephora distanced itself from the controversy by ending its partnership with Olivia Jade.

Right around when that post was made, the page linking to her product was killed. A web archive captured the link to this page on January 2, which you can check out here.

Who knows what would have happened if Oliva Jade's mother allegedly didn't pay a USC official to give her daughter admission to its undergrad program. However, alternative data trails indicate that her Sephora line would still be up and still be beloved by those looking for a little bit of glow.

While Sephora had to deal with this celebrity-infused firestorm, Ulta and Kylie Jenner continue to make a killing, as we covered in this feature.