Oculus Go was a surprise holiday hit for VR

Holiday sales rank data suggests that VR has some life left in it, especially for Facebook's Oculus.

Virtual Reality has had a bad year. Studios have shut down their VR entertainment labs, and while Facebook ($FB) continues to invest in Oculus, Samsung ($KRX:005930) appears to have cooled its Gear VR promotions.

Across the board, consumer interest diminished for VR. The once-hot VR industry was cooling off.

But there's hope: According to sales-rank data from Amazon ($AMZN), the 2018 holiday provided a small bump for VR sales. Sony's ($SNE) PlayStation bundles had a small run. But the Oculus Go, a $199 stand-alone VR helmet, crept to the top-50 and stayed there.

Beginning around Black Friday, the Oculus Go climbed up Amazon's electronics sales ranks — the 32GB version hitting spot #39 and the 64GB sibling at 87. The units held rank all the way through the holidays when they spiked on or around Christmas Day, with the 64GB Oculus Go peaking at an impressive sales rank spot of #34 on December 26. 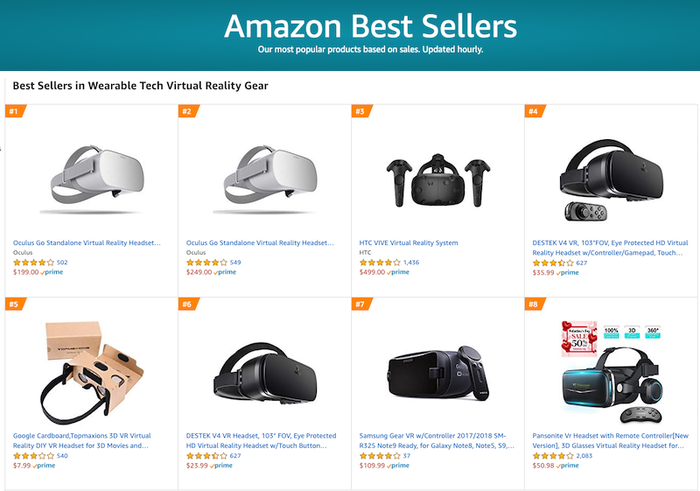 This surprising rise during a time when interest in the medium was thought to be waning is a good, if not great, sign for VR. Even today, within Amazon's "Wearable Tech Virtual Reality Gear" category, Oculus Go's two versions take up spots #1 and #2.

The only other VR device to grace Amazon's top-selling electronics categories was Sony's PlayStation VR, which sold in two bundles during the holiday. Both hit Amazon's top-sellers for a few days each before fading back out.

Meanwhile, HTC's Vive struggled to rank, hitting spot 99 once on December 19 despite a lower price.

But the Oculus Go's rank run leading up to the holidays is interesting. Does the public have an appetite for affordable, stand-alone VR gadgets like the Go? If the inconvenience of strapping into a connected VR helmet was the hurdle that kept consumers from investing in VR, it's possible that this new, lightweight, stand-alone form factor could signal a second-coming marketplace for VR.