The ambitious, bold and hungry start their week with The Business of Business!
Tech
7.5.18   2:42 PM Tech

Of the top-10 best selling videogames at Amazon in June, 8 were for the Nintendo Switch console.

June was big for videogames: E3 created swirls of excitement about upcoming titles and predictions for new consoles from Sony ($SNE) and Microsoft ($MSFT). Videogame publishers created flurries of activity as well, as they launched information about their plans for the upcoming year.

But when it comes to the videogames that were selling to consumers during the month of June, titles for the Nintendo (TYO:7974) Switch absoutely dominated.

In fact, according to Amazon's sales rank data, 8 of the 10 best-sellers were Nintendo Switch titles. 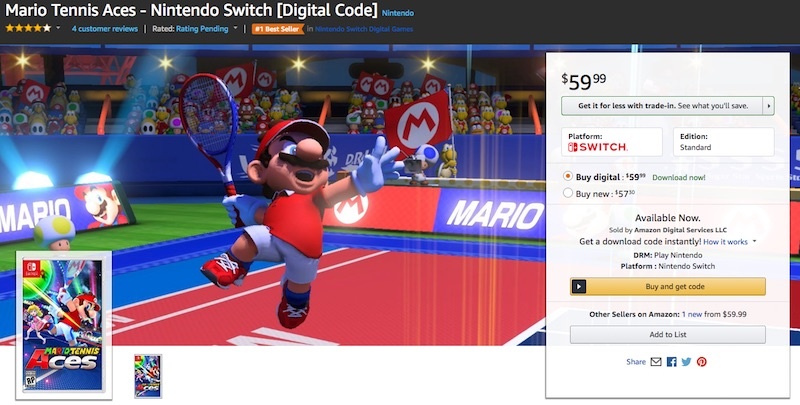 It isn't until we reach spots 7 and 8 where Fallout 76, a title from Bethesda software, graced the top-sellers with average ranks of 31.41 and 40.59 for the PlayStation 4 and Xbox One.

Fallout 76 was announced at E3 and will be released during the 2018 holiday season, which means its appearance on the top-sellers list was for pre-orders.

Similarly, the Nintendo Switch title Pokemon: Let's Go, Pikachu! is a pre-order that will be released around the same time as Fallout 76, but it fared much better in June with an average sales rank of 30.06.

In other words, Nintendo had a very good month.

The above chart represents average sales ranks (of the top-100) at Amazon for the Month of June in the Video Games category. We also counted number of days on the charts as a determining factor to rule out titles that appeared only one or two days during flash sales. In this case, the most days a game remained on the charts in the month of June was 17.

The full dataset can be seen here.