The ambitious, bold and hungry start their week with The Business of Business!
Crypto
3.16.22   4:44 PM Crypto

Artist Mandy Musselwhite and her girlfriend Thorne Melcher created Dastardly Ducks and now Yo Kitties, which they released as a collaboration with Cat Cora.

Mandy Musselwhite and her girlfriend Thorne Melcher were in danger of losing a small farm they own outside of Atlanta earlier this year. But then a stroke of genius — and good fortune — saved them.

Musselwhite, an artist, and Melcher, a former software engineer, put their heads together and came up with Dastardly Ducks, an NFT collection with 10,000 cartoon images based on the Pekin ducks on their property. After they launched it in January, it sold out in less than six hours and made them around $120,000, which was more than enough to keep their home out of foreclosure.

“Ultimately, my girlfriend and I got VERY lucky,” Musselwhite told us.

But that might be just the beginning for Musselwhite and Melcher. Fresh off their Dastardly Duck success, Musselwhite got a message on her Instagram from none other than celebrity chef Cat Cora. Cora, originally from Jackson, Mississippi, was the first woman selected to be an Iron Chef on the Food Network’s Iron Chef America back in 2005. She wanted to release an NFT project with the couple focusing on cat images and raising money for charity.

So Yo Kitties was born. The project raises money for other small homesteaders as well as Ukraine.

“We all knew we wanted the project to be cat themed, and that we wanted to use it to raise money for some good causes,” Musselwhite told us. “It came together pretty quickly, all things considered.”

Obviously, not every artist is a fan of NFTs, or non fungible tokens. Some have said that the trendy, crypto-based movement has allowed for rampant intellectual property theft, costing some artists their livelihoods. Others claim that NFTs are “a ponzi scheme” that will one day crash.

Musselwhite and Melcher provide a view from the other side, however, showing how NFTs can benefit artists. We caught up with Musselwhite, and she explained more about how the couple’s NFT projects came about and what their plans are for the future.

Business of Business: How would you describe your artistic style and inspiration?

My primary style is a blend of both Eastern and Western influences, though the art style that has actually made me successful within Web3 is extremely simplistic (but cute). My current inspiration for the latter comes from all of the animals that surround us on Smol Farm every day! Cute geese, ducks, and kitties— can’t help but to draw cute things when you’re surrounded by those adorable animals on a daily basis!

What drew you to NFTs? You must be aware that some artists have very strong feelings (not positive ones) about NFTs. Why do you feel differently?

I’m half Filipino, so my first (positive) exposure to NFTs revolved around people in the Philippines who were selling art on Tezos. Being on a proof of stake chain, Tezos is extremely environmentally friendly— so it was pretty eye opening to learn about that initially. Learning about Tezos led me to learn more about Ethereum and their efforts to improve their blockchain.

Before NFTs, I was primarily just a commission based artist, and I drew a LOT of stuff that I would have never wanted to draw if I wasn’t getting paid for it. I didn’t even make *that* much doing commissions— about $20k a year while working every single day.

NFTs have made it to where I can financially support myself without having to draw what other people want me to draw— there’s so much more room for creative freedom. Though, I will say that this doesn’t mean anyone can make NFTs and instantly find financial stability— ultimately, my girlfriend and I got VERY lucky. But even if we hadn’t been so lucky, we would 100% still be engaging with Web3 and NFTs. The communities we’ve built and surrounded ourselves with are extremely wholesome and supportive. That, in itself, is priceless.

Tell us about your project Yo Kitties, launched with Iron Chef Cat Cora. How did that come about? How did you end up hooking up with Cat Cora?

Yo Kitties came about after Cat Cora reached out to me directly on Instagram. I’m still very thankful that she did, especially considering my instagram account is private AND I had “sorry, not accepting any followers I don’t know irl” in my bio. Cat, myself, and Thorne got on a call with her about a day after she reached out to me on Instagram and it all instantly clicked. We all knew we wanted the project to be cat themed, and that we wanted to use it to raise money for some good causes. It came together pretty quickly, all things considered. 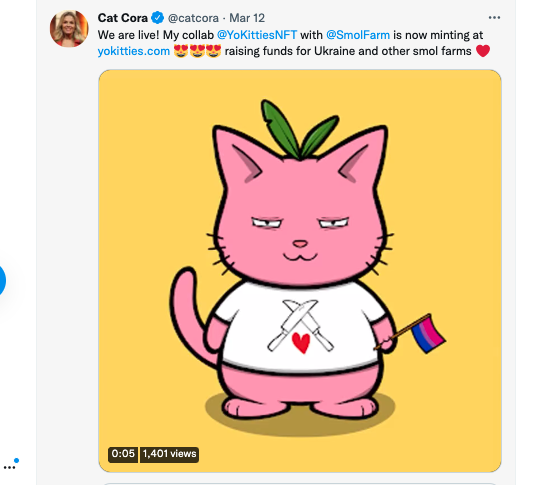 Tell us about the causes it is raising money for. How much has it raised so far?

We’re currently raising money for Ukraine and financially struggling homesteaders! So far, Yo Kitties has donated 1.5 eth to UkraineDAO (about $4,000) and .125 eth each to two homesteaders (about $700 total). Yo Kitties (as of writing this) has only minted about 600 out of 5,000 NFTs, so it feels great that we’ve been able to give a somewhat substantial amount without having met the project’s goal yet. We’ll definitely keep donating as this goes along!

Backing up a little, can you explain Dastardly Ducks, and how that helped you and your girlfriend Thorne save your house and farm?

Dastardly Ducks was our first project, inspired by our Pekin ducks. There are 10,000 NFTs in the collection, and they were each minted within six hours of us deploying the project. Thorne and I were struggling financially thanks to Covid and some unfortunate unemployment circumstances— we were extremely close to losing our house, to the point where our court date was scheduled for two days after Dastardly Ducks was published.

$35,000 was needed to dismiss the foreclosure, and we ended up raising $120,000 total from the Dastardly Ducks mint. I was able to go to the housing company’s attorney the next day and hand them a check for $40,000 (wanted to stay ahead on payments, after all!)— we feel VERY lucky that Dastardly Ducks succeeded how it did. I was so worried about having to rehome all of our animals, but now they get to stay on the farm that they love! 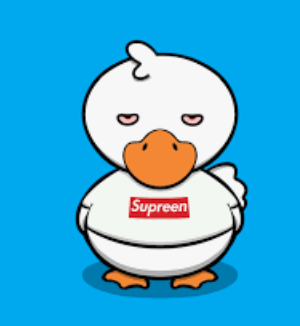 What are your plans for the future with regard to artistic projects and NFTs? Do you plan to do more partnerships?

We’re currently planning ways to further develop utility for Dastardly Ducks and Yo Kitties, while also exploring some fun new ideas for future projects. We never fully fleshed out a proper roadmap for either of these projects, so I’m very thankful for the open-ended paths that we can go down for both of them.

One of the promises we did make for the Dastardly Ducks holders though is that we’d build a new enclosure for our ducks and actually let the holders name the ducklings that we’re raising in it! Supply chain issues have made gathering everything I need to actually build the duck house a bit difficult, but I’m confident that I’ll be able to start building it soon! As far as partnerships, we definitely would love to do more! Though in that regard, there isn’t currently anything in the works.