Neighbor is doing to self storage what Airbnb did to hotels

Can the $38 billion self storage industry be disrupted? Everything about Neighbor.com says "yes".

If Airbnb did to hotels what Uber did to taxis, Neighbor ($PRIVATE:NEIGHBORSTORAGE) is on the precipice of doing the same to self-storage. The company is small: just 34 employees according to LinkedIn ($MSFT).

But Neighbor.com's growth points to a pretty clear future: people have extra space while other people need places to put their stuff, and the $38 billion self-storage industry is due for a shakeup.

Like Airbnb, Neighbor allows normal people — be they private parties or off-the-cuff entrepreneurs — to lease out space in their garage, home, even yard for others to store their things.

As of today, Neighbor has more than 2,400 available lots, garages, basements, and parking spaces in 581 cities across 51 states.

The rapid growth is a testament to the demand for Neighbor's unique product both for customers and those who wish to make some extra money from extra space. Just like Airbnb made it possible to rent a cozy room in a Brooklyn Brownstone, Neighbor makes it possible to grab a corner of someone's bedroom to drop off some finished oil paintings.

The company originally took off in Utah near its Salt Lake City headquarters, and to this day that state remains the most-populated of Neighbor's inventory, with Provo accounting for 148 storage units alone.

Storage around the corner

Neighbor.com's sharing-economy model means that its location outlay splays right into potential customers' neighborhoods in direct contrast to the warehouse-district locations common with traditional storage facilities. A look at Neighbor.com's home turf compared to storage-giant Public Storage in the area shows that virtually any resident of Salt Lake City could access a storage spot just down the street.

And when it comes to dropping things off or picking something up from storage, well, that changes everything.

The Airbnb model to a T

Neighbor.com looks a lot like Airbnb in every way except for the pictures which, in this case, feature images of empty garages and parking lots to entice those in need of a place to put their stuff. 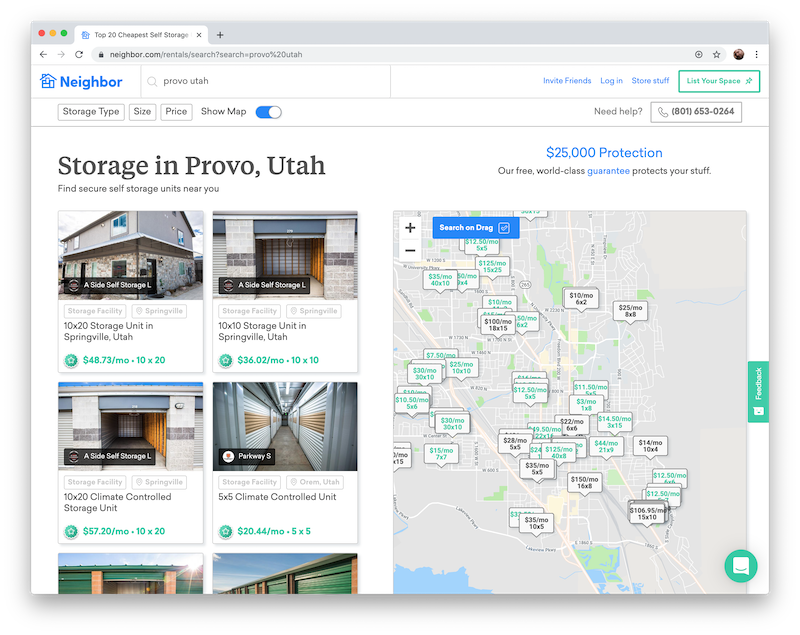 Aside from the implied benefits of lower costs for customers and opportunities to side-gig for those who wish to rent out their space, Neighbor has given rise to a fascinating taxonomy of different types of spaces than those you would find at traditional storage facilities. And that's exactly why it seems to be working. Need a garage corner down the street for your project car? A basement up the street for your snowblower that you'll need in a couple months?

While the standard "Storage Facility" is the most commonly viewed (and as such in demand) on Neighbor's website (more than 20,000 views), there are also basements, RV Pads, even Bedrooms available for people to store their things. Those latter items are not the kinds of storage spaces you would find at, say, Public Storage or CubeSmart.

Neighbor's co-founder and CEO Joseph Woodbury cites the company's unique inventory as its ace in the pocket.

“It’s not just garages and basements and driveways,” Woodbury told CNBC. “We’ll have people put up barns, their old barn, and they’ll store classic cars in their barn. We have people put up even small spaces in university towns. People put up a closet, and students will come store two or three boxes in their closet.”

So far, Neighbor is running lean: it's raised $4.1 million in two rounds and is reportedly closing its next round of funding. Current investors include Peak Ventures and Pelion Venture Partners. Given the company's "no duh" model and growth as outlined here, the next funding round may be much, much bigger.

Thinknum tracks companies using information they post online - jobs, social and web traffic, product sales and app ratings - and creates data sets that measure factors like hiring, revenue, and foot traffic. Data sets may not be fully comprehensive (they only account for what is available on the web), but they can be used to gauge performance factors like staffing and sales.