The ambitious, bold and hungry start their week with The Business of Business!
Markets
6.25.19   5:06 PM Markets

McDonald's Japan is now the third-most tagged place on Facebook

Or, go to Japan to go to McDonald's (NYSE:MCD), order a Big Mac, and post a selfie.

No, really. Facebook "Were Here" data, which tracks the number of status updates and selfies mentioning a brand or location, has revealed an emerging trend: tourists are flocking to McDonald's Japan ($TYO:2702) and posting about it.

As of June 24, "Were Here" counts for the McDonald's Japan Facebook page have swelled to nearly 35 million. That puts it in the top-three of all Facebook pages we track. In fact, it puts it head of McDonald's proper, even.

That's right: as of March 2019, McDonald's Japan is getting more social-network foot traffic than the rest of the worldwide franchise. This fact is doubly amazing when one considers that McDonald's Japan consists of nearly 2,975 locations — a fraction of the 14,146 locations in the United States alone.

This new finding puts McDonald's Japan's "Were Here" count ahead of not just McDonald's itself, but also Olive Garden, AMC Theatres, and Applebees.

The reasons why are likely numerous. First off, McDonald's Japan features a slightly different menu, where visitors can try an Ebi (shrimp) burger or simply take a picture of a Big Mac that looks like it was meant to look (as opposed to the often messy construction one finds in the States). 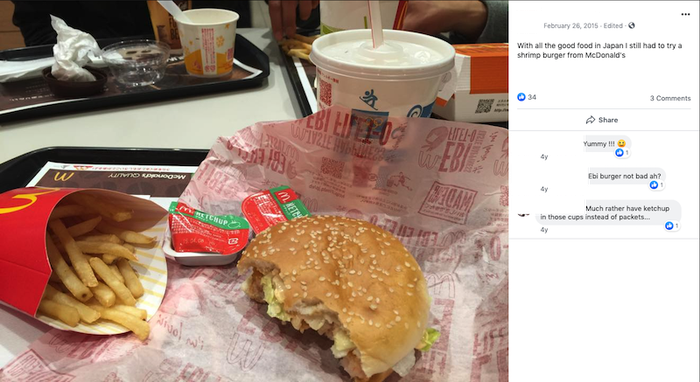 It could also be that, while food in Japan is amazing for those with adventurous palettes, McDonald's isn't just plentiful in the land of the rising sun, but it also provides a comforting bit of familiarity to those who just want some fries.

Either way, McDonald's is big in Japan.