Chicken sandwiches are good for the brand's social media accounts. But, mysteriously, McDonald's stopped posting on Facebook in November.

As we've reported here before, 2019 was the year of the chicken sandwich. Even fast-food stalwart McDonald's ($MCD) got a piece of the action, gaining 10,000 Twitter followers in August when the Popeyes vs. Chick-fil-A chicken war first broke out.

And this week, McDonald's is doubling down on the chicken sandwich by introducing a pair of chicken-based breakfast sandwiches called Chicken McGriddles and McChicken Biscuits.

The ensuing Twitter party is working out for McDonald's: since January 23, its Twitter account picked up thousands of new followers: its best follower run since the chicken wars of August 2019.

The brand has been active on Twitter, as well: it's now tweeted nearly 580,000 times, and shows no signs of slowing down.

Clearly, Twitter is where it's at when it comes to McDonald's social networking efforts.

But over on Facebook, where McDonald's commands a massive audience of more than 80 million followers, the brand has gone strangely silent in the new year.

According to what we're seeing, McDonald's most recent Facebook activity took place on December 9, 2019, when it changed its Facebook page cover photo. 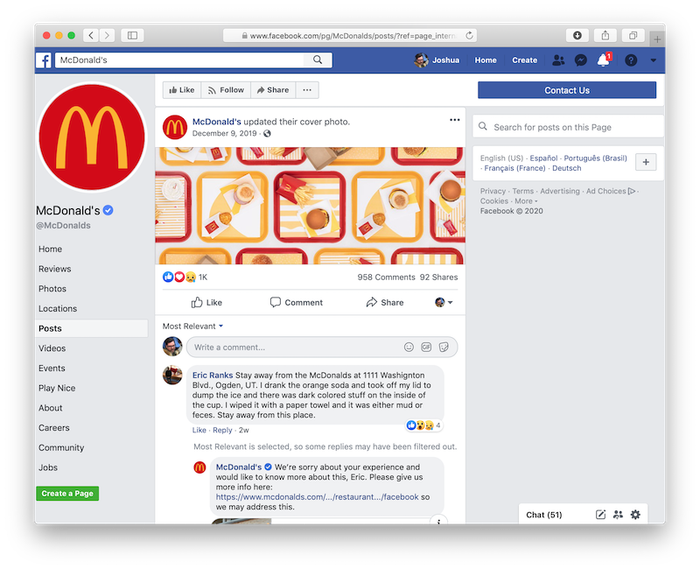 It seems that, very strangely, McDonald's avoided any Facebook activity throughout the entire 2019 holiday and into the new year. This, despite the fact that it commands a massive follower audience. Add to that a recent uptick this week when the brand launched the new breakfast chicken sandwiches, and we're scratching our heads over this.

That said, it's clear that McDonald's continues to monitor its Facebook page. It has replied to a few customer complaints and questions on the page that were posted as replies to its most recent posts. However, it hasn't created any new posts.

We reached out to McDonald's to provide some context here and will update this story if and when we hear back.