The ambitious, bold and hungry start their week with The Business of Business!
Markets
2.6.19   2:01 PM Markets

Kondo's "The Life-Changing Magic of Tidying Up: The Japanese Art of Decluttering and Organizing" shot back to the top-10 after her Netflix series debuted.

Marie Kondo has been massively popular for years, but it wasn't until her recent Netflix ($NFLX) series that American audiences really experienced the "Kondo Effect". Whether it's people throwing away household items that don't spark joy or simply sending off clothing to second-hand shops, her minimalist influence is real.

Her series has had another major effect: her book, The Life-Changing Magic of Tidying Up: The Japanese Art of Decluttering and Organizing, jumped up to the top-10 of Amazon's ($AMZN) books category, averaging out January as the third-best-selling book for the entire month.

Marie Kondo's book has been available for some time now. In fact, it was a top-10 seller at Amazon as far back as 2016. But her new Netflix series, launched on January 1, 2019, displays the power of television — and Netflix.

Kondo's book sales reflect massive interest in de-cluttering and in the author herself. A Google trends "interest over time" graph reflects the January spike as well. 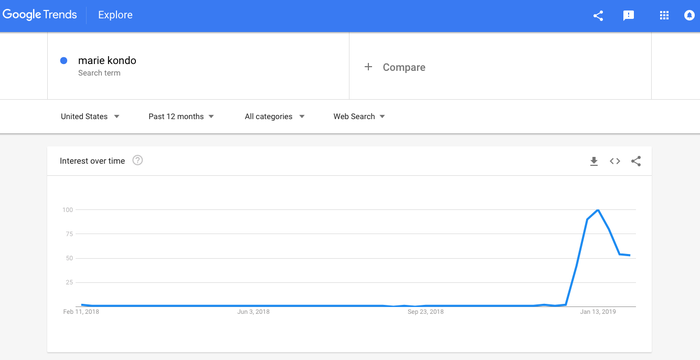 It is interesting to note that the Kindle version — the version that would not add any clutter to one's home or bookshelf — did not rank in the top-10 in January. It ranked #168.