The ambitious, bold and hungry start their week with The Business of Business!
Innovation
3.21.19   1:32 PM Innovation

Lyft has been hiring for autonomous vehicle experts for some time. In fact, the number of openings have more than doubled in the past year.

At an IPO road show, Lyft ($PRIVATE:LYFT) Chief Financial Officer Brian Roberts told potential investors that it would phase in self-driving vehicles on simple routes in order to cut down on the company's high insurance expenditures.

While this is a new development in terms of Lyft's public aspirations in the autonomous vehicle space, the company has actually been hiring for autonomous vehicle experts for some time and, in fact, the number of openings have more than doubled in the past year.

Lyft categorizes all of its autonomous vehicle positions — i.e. engineers, product developers, and executive assistants — and, on August 15, 2017, it only listed two positions in such categories. By April 25, 2018, it had openings for 17 positions that had something to do with autonomous vehicles.

After a gap in data from April 26 to June 1, the feed showed that Lyft had 37 job openings in the autonomous vehicle categories. There were up to 47 individual listings for autonomous positions on Lyft's official careers page, and as of March 20, there are 42 job postings in these categories.

The most common category for autonomous jobs on this date were in Software (25), followed by Hardware (15), then Product (3), and finally a tie between Business and Mapping (2). The majority of these positions are for engineers of all sorts.

Also of note: Lyft is lawyer-ing up

On June 2, there were only 5 job postings for Legal department positions. On March 25, it was at 11 — more than double what it was eight months prior.

Among these positions is one for a product attorney that specifically deals with autonomous vehicles. The listing has been up since February 8, 2019, and explicitly states that this person would "advise our [sic] AV teams on products liability and regulatory compliance issues related to autonomous vehicle development." 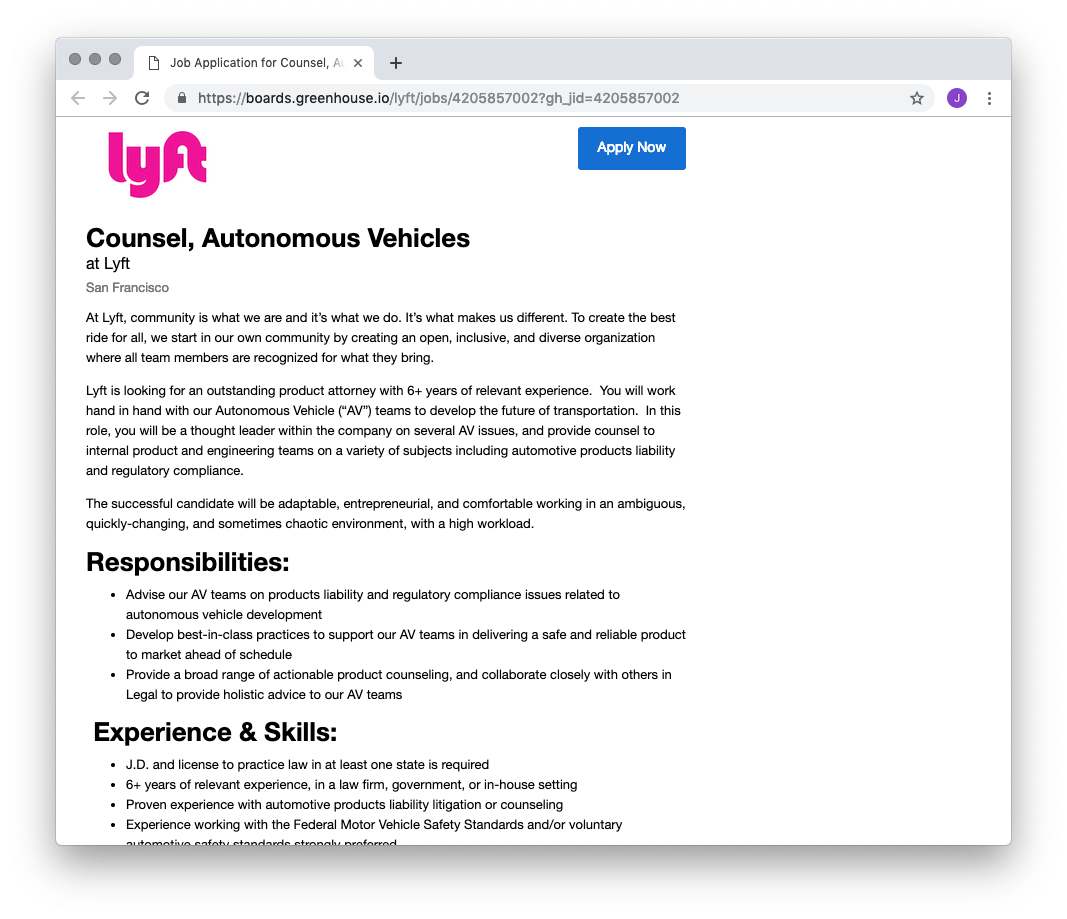 Lyft has hinted at, as well as worked on, self-driving vehicles for its company far before 2019. But with this uptick in hires and a looming IPO, this reality may come sooner rather than later.