The ambitious, bold and hungry start their week with The Business of Business!
Markets
1.23.19   5:16 PM Markets

Luckin Coffee has only been around for two years. And yet, it is a unicorn startup that threatens Starbucks in China. Here is how they are potentially pushing out the great American coffee giant.

Perhaps the number-one worst blunder is getting involved in a land war in Asia. The second, of course, is to never go in against a Sicilian when death — or coffee — is on the line.

Starbucks ($SBUX) managed to do both of these over the past two decades, and while its Italian venture is proving to be a surprising success, its large presence in China is under threat by a new, agile, and fierce competitor.

Luckin Coffee ($LK), a China-based private coffee chain founded by Jenny Qian Zhiya, was considered a unicorn IPO after raising $400 million across its seed and Series A funding rounds. It is also set to IPO on the Hong Kong market.

How much is Luckin Coffee a threat to Starbucks? Besides undercutting their competitor on prices, the chain is targeting the same demographic that Starbucks wants... With an added home field advantage and an aggressive growth plan.

Starbucks planted its roots in Beijing back in 1999. It has grown to 298 stores there, but its presence in financial hub Shanghai has exploded to a massive 682 locations, a reflection not just of the city's size but of the locals' thirst for coffee. Starbucks' footprint in China reads much like a list of "tier 1" and "tier 2" cities — a term used when describing where businesses should set up shop or expand.

The strategy is clear: Starbucks targeted locations with the most wealth and people per capita in China. It reflects the brand's expansion and footprint strategy in the United States, especially in its nascent days.

Luckin took a similar "tier one" city approach, launching in Beijing and subsequently building presence steadily in China's biggest cities. While it has less than half the number of locations as Starbucks in Shanghai and remains behind in Hangzhou and Suzhou, Luckin out-muscles Starbucks in Beijing, Guangzhou, and Shenzhen, among others.

Luckin isn't done, either: It has plans to open a store every 4 hours in the country. Starbucks said it would open up a store every 15 hours.

Luckin's aggressive growth strategy is clear: open fast, and eat Starbucks' lunch (or those sandwiches they sell for $6). Of Luckin's locations, 1,100 stores are within a .25 mile radius — or about a five minute walk — of a Starbucks. That means that 46.2% of its stores — or nearly half — are already operating in Starbucks' retail territory. There are several Luckin stores that are about 15-30 feet from a Starbucks, just a few stores away.

The above chart shows the number of Starbucks locations within a quarter mile of Luckin Locations. In one case, one Luckin location has a whopping 13 Starbucks within walking distance. Another has 12 nearnby.

Luckin and Starbucks on the Map

Because we track locations for both Starbucks and Luckin, we can not only compare the hard numbers behind each company's expansion strategy, but we can also visualize what this competition looks like on a map. 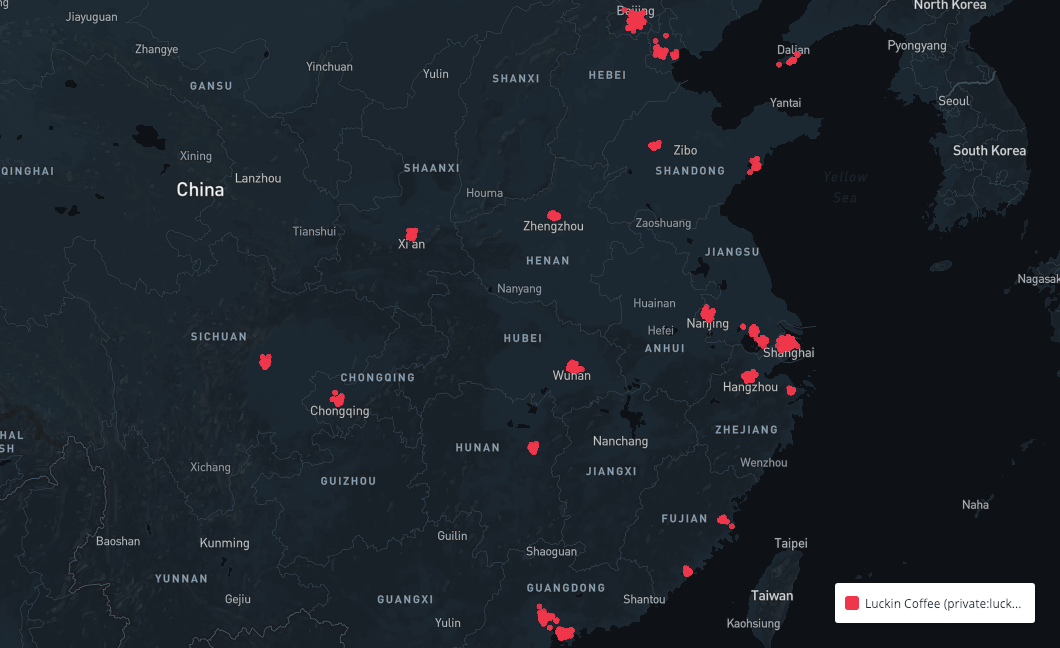 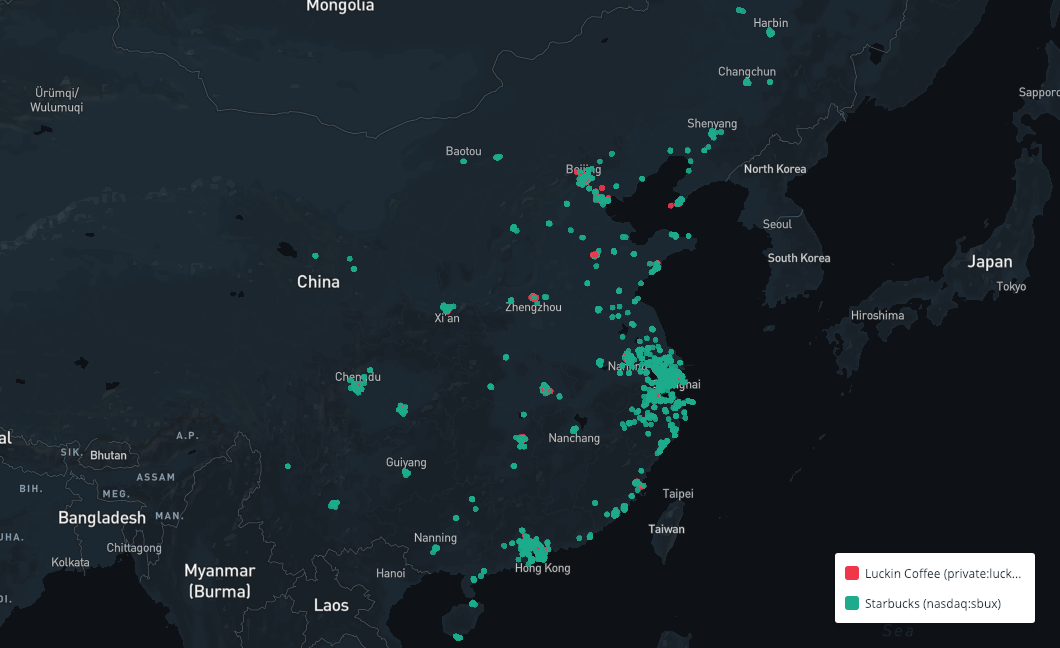 On the surface, it may seem as though Starbucks is dominating Luckin when it comes to locations in China. However, metro area closeups reveal that the two are fiercely competing on a block-by-block basis. 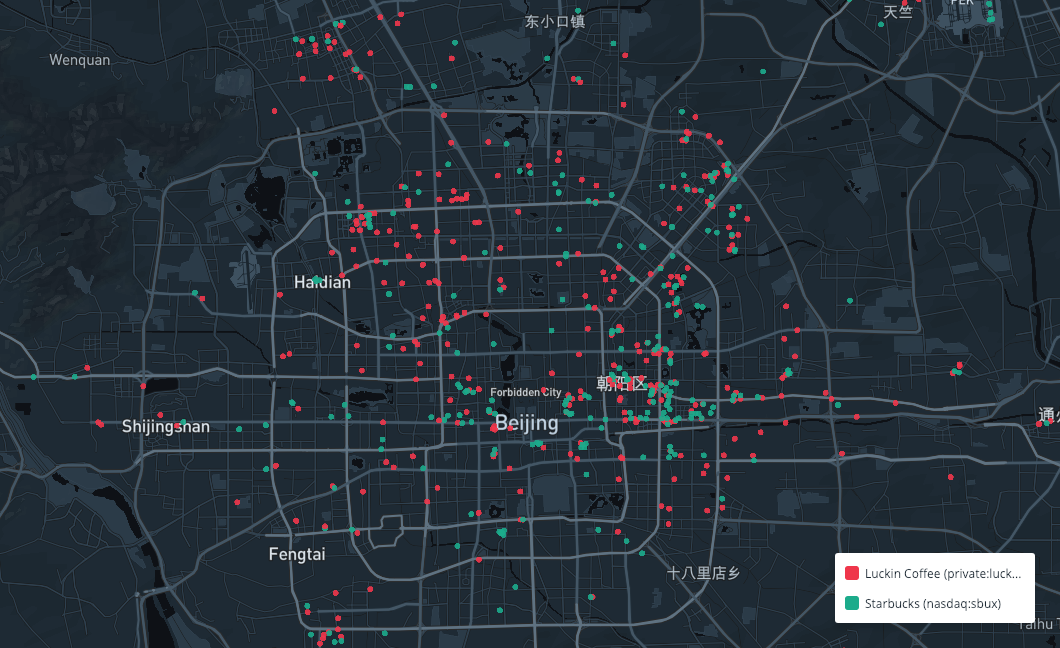 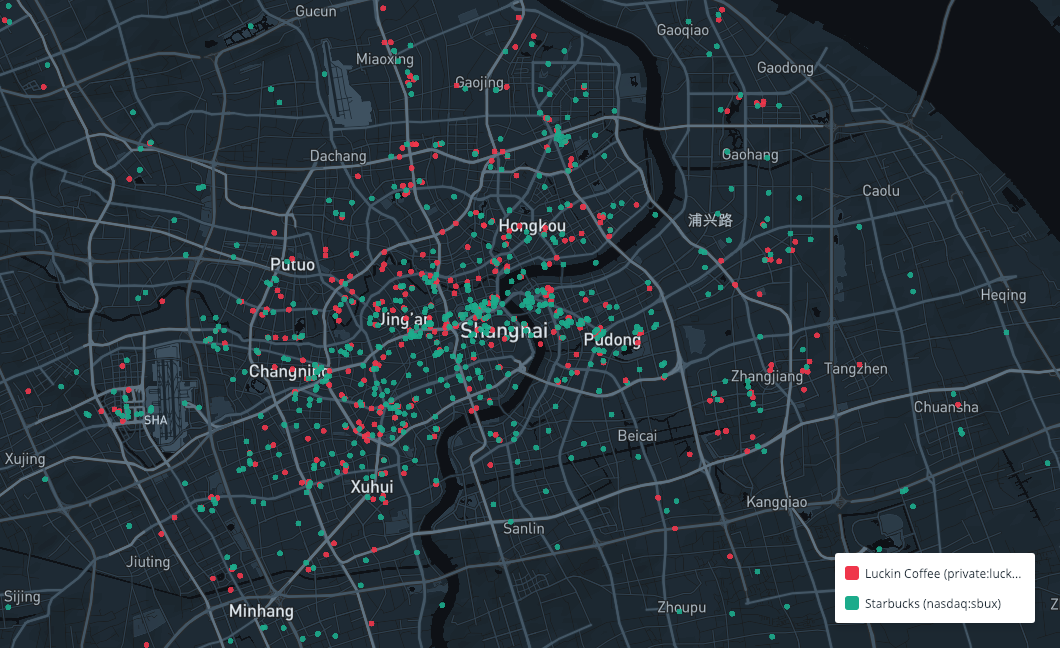 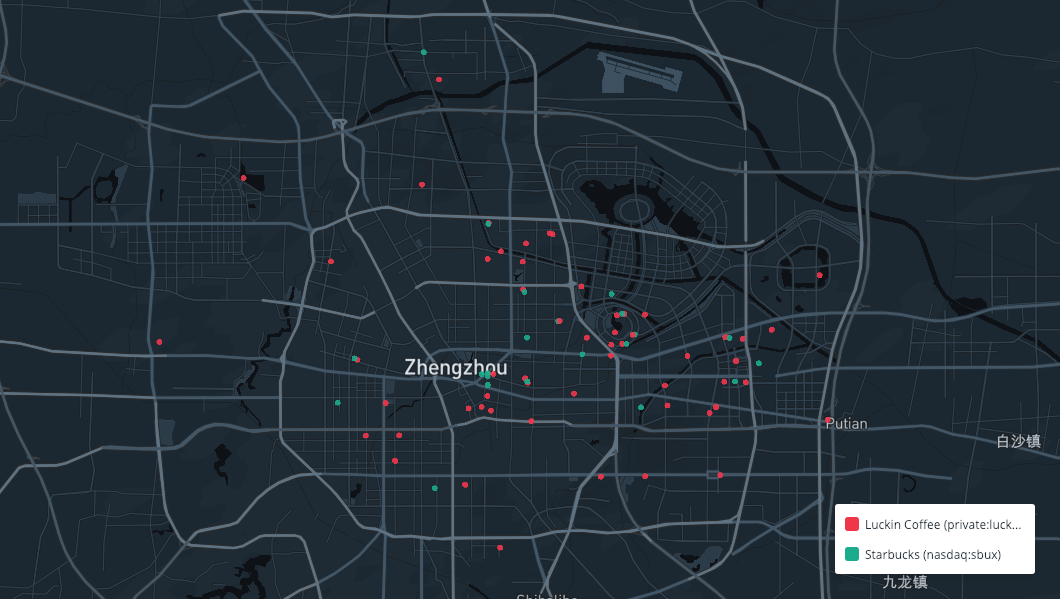 Interestingly enough, Luckin has opened zero Hong Kong locations so far. Then again, Hong Kong is a "special administrative region" and has its own rules in terms of trade, imports, and business practices. 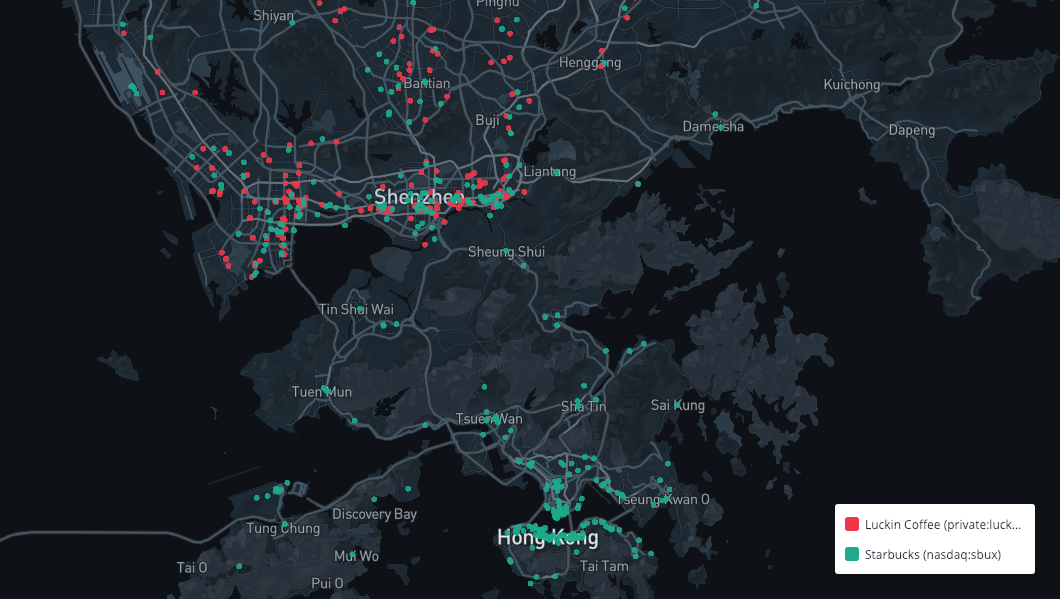 One major caveat: how Starbucks and Luckin serve coffee

Luckin Coffee isn't a Starbucks clone. Far from it, when considering how its stores are set up.

While Starbucks have cafes in most, if not all, of their locations. Luckin primarily runs smaller shops where customers can place orders for pickup or delivery. It does not accept cash, rather all payments are done through the Luckin app, sort of like a Starbucks card on a mobile phone.

Essentially, Luckin's tech-based model makes it nimble enough to open up stores quickly and undercut competitors with cheaper pricing (less overhead due to less employees at shops) and its robust delivery service.