The ambitious, bold and hungry start their week with The Business of Business!
Markets
2.15.19   5:36 PM Markets

Jimmy John's is taking a risk by sticking to its own delivery in spite of Uber Eats and GrubHub... But is it the smartest decision?

Jimmy John’s ($JIMMYJOHNS), the classic sub-sandwich chain, is rebelling against the new power players of delivery — Uber Eats ($UBER) and GrubHub ($GRUB) — with a social media campaign that calls into question the reliability of these services.

In the last ten years, the entire food service industry has been transformed by the advent and proliferation of delivery app services. For some, this has added delivery service to what was previously an exclusively in-house dining experience. But for others, for whom delivery is an integral part of their business, this new paradigm has been disruptive.

Jimmy John’s is one of the latter, and its defiant new marketing campaign attacks the unreliability of third-party delivery mishaps. It’s all detailed in a series of increasingly comical tweets from customers about late or botched deliveries.

As a New Yorker who orders out more often than I care to admit, I can say: Jimmy John's is not wrong. A late order has a funny way of ruining one's day, and it can discourage one from ordering from the same restaurant, again even when it’s not the restaurant’s fault. If the measure of good food service was delivery alone, we’d have nothing more to say about it.

But there’s another explanation for Jimmy John’s pivot, as shown via Facebook check-in data that suggests the sub shop’s challenges extend beyond botched deliveries.

Last summer, Jimmy John's customers stopped checking-in via Facebook ($FB) like it was going out of fashion. This could be linked to changing customer attitudes about heading in to a shop versus ordering delivery via an app. Back in the barely-online, pre-Uber Eats naughts, when I was an undergrad in college, Jimmy John’s was more than a sandwich shop. It was a gathering place to commiserate about college finals or to catch up on gossip.

Although the check-in data can be explained in a potentially positive way, the sub shop’s Twitter ($TWTR) followers have also been declining since 2018. And when a brand’s Twitter is on the decline, there are few good things to be said about it.

But, even freakier, Jimmy John’s saw an unprecedented upsurge in Facebook Likes in May 2018, which has since cooled into a steady decline. Looking back to Summer 2018, the only newsworthy item related to the the sub shop is about how a delivery guy from Iowa busted a cheating boyfriend, much to his chagrin and the community’s satisfaction.

In lieu of an annoyed cheating-boyfriends conspiracy against Jimmy John’s good-samaritan attitude, we can assume these drops in social media activity are what happens when a brand that lacks monopoly becomes just one logo amid many, scrolling meaninglessly by on delivery apps, which can lead customers to identify less with the atmosphere and employees of the actual store than the speed and quality of delivery alone.

drops in social media activity are what happens when a brand that lacks monopoly becomes just one logo amid many, scrolling meaninglessly by on delivery apps

The mega-chain of restaurants called McDonald’s ($MCD) signed on for more of the latter when it launched a partnership with Uber Eats in 2017. A recent earnings call reported that 19,000 McDonald’s restaurants offer delivery worldwide, making it a $3-billion-dollar international business. And, according to CEO Steve Easterbook, McDonald’s is making delivery a “high priority” in 2019. 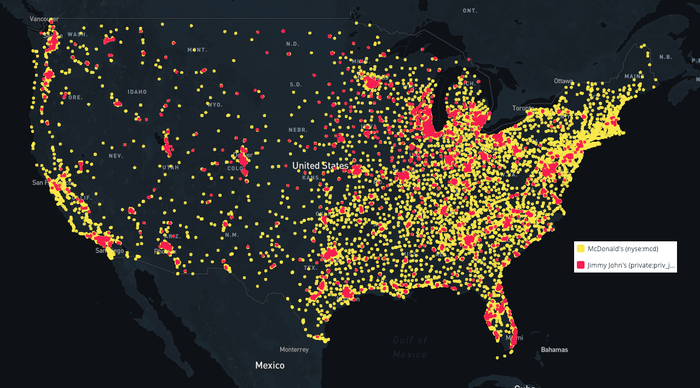 But while other restaurant chains cut deals with food delivery apps, adapting to digital-centric consumerism without protest, Jimmy John’s saw an opportunity to divert customer attention from falling social media clout to appeal to the very thing third-party delivery apps are supposed to be doing, while at the same time implying that other brands may not care at all.

Jimmy John’s has only 2,800 stores -- all domestic -- and so needs to maintain locally-grown loyalty. And while customer complaints are serious, the data shows that social media fallout has an equal (if not primary) role in their clever pivot.

Why not give in to progress?

No sane business will claim to be the last vestige of an endangered form of service, just for old-time’s sake. Even if you have product that’s objectively the best in the market, simply being right isn’t enough to succeed. Long ago, when the Sega Dreamcast ($SEGA) game system came out, it was the best in terms of graphics. But not looking to the future, it was eventually outdone by Sony ($SNE) and Nintendo ($TYO:7974), and had to subsequently give up on proprietary game systems. But when an entire industry of similar products faces one megalithic problem, there’s another option: you can step out of line, find something that everyone else has taken for granted, double-down, and leave the rest to catch up. This old-hand marketing strategy was even dramatized in a former-media darling called “Mad Men,” where it depicts the company Lucky Strike ($LUCKYSTRIKE) consulting an advertising agency for rebranding, following the mid-20th-century emergence of the surgeon general’s warning about cigarettes.

Whether other restaurant chains follow Jimmy John’s rebellious lead has yet to be seen, but there’s no doubt that brands of every industry need to find creative marketing solutions to provide unique alternatives to the challenges of mass-digitization, or join the future.