How big is has Prime Day become since 2015? A look at the data

Prime Day is growing in popularity, as evidenced by "talking about" activity on Facebook from Prime Days past

You may have noticed from dozens of headlines that today is Prime Day, the day on which Amazon ($AMZN) drops prices and moves inventory. It's become a big deal — almost as big as Black Friday.

The above graph illustrates people "talking about" Amazon on Facebook since July 2015. The bar chart below illustrates how chatter from announcement date to Prime Day itself to post-Prime Day chatter increased every year. 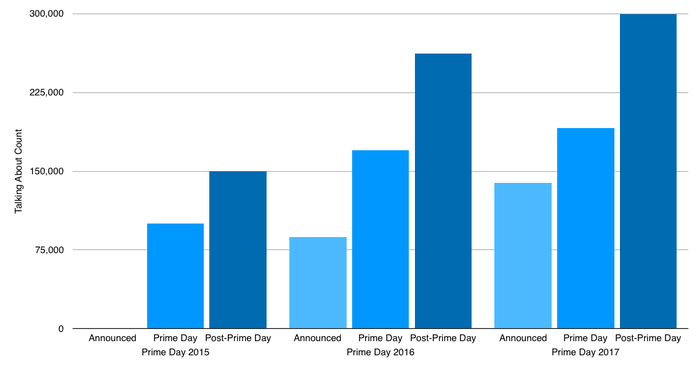 This is the first year we have some data on Prime Day chatter. In 2015, Prime Day fell on July 15. On that day, conversations about Amazon jumped from 100,000 to 150,00 in just two days by July 17, presumably when people were chattering about the deals they scored.