The ambitious, bold and hungry start their week with The Business of Business!
Markets
10.16.18   1:51 PM Markets

Houston, Texas is nationally recognized as a culinary mecca. It's also the place with the most fast food locations from the six biggest brands in America.

On the official tourism page for Houston, Texas, there is an entire section devoted to the city's the award-winning restaurants. "We don't mean to brag," it states, "but it's hard not to when our restaurants are constantly being recognized." At one point in time, USA Today declared the city "the dining-out capital of the United States," and local newspapers rave about how it has "a great restaurant scene."

While Houston's food culture is one delicious melting pot of cuisine — mainly barbecue, Tex-Mex, Creole and Vietnamese but with dozens of other international cuisines as well — it also lays claim to another food achievement: the most fast food restaurants in America.

In the United States, the biggest burger chains are McDonald's ($MCD), Wendy's ($WEN), and Burger King ($QSR), which is in the same family as Popeyes Louisiana Kitchen. As we covered before, the fast food pizza war is between Domino’s ($DPZ), Papa John’s ($PZZA), and Pizza Hut ($YUM), which is a part of the Yum! Brands empire next to Taco Bell and Kentucky Fried Chicken.

Between all of these brands are 55,987 fast food restaurants across the United States. Although these national chains span coast-to-coast, the city of Houston is where every one of these brands have the most locations.

Take McDonald's, the brand with the most locations out of these brands with 13,965 total restaurants. Going along with that national trend, it has 138 individual locations in Houston, the most out of any other fast food restaurant on the list.

When comparing all of McDonald's locations by city, the data shows that McDonald's has 29 more locations in Houston than its second-ranked city of Chicago, Illinois, and 55 more about 200 miles west of Space City in San Antonio.

This trend is the exact same for the other eight restaurants; although their second-most common city differs, the other chains all have their largest American foothold in Texas' most populated city. Even against Chicago, San Antonio, and Las Vegas, the next three cities with the most fast food restaurants, Houston's 558 total locations across the nine brands trumps all of those cities individually by at least 200 restaurants.

Because of its population and size, Houston does not have the most restaurants per capita — Orlando, Florida and Las Vegas, Nevada are laying claim to that title — but in terms of sheer location count, H-town has everywhere else in America beat. 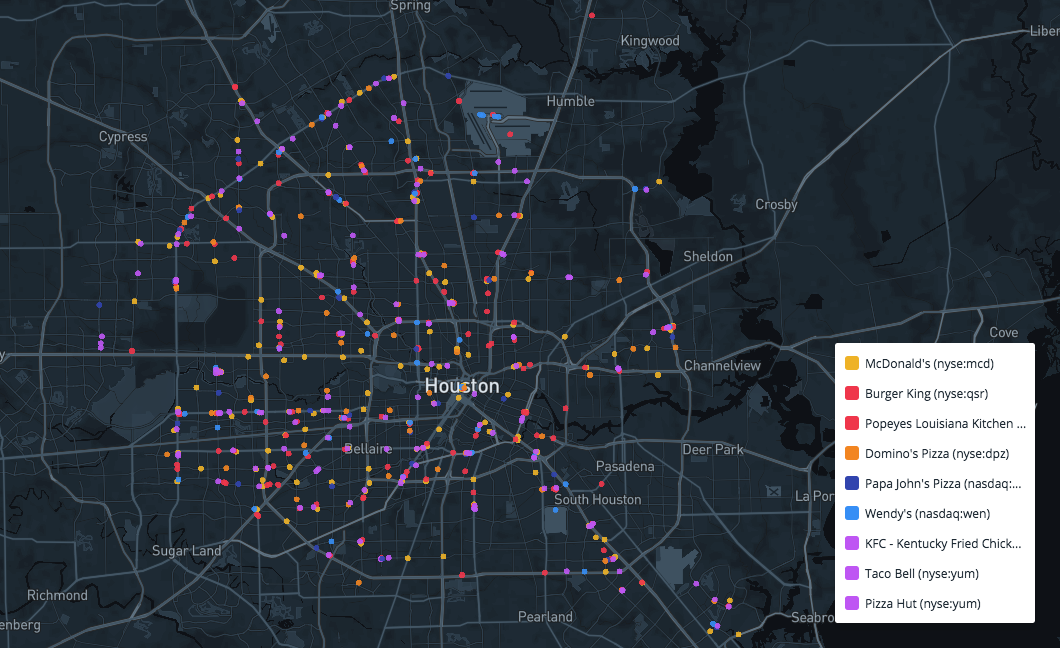