The ambitious, bold and hungry start their week with The Business of Business!
Tech
9.1.20   2:00 PM Tech

A look inside Houseparty: Can this app's Gen Z-friendly features rival Zoom?

You can switch up those Zoom happy hours with this video-chatting app, but will it become a staple in your keep-in-touch routine?

You just logged out of your team’s virtual happy hour after sitting through five? maybe it was six hours of Zoom meetings for your day job. Now, the night shift: your parents want to Skype (if they can figure out how to download the app) and your friends from college want to catch up over FaceTime, but screen time is getting a little old. Keeping in touch feels like a second job in and of itself.

Cue: Houseparty, an app where social networking meets video chatting with a Gen-Z flair that makes the whole on-camera-24/7 thing a little more fun. But don’t worry, you can still use it even if you were born before 1996. Launched in 2016 by Life on Air Inc., Houseparty had a tough act to follow. Life on Air, which was acquired by Epic Games in June 2019, had launched its breakthrough app Meerkat just a year earlier in 2015. Meerkat popularized livestreaming and is said to have laid the groundwork for the broadcasting features we’re used to seeing on Facebook Live, Instagram, and Twitter’s Periscope.

After attracting millions of users and millions of dollars in funding ($12 million to be exact), Meerkat founder and former CEO Ben Rubin decided it was time to pivot away from his public broadcasting platform lauded at South By Southwest and build the private video chatting app, Houseparty. Considering Rubin had recently closed a successful round of funding for Meerkat and was about to shift directions entirely, he expected to receive some criticism. Rubin and team went as far as releasing Houseparty under a different name to avoid backlash, only to be exposed in a report by Recode. Not a great look. Despite a somewhat rocky start involving layoffs and scaling problems, Houseparty took off.

Now, in the era of COVID-19, Houseparty has seen a sudden and steady surge in popularity, most notably in New Zealand. A Newshub report shows the app sitting at an unimpressive #1143 overall in the New Zealand App Store on March 17, 2020. A mere six days later, it was resting comfortably at #1. A comparable spike in downloads was seen across the globe, from the US and UK to France, Spain, and other European countries. Rewind to December 2019, and the company claims they had around 10 million users. Fast forward to March 2020, their user base exploded to 200 million according to company data.

And for the most part, Houseparty is still going strong. Despite accusations that the app compromised users’ Netflix, Paypal, and Spotify accounts earlier this year (Houseparty denies these claims), the app is ranked #18 in social networking in the US App Store as of August 26, 2020, with an average rating of 4.9 stars out of five from over 500,000 reviews.

Houseparty tries to mimic the structure of an actual house party by, well, not having very much structure. Download for desktop or mobile, and soon as you open the app, your front facing camera turns on, whether you’re ready or not. Your friends will then be notified that you’re “in the house.” Up to eight people can join at a time, and users can “have infinite rooms” and navigate between them, according to the Houseparty website. Press the plus button in the upper right corner to add friends by their phone numbers or usernames. Then, tap the hand icon, or as Houseparty says, “wave to your friends” to invite them to chat. You can even be connected with friends of friends — that’s one way to stay social while social distancing, if you’re into chatting with strangers that is.

If you’re looking for more casual, less scheduled social interaction, Houseparty might be for you — but the spontaneous nature of the app could be a double-edged sword. You can open the app when it’s convenient for you, and your friends will receive a push notification letting them know you’re “in the house.” Then, you can see who else joins for an impromptu catch-up. If you’re looking to keep the group small, you can lock the room and prevent others from joining the conversation. But spur-of-the-moment socialization isn’t for everyone, and random notifications throughout the day (or night) might be distracting, or in some cases, downright annoying. You probably wouldn’t show up to your friend’s house unannounced, so why start the party without prior warning?

While you’re waiting for the fun to start, Houseparty delivers some interesting factoids on the home screen that will either leave you chuckling or scratching your head. 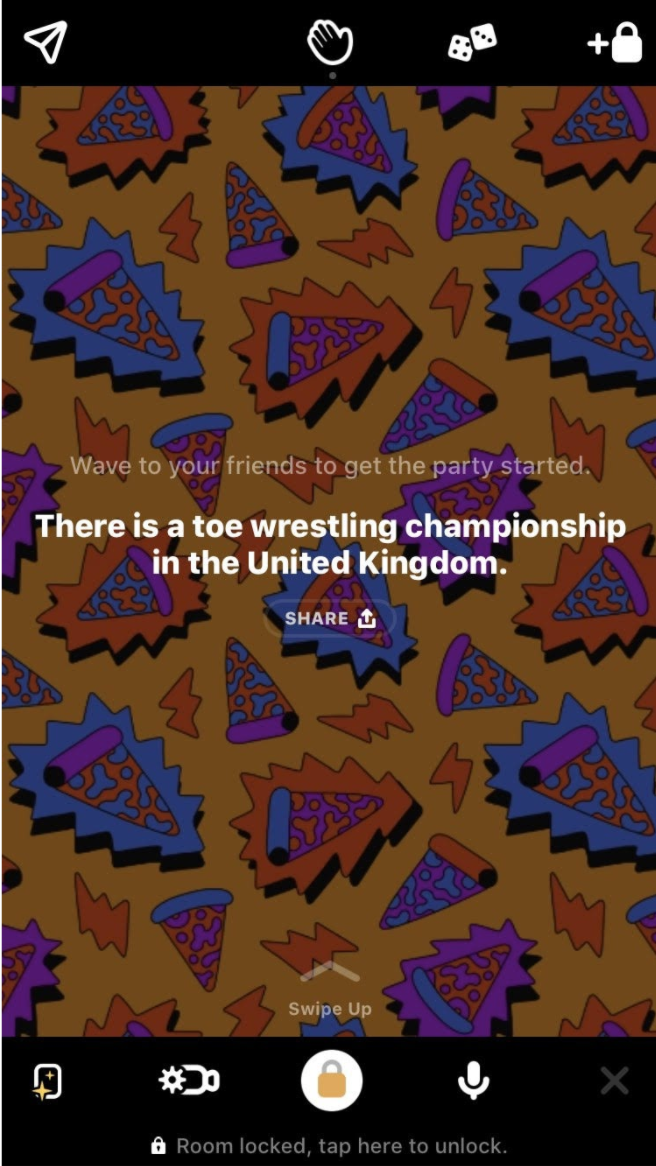 Just as Zoom backgrounds help you hide your messy home office, Houseparty offers “frames” that will disguise your bland backdrop. You can choose from colorful illustrations featuring slices of pizza, asteroids, or jack-o-lanterns if you’re already in the Halloween spirit. Unlike Zoom, however, you can not upload your own Houseparty background, and must choose from the 11 options provided on the app. There’s some room for customization in future iterations, and perhaps a few options that don’t leave you feeling like a cartoon character. 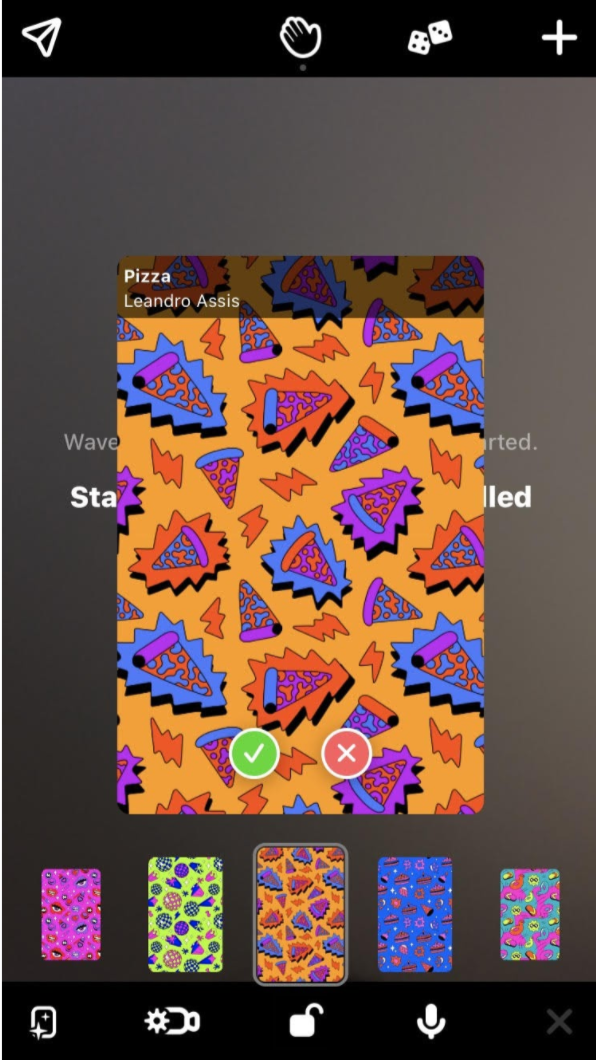 If your virtual happy hours are getting a little boring, you’re in luck. Houseparty has built-in games that offer some reprieve from redundant conversation, or a dose of friendly competition. Choose from games like UNO, Quick Draw!, and trivia on everything from movie villains to classic slogans. The downsides? The games cater to a younger audience and some options like Chips and Guac require at least three people to play. 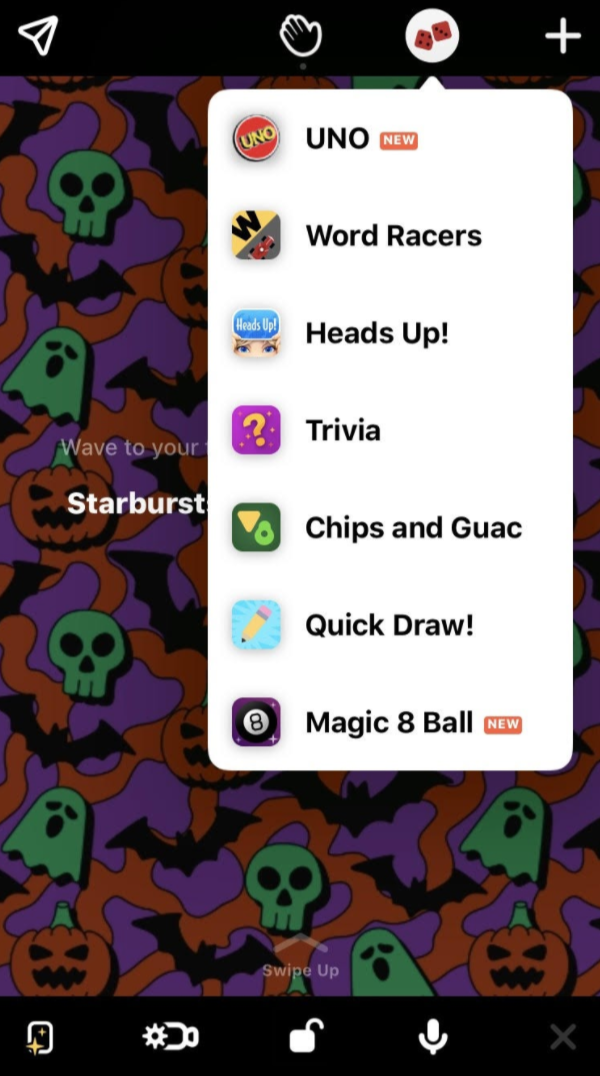 And for friends who can’t join the party, there’s Facemail — a feature that allows you to send a short video to someone who couldn’t make the chat. Simply click on the hand icon at the top of your screen and tap on a friend’s name. In the lower right corner, there should be an option to record and send Facemail. Bye, FOMO.

Like TikTok, Houseparty is often labeled as an app for teens. “If you’re older than 25, Houseparty might not be for you. An app that requires me to shoot video of myself is not something I’m going to do much of during the work week,” Casey Newton wrote for The Verge back in 2016. Think again, Casey. Now, many of us are on camera for tens of hours every week, oftentimes before, during, and after work. Houseparty could be a way to spice up those conversations, if you don’t mind a more juvenile interface.

“Sometimes I say, Zoom by day, Houseparty by night,” Houseparty CEO, Sima Sistani, told CNBC in April. And Sistani’s right; though we might not feel as professional or grown-up opening the Houseparty app as we do logging into a Zoom call, that’s kind of the point. Houseparty certainly won’t replace Zoom, FaceTime, or even Skype, but could be used as a supplement for a change of (virtual) scenery.

Plus, Houseparty offers features your family or friend group will appreciate. Whether the games excite your younger cousins or your friends enjoy the come-and-go nature of the conversations, there’s something for (almost) everyone. You might not want to invite your grandparents to use Houseparty, as they’ll likely find the features and lingo a little confusing (You want me to wave to you? We’re thousands of miles apart!), but overall, it’s worth a try. And at the very least, a little variety in our keep-in-touch routines won’t hurt.