The ambitious, bold and hungry start their week with The Business of Business!
Features
8.24.20   3:30 PM Features

A brief history of Casper: From $100,000 in debt to billion-dollar valuation

It wasn’t all that long ago that mattresses were sold in sparse brick and mortar stores, until a few entrepreneurs decided that the mattress industry needed disruption and the mattress-in-a-box phenomenon was born. All of a sudden, you couldn’t turn on the TV, launch a web browser, or drive down the street without seeing ads for these new companies—Casper, Leesa, and Purple popped up. Mattresses were among the last goods to make the transition to e-commerce. Traditionally, mom and pop stores and chains like Mattress Firm and Sit and Sleep were the place to go for mattresses. Casper started the mattress-in-a-box trend when it launched in 2014.

When Casper burst on to the scene, it had a few advantages. The world was not far from the global financial crisis, so for people weren’t buying mattresses. Years later, the world was sleeping on old mattresses, and the industry thrived. The second advantage Casper had was that consumers, particularly young adults, were more than ready to turn to the internet and apps to buy everything, including mattresses.

The power of influence 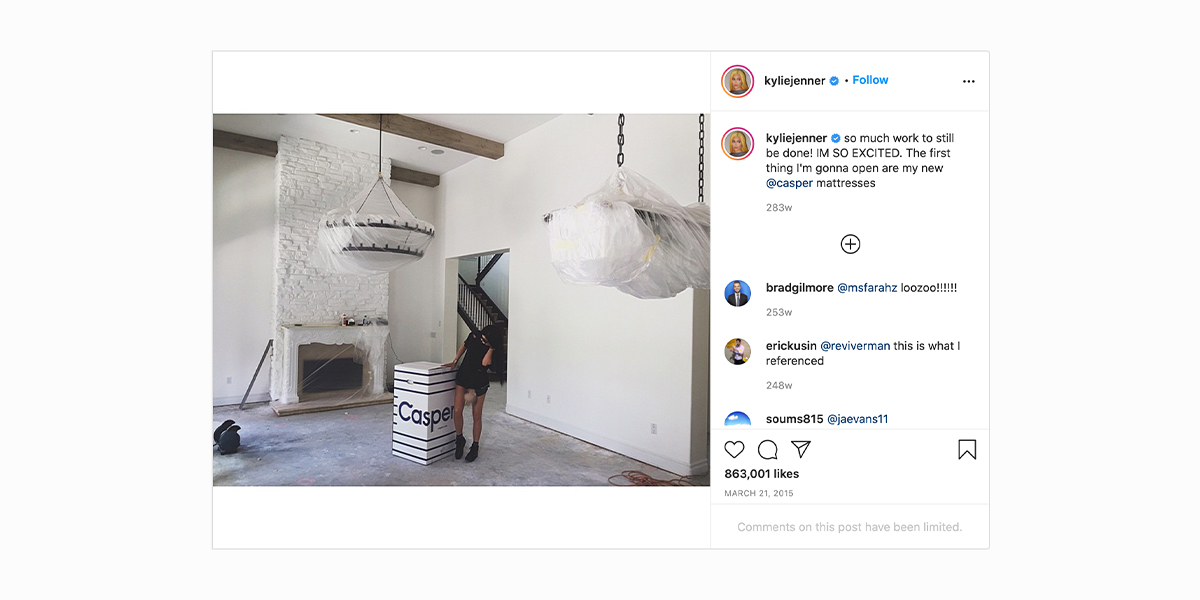 In March 2015, Kylie Jenner took to her Instagram to show off pictures of her new Casper mattress. That post got nearly 900,000 likes and practically broke Casper’s website with the demand. While that was exciting for Casper’s five co-founders, it didn’t minimize the hard work that went into trying to convince investors to sink money into an online mattress startup. VC after VC told Casper’s founders — Philip Krim, Neil Parikh, Luke Sherwin, Jeff Chapin, and Gabriel Flateman — that no one would ever buy a mattress online. But Casper’s founders believed otherwise. They were solidly convinced that the time was right to upend the nearly $40 billion global mattress industry and deliver mattresses in a three-and-a-half-foot tall box.

Casper’s founders put up their own money—once they maxed out their credit cards with $50,000 to $100,000 of debt. Eventually, the Casper founders won over one venture capital firm who gave the fledgling company $1.85 million in funding to get the company off the ground in January 2014. Within the first day the Casper website was live, it sold out its entire inventory, which was just 40 mattresses. The founders scrambled to get those early orders out. The first shipment arrived on a truck and the five founders repackaged them right there in the street in Manhattan.

Casper’s founders expected to sell about $1.8 million of its mattress-in-a-box in the first year. It turns out though, they sold that much in just two months.  That out of the box (see what we did there) success attracted investments from high profile people including Nas, 50 Cent, Ashton Kutcher, Tobey Maguire, Adam Levine, Scooter Braun, and Leonardo DiCaprio. 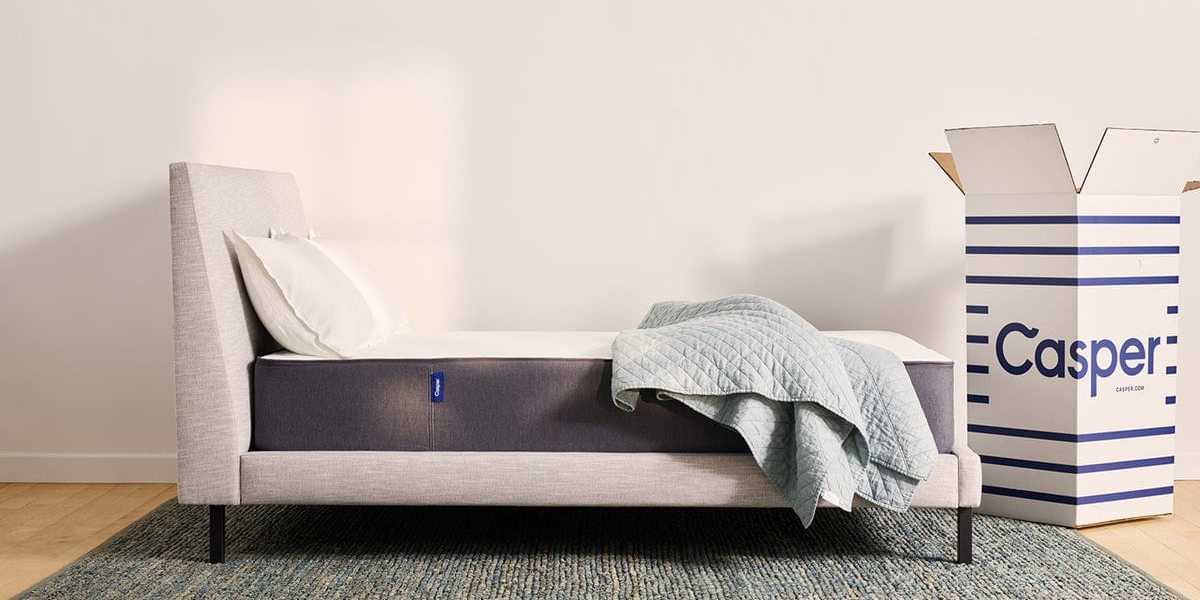 In 2017, Target came calling and wanted to acquire Casper for $1 billion. Instead, the retail giant invested $75 million in the company and started carrying Casper mattresses and other products in its stores. That same year, the company partnered with American Airlines to design a range of sleep products including pillows and blankets for their flights.

In 2018, Casper had more than $400 million in revenue and opened an office in Toronto as well as Canadian manufacturing facilities. In 2019, the company brought in $100 million in funding. The company is currently valued at $1.1 billion. In early January 2020, Casper Sleep filed its S-1 with the SEC. The company went public on February 6, 2020 at $12 a share. As of this writing, shares are trading at $8.48.

Casper brought in $1 million in sales in its first 28 days in business. In doing so, the company solved a long list of expensive logistics that naturally go with shipping something as large and bulky as a mattress. Naturally, a slew of entrepreneurs saw an opportunity to grab a share of the multi-billion mattress industry. These new brands appeal to millennials, the same group that’s driving the rise of online shopping.

The rise of Casper and other online mattress companies caused Mattress Firm, the largest mattress retailer in the U.S. to file for bankruptcy in October 2018.  Online retailers like Leesa and Purple are competing for Casper’s business. Other large retailers have gotten into the online only mattress selling business including Walmart and its brand Allswell, and Amazon’s AmazonBasics line. Amazon also sells Casper products on its site. 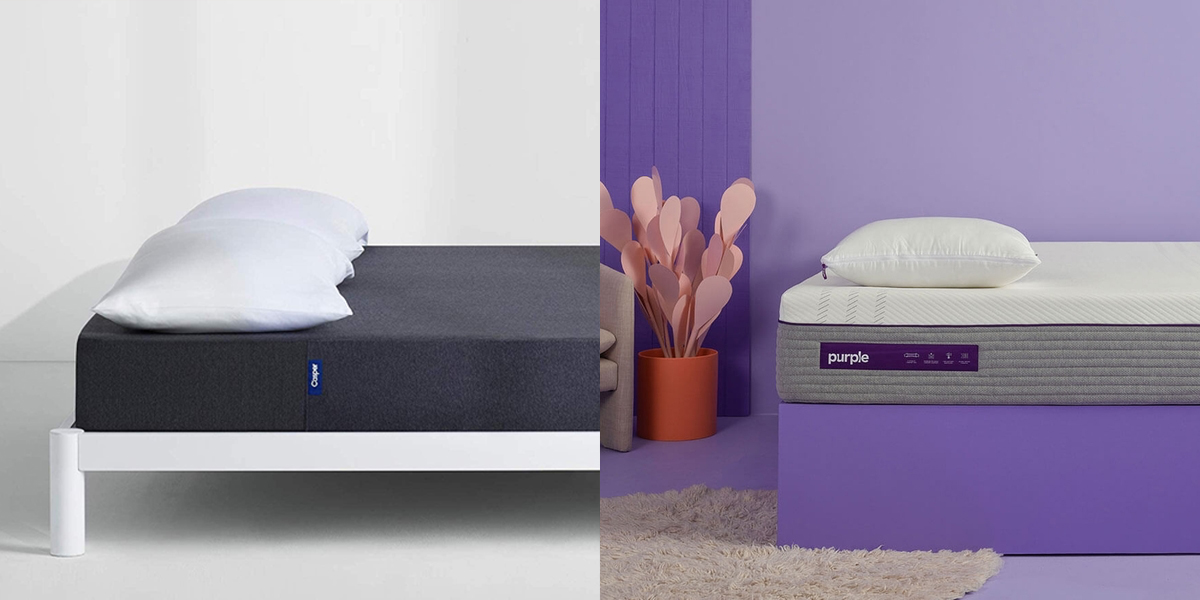 There are a lot of companies who have copied Casper’s business model, chief among them is Purple. Casper recently went public, whereas Purple has been public for a number of years. Casper entered the mattress-in-a-box industry in 2014, and Purple followed in 2015 with a mattress that they claim soothes, rather than hurts your joints. Purple is run by brothers Tony and Terry Pearce out of Lehi, Utah. They created FLOAM in the mid 1990s, a stretchy material that has been used in everything from Nike running shoes to hospital beds, and a key feature of their Purple Mattress.

A King Sized Purple Mattress with run you a minimum of about $1,500. A King Sized Casper Mattress can be yours for $1,300 for the original all foam version, a hybrid version will set you back $1,500. So, price-wise, Purple and Casper are similar. Casper mattresses use polyfoam and memory foam, while Purple mattresses use the proprietary hyper-elastic polymer, or FLOAM that the Pearce brothers invented.

A look at both brands' data reveals their comparable popularity on Facebook, although Casper's likes are starting to plateau.

Both mattress companies are hiring. But in April 2020, Casper laid off 21% of its staff when it closed its European offices amid declining revenues related to the COVID-19 pandemic.

And, unfortunately for Casper, the average rating for its mattress is in decline.

Casper isn’t sitting back and counting its dollars, its innovating to stay ahead of the competition with a range of new products including pillows, sheets, dog beds, and lamps. The company is also opening more physical mattress stores—up to 200 across the US. Hopefully they can stay open in a post-COVID world.