The ambitious, bold and hungry start their week with The Business of Business!
Innovation
7.30.18   1:53 PM Innovation

In June, SpaceX listed jobs with "BFR" in their titles for the first time. Here are those positions and what they could mean.

SpaceX's ($PRIVATE:SPACEX) BFR team, the team building the highly anticipated reusable launch vehicle and spacecraft that promises to one day take us to Mars, has some open positions. Two, to be exact.

And if you're a rocket scientist, you may want to get your resume ready. That's because as of just last month, SpaceX is listing jobs with the term "BFR" in their titles for the first time.

Beginning on June 12, 2018, SpaceX listed an open position for "BFR Build Engineer" in what just might be the coolest job listing we've ever come across. It is described as such:

The BFR (Big Falcon Rocket) is a massive next generation launch vehicle and spacecraft designed to carry mankind to the moon, Mars, and beyond. Also capable of flying humans from Los Angeles to New York in 25 minutes, the BFR will eventually replace the current Falcon 9, Falcon Heavy, and Dragon programs as the primary vehicle for all SpaceX missions. Working directly in the Vehicle Engineering group, the goal of this team is to investigate, test, and develop new hardware, software, and automation efforts capable of supporting advanced metallic and composite joining methods for the BFR. The team works directly with design and analysis engineers in delivering the development and selection of technologies, specifications and methods needed to manufacture critical structures. Focusing on friction stir welding, EB welding and composite tank lamination, the BFR Build Engineer is responsible for delivering results on critical projects with a highly demanding and fast-paced schedule. 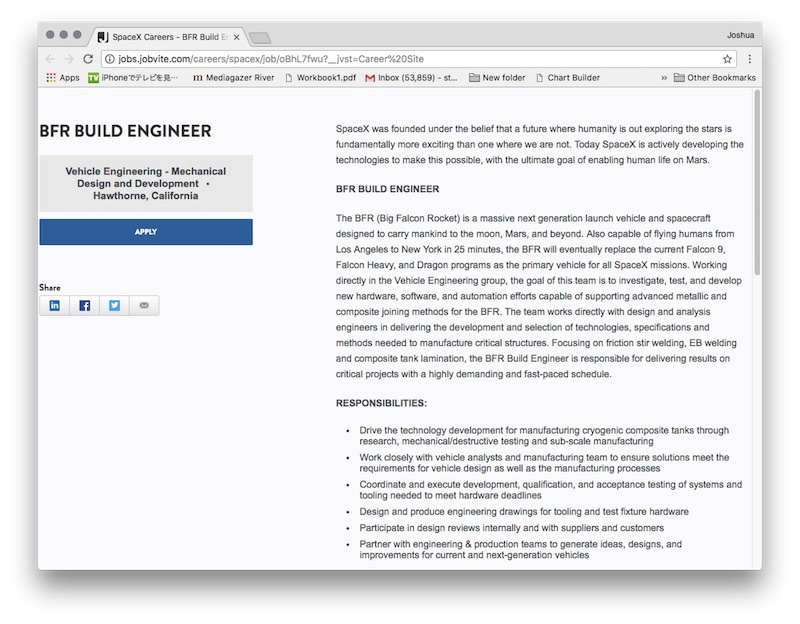 When it comes to responsibilities, the BFR Build Engineer will "drive the technology development for manufacturing cryogenic composite tanks through research, mechanical/destructive testing and sub-scale manufacturing". In other words, it appears this person will be part of a think tank that will literally come up with ideas, try them out, blow them up, and try again (apologies for the rote description - we're not rocket scientists here).

As of today, the BFR Build Engineer position is still listed, so it's not clear if SpaceX has hired someone for the job or is simply leaving the position open for more applicants.

But the BFR hiring at SpaceX didn't end there. On July 4, 2018, SpaceX added another position called "BFR Mechanical Design Engineer". Unlike the BFR Build Engineer position, the BFR Mechanical Engineer position appears to be more of a leadership positions that asks for "full ownership" of the project at hand, lead design reviews, and "design and ownership of test setups". 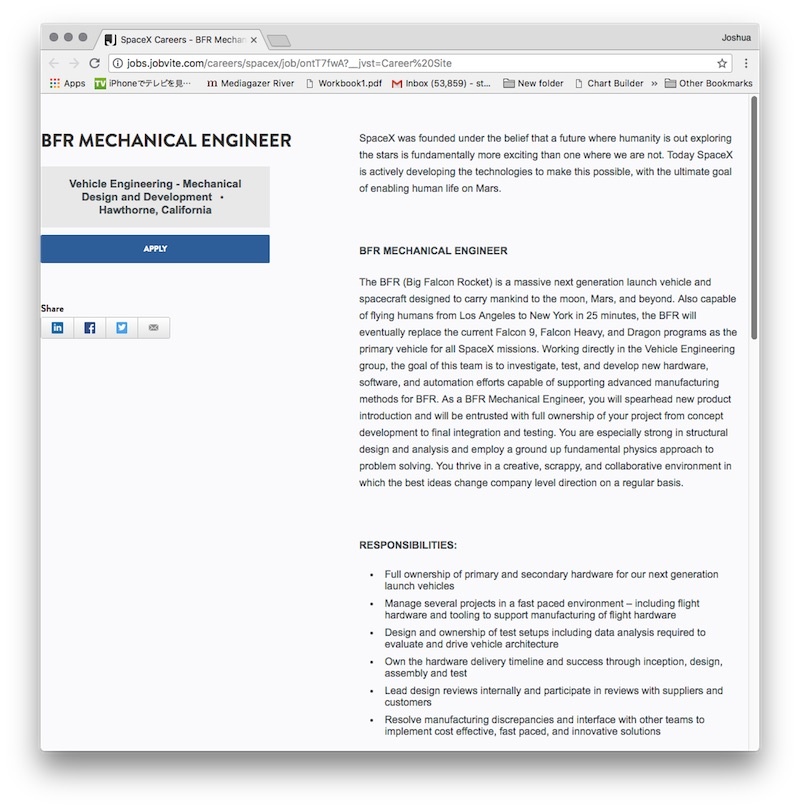 As of today, it appears both positions are still open. The jobs' appearance on SpaceX's public-facing career site is telling in that it's clear the private company is investing in talent for the BFR. In short, this is a sign that big things are on the way.

Overall, hiring at SpaceX has been down since the beginning of June 2018.

While hiring may have slowed, it looks as though the company is hard at work making good on promises to launch broadband satellite networks and now, in this case, the BFR. In other words, we could be looking at a private space company that has the base workforce it needs and is now hiring specialists in leadership positions to get them to the next level.