Here's how much the crypto world loves Discord more than Telegram

Discord started out as a platform for gamers. Our data shows that it now hosts the biggest and most active crypto communities, giving it profound influence in the crypto space.

A funny thing happens when people start talking about crypto — sooner or later someone usually mentions Discord. The remark might be a reference to a conversation that happened on Discord, or an invite to a Discord channel, or maybe something about a crypto community that sprung up literally overnight through Discord chatter.

Whatever is going on in crypto-land, it seems like Discord, a digital communication platform, is essential to the process. But in an era where there is no shortage of apps for chatting by text, voice or video, or sending data, one might wonder how exactly this app in particular became the gold standard for cryptocurrency enthusiasts.

It turns out that's the app's popularity with crypto communities runs even deeper than you might think. We discovered that by taking a look at DAOs, or decentralized autonomous organizations. Operating via smart contracts on blockchains, these collectives pool resources from members in the form of crypto tokens for use in specified purposes (such as attempting to buy a rare first-edition of the U.S. Constitution).

At The Business of Business, we’ve been doing some in-depth analysis of DAOs, including by examining some of the largest DAOs and their backers, and determining factors that may indicate future success. Using that data, we were also able to quantify the closeness of the association between crypto and Discord and show why the platform is a go-to for coordinating big projects.

In the crypto market, three digital platforms host most communications: Discord, Twitter, and Telegram. Twitter is used for major announcements, hyping coins and spreading news about the space. But for communicating and collaborating, crypto enthusiasts tend to rely on either Discord or Telegram.

Telegram, launched by Russian-born brothers Pavel and Nikolai Durov in 2013, has advantages such as end-to-end encryption and ease of use over mobile devices. Founded in 2015 by Jason Citron and Stan Vishnevskiy, Discord was initially built for gamers, and was intended to encourage "talking," help "form memories" and recreate "the feeling of togetherness all found through gaming." Working better in desktop mode, its discussion forums are organized into topic-based channels.

Discord is used by "everyone from local hiking clubs, to art communities, to study groups," according to its website. Based on our research, it's also the clear winner hosting the strongest, most vibrant DAOs. This is true even though Telegram is much larger, with 550 million monthly users to Discord's 150 million monthly users.

How did we learn this? We created a ranking system for DAOs, our net community score index. In doing so, we found a strong pattern. Discord tends to host DAOs with larger registered memberships, more active participation rates, and larger market caps. The charts below show what we found. 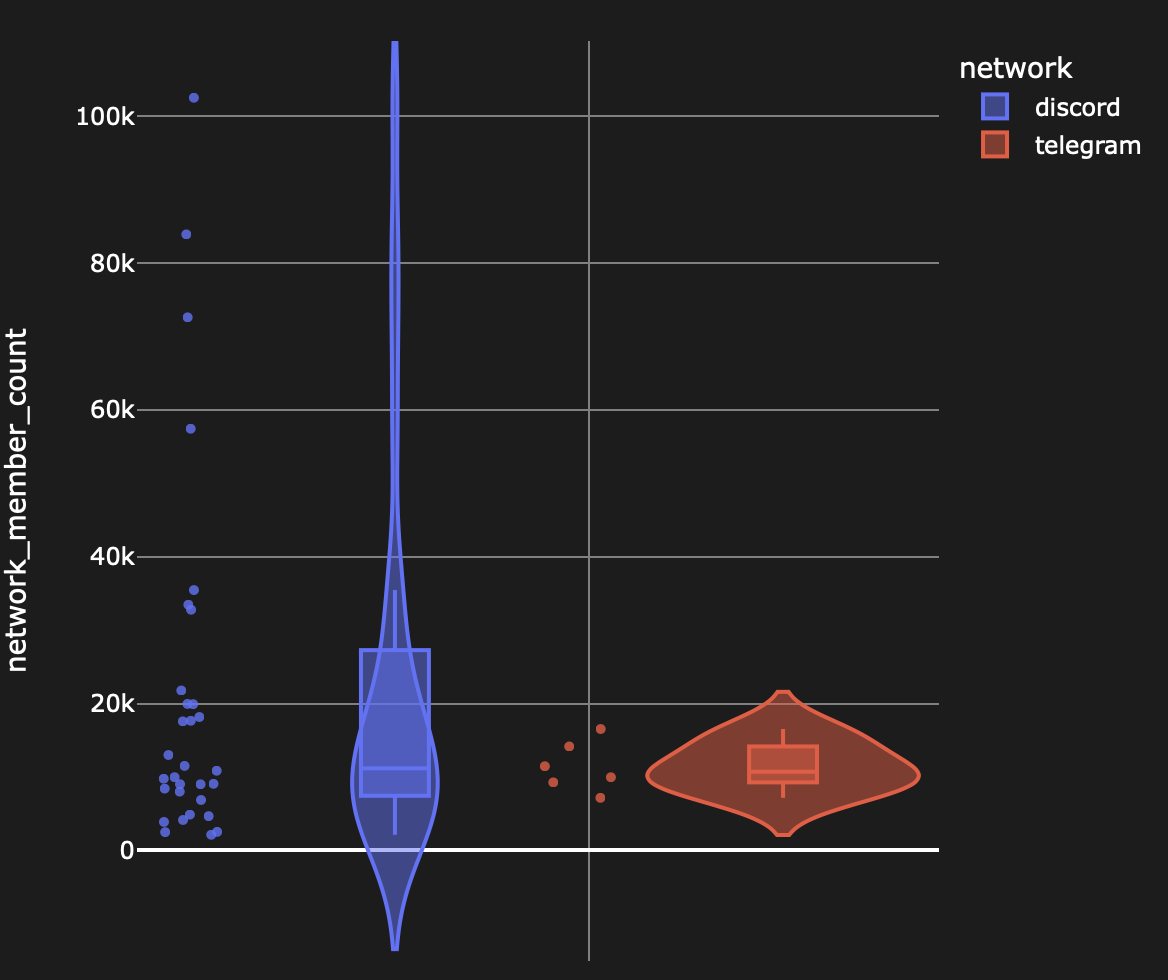 Above you can see the registered membership sizes for Discord and Telegram-based DAOs. The column scatter plots (with the points) reveal how large DAO memberships are along the y-axis. The frequency distributions (violin-shaped here) present a corpulent “belly” showing the membership counts most DAOs cluster around.

What really sets the two digital hubs apart though is popularity with larger DAOs. As you can see on the chart, Discord boasts many DAOs with membership counts over 50,000, such as Rarible, Uniswap, SuperRare, and SushiSwap. It also hosts decentralized gaming DAO Illuvium, although it is not pictured on the chart because its membership size of 232,973 is an outlier.

Discord also plays host to a wider range in sizes of DAOs than Telegram. The standard deviation, showing how far apart data points are, is 44,041 on Discord. It is 3,121 for DAOs on Telegram.

A note on methodology: Earlier, when we compiled our net community score index, we looked at 38 of the biggest DAOs by market cap. (We started with 50, but left out those whose governance was either private or net distributed, or those for which we could not find public data.) While not a huge sample size, the group is fairly representative of the most financially successful DAOs.

The preference for Discord was clear: 6 DAOs in our sample are primarily based on Telegram, while the other 32 mainly communicate on Discord. For DAOs that are on both Discord and Telegram, we counted them as one or the other based on where they had the largest registered membership.

The data we collected further shows that Discord-based DAO communities aren’t just bigger, they’re also more active. Below you can see the ratio of active vs. registered members in DAOs that congregate on Discord and those on Telegram. The boxes show summary statistics while the circles distribute the points along activity rates on the x-axis.

Overall, the picture seems pretty clear. What is most striking about the chart above is that the interquartile ranges are not even overlapping. That means three-quarters of DAOs on Discord have an active membership rate of more than 12 percent, while only a quarter of DAOs on Telegram can say the same.

For reference, the bubble sizes in the chart represent market cap, so you can gauge how successful the DAOs are across activity rates. For instance, the DAO on Telegram with the highest market cap, MakerDAO (biggest red dot in the chart above), had 8 percent of its registered members online when we collected this data.

Now, we admit it’s possible that our numbers are a little off because public data only allows us to see who is “online” on either platform (not who is engaging in a particular group chat or server). Some other issues might also affect results, such as the fact that at least some people are members of multiple DAOs, or that DAO members might use these platforms for non-DAO-related activities. But we think the impact of these factors on the results is negligible.

Below you can see how much market cap DAOs on either Discord or Telegram capture. The blue boxes represent DAOs on Discord and the red ones DAOs on Telegram. The tree map abstracts market cap as “real estate” to give us a sense how much of the DAO market each community platform secures.

Nearly all of the 15 largest DAOs we looked at rely on Discord. Only the third largest of the group, decentralized finance organization MakerDAO which totals $2.4 billion, is on Telegram. It’s represented by the box in the red strip with the greatest surface area. By our estimates, MakerDAO is the exception that proves the rule: Discord is where most of the crypto action happens.