The ambitious, bold and hungry start their week with The Business of Business!
Innovation
12.23.21   10:45 PM Innovation

Ranking DAOs: We computed their "net community score" to see how they stack up

Decentralized autonomous organizations are crypto-based collectives. We figured out how to rank them based on the strength of their communities.

We have to credit venture capitalist Chris Cantino for this idea. The Color Capital partner, who focuses on crypto, Web3 and consumer businesses, recently proposed the first approach for measuring the relative strength of DAOs — a “net community score.”

Decentralized autonomous organizations, crypto-based collectives with no central governing leadership, have emerged as a powerful force for raising capital. Yet it is difficult to assess their relative strengths as a potential member or investor.

This is where Cantino’s suggestion comes into play. His “net community score” idea is derived from the marketing concept “net promoter score.” If you’ve ever opened an email from a company’s customer service department asking “how likely on a scale of 1 to 10 are you to recommend this product or service to your friends,” then you have some familiarity with net promoter scores. The answer you give, averaged with others, will be the result.

Net promoter scores are considered a key indicator of a company’s future success, measuring not only customer loyalty but also whether your customers can help your business grow. In his analogy, Cantino suggested net promoter scores fit a Web2 world, where the internet economy is largely controlled by major corporations like Google and Facebook. Meanwhile, net community scores provide similar information for Web3, a decentralized future vision of the internet relying on blockchain.

It makes sense that the strength of a DAO’s community would be important to its future success, much like customer satisfaction is important to the future success of today’s businesses. But to our knowledge, no one has yet proposed a methodology to flesh out how a “net community score” could actually be computed. So we decided to give it a try ourselves. Here is what we came up with.

The starting point: DAOs and Web3

In Web3, sometimes dubbed the “ownership economy,” the community is king. And DAOs are a creature of that economy. While in Web2, the paradigm is for platforms to lock in their users and rely on network effects to dig a moat around themselves, Web3 makes it easy for users to opt out. The focus is on consent and ownership.

People who chose to invest in DAOs are paid with equity in the form of tokens. They can hold on to those tokens and participate in the project’s governance, as well as capture the upside if the DAO is successful. Theoretically, these stakes are liquid, allowing members to sell off some of their holdings if needed.

We scraped data readily available on the internet, including registered and active (online) members on Discord servers and Telegram chats, Twitter follower counts, and voter participation rates for DAOs. Of these four variables, we assigned more weight to measures of how active community engagement was and less to those that tracked these communities’ sizes.

We weighted the voter participation rate at 1.75x, the online member counts on Discord servers and Telegram group chats at 1.5x, the registered membership on these community platforms at 1x, and the Twitter follower count at 0.75x.

Our net community score is on a 5-point scale. For each variable, the data was standardized on a scale of zero to one (by dividing all data points by the highest value sampled for that variable). Since the voter participation rate is by nature a ratio between zero and one, it was left as is.

To calculate the voter participation rate, we took the voting statistics for the five latest governance proposals in each DAO, averaged vote counts as emitted by single addresses. Then, we divided the output by the number of eligible voters based on the governance rules and token holder counts put forth by block explorers.

At The Business of Business, we want you to be able to check our work and reproduce the research, if you choose. So we put every “input” value with its corresponding source on KgBase.

For this project, we looked at 50 of the largest DAOs by market cap as ranked by CoinMarketCap (defined as the product of circulating supply and token prices). Then, we excluded DAOs whose governance was either private, not yet distributed, or for which we could not find public data. Our final results include 38 DAOs.

Here are the DAOs with the highest net community scores 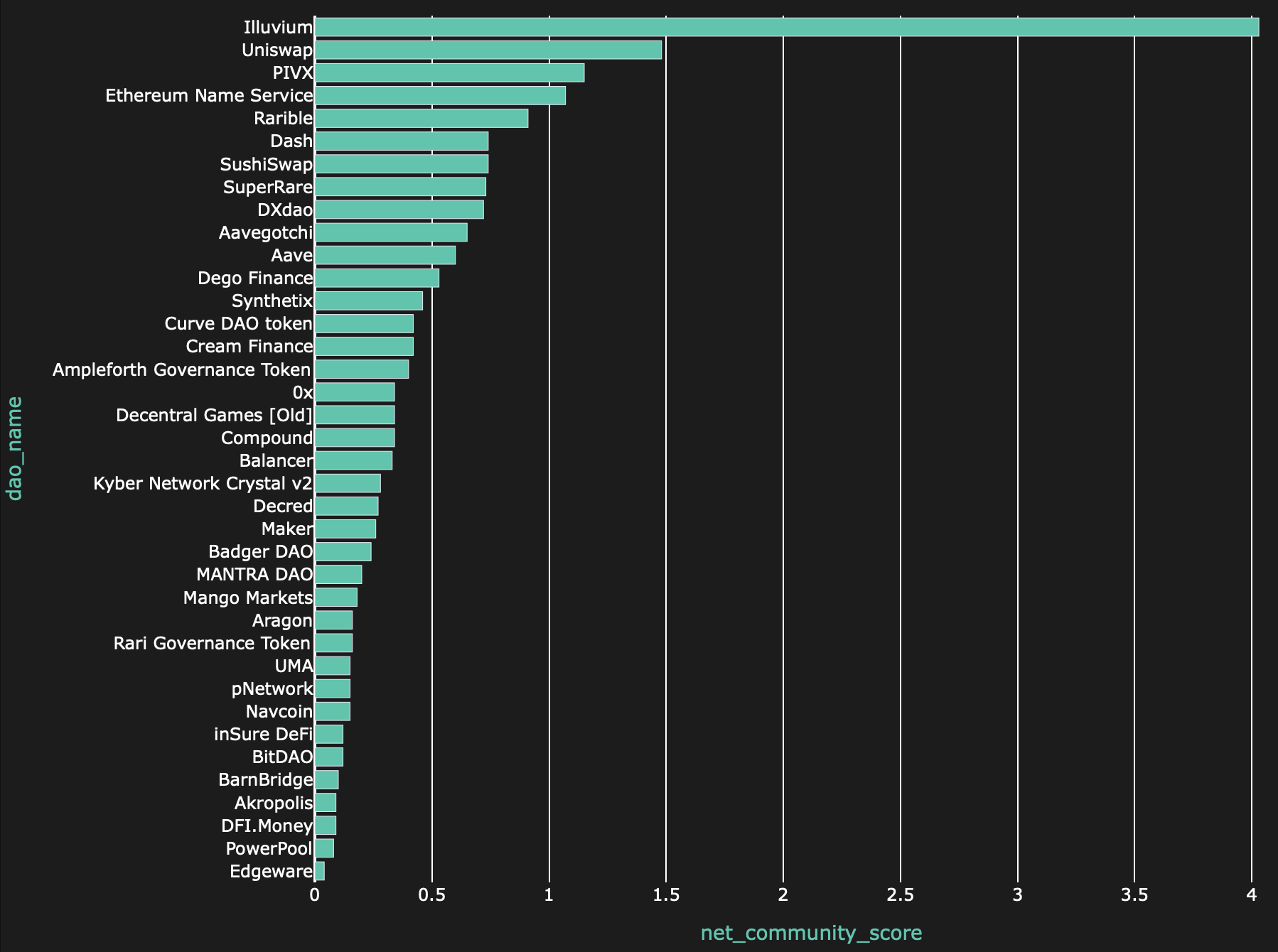 Illuvium has the highest net community score at 4.03 points out of 5. At a $715 million market cap, it is the tenth most highly valued DAO. It is also the DAO with the largest number of registered members on Discord with 233,000.

One of the reasons it also has such high voter engagement at 76% is that there is a council elected on a regular basis by ILV token holders to handle governance decisions. Accordingly, it is expected that the Illuvinati Council, as it is called in the DAO’s official documentation, would answer the call when prompted to vote in the play-to-earn DAO’s proposals. Play-to-earn is a gaming trend started by Axie Infinity, where tokenized games enable participants to earn crypto while playing.

Most of the DAOs we looked at are clustered within a range, but there were notable outliers — Illuvium and Uniswap.

Illuvium, appearing at the upper left hand corner, has an unusual voting system where an elected council votes on governance proposals, which largely helps put it in outlier territory.

Uniswap, shown in the right hand side, has a net community score of 1.48 and a market cap of $9.3 billion. The decentralized exchange has the second highest number of registered Discord members and a 757,600-strong Twitter followership. Contrastingly, with 344 active voters its number of active voters is below the 1,428 average, though it is above the median value which stands at 45 active voters.

Meanwhile, Decred, the green dot with a net community score of 0.27, has the most active voters of all in this study with an average of 28,748. It also has a market cap of just a little less than $1 billion. Relative to its eligible voters, it is the seventh best in voter engagement rate. Voting here requires a ticket that costs the hefty sum of DCR 197 (about $14,000). Per-ticket voting is unusual for DAOs. 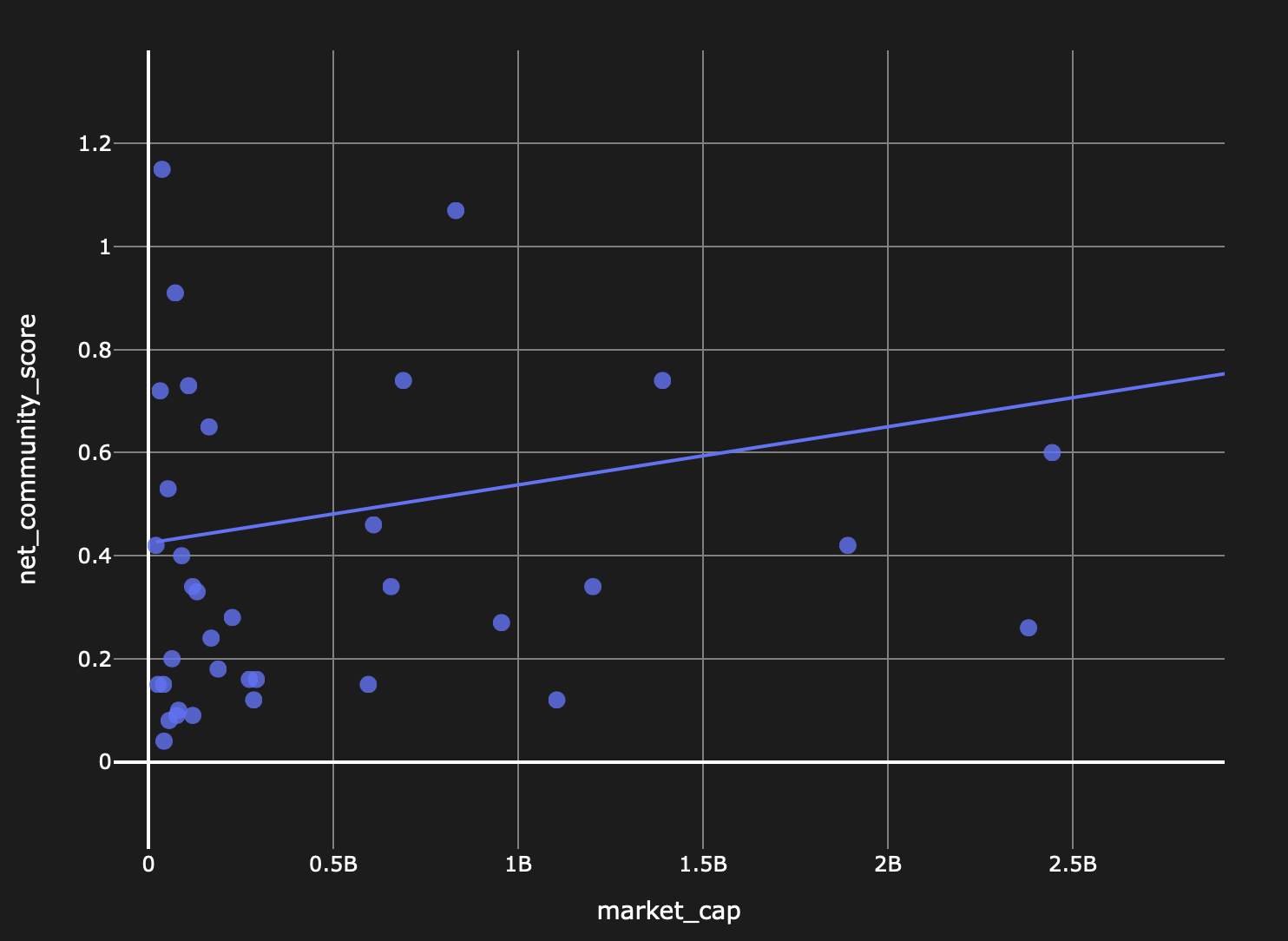 Zooming in on the scores that are not outliers, we can see more consistent trends. In particular, we can see there is a slight positive correlation between the market cap and the net community score. However, it does not appear to be statistically significant. (The correlation coefficient of 0.067 suggests a fairly weak relationship.)