The ambitious, bold and hungry start their week with The Business of Business!
Markets
6.4.19   5:08 PM Markets

More gaming is heading to mobile, instead of console. GameStop investors need to reverse a difficult trend to make shares bounce back.

GameStop ($GME) is set to report Q1 2019 earnings after the market's close on June 4, and analysts tracked by Zacks Investment Research have expectations the company will lose money, after it warned of a possible loss.

It has been a long ride down from the peak more than a decade ago, and over that time, GameStop stock lost nearly 90% of its value. According to our data, it faces the same trends that many brick-and-mortar retailers are facing — a declining retail footprint, hiring trends, and foot traffic — and it comes years after the eventual shift to mobile gaming and online markets predicted its downfall.

The best selling products at GameStop last month — much like the month before and in periods prior — were gift cards for online marketplaces, effectively making GameStop the equivalent of a currency exchange store.

GameStop hiring appears to be on the decline, according to our tracking of job postings from the company's website. That lines up with public records of its declining store count. Year-over-year, it operates about 100 fewer stores than it did over its prior fiscal year, according to federal filings.

Traffic May Have Peaked

We can track Facebook ($FB) Were Here Count, or how many check-ins and mobile device location shares brands have over time. After years of climbing, GameStop's Were Here Count has nearly stalled. To be fair, this figure may be influenced by its footprint reduction.

GameStop's web traffic is beginning to decline in 2019 as well, with our next chart - although this data set only carries into February. However, Gamestop.com web traffic remains strong around the holidays.

Why has GameStop struggled amid the growing videogame industry? It may be because the industry's shift towards online marketplaces, especially considering the increased role of mobile gaming on the overall market. 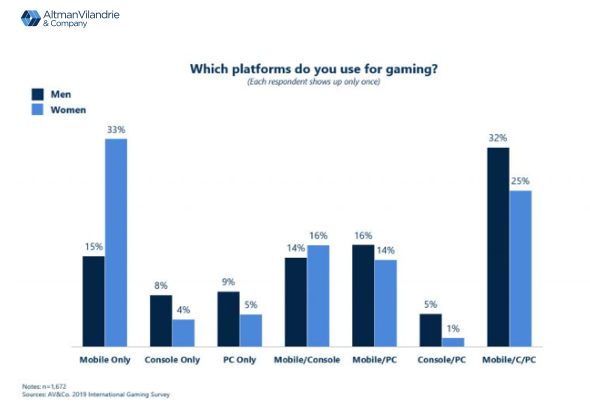 Companies that traditionally made console and computer games are embracing the new trend. In its Q1 2019 earnings call, Activision Blizzard ($ATVI) has one of its key focus areas for the future as an extension of "our acclaimed console and PC franchises to the largest and fastestgrowing gaming platform." Electronic Arts ($EA) is shifting the way it ships games to "soft launches," a common trend in the mobile market, which indicates a company-wide shift to more mobile-centric practices. Even Nintendo ($TYO:7974), a company notorious for wanting to keep its intellectual property on its own systems for decades, is reaping the rewards of Pokemon Go! on mobile devices.

That continued shift to mobile, which has its own on-system virtual marketplaces, could continue to hamper Gamestop, which is already facing the same issue for console and computer games: a shift to the virtual market.

The best selling products at GameStop last month — much like the month before and in periods prior — were gift cards for online marketplaces, effectively making GameStop the equivalent of a currency exchange store.

According to GameStop's Bestsellers — where products are assigned a number rank reletive to the number of units sold online — for the month of May, 17 out of the top-20 products are gift cards. The other three are pre-orders for titles not yet released.

In looking at the best-selling product for May, the $10 PlayStation Store Gift Card, it has held that spot, or a top-ranking spot in general since the summer of 2018.

Thinknum tracks companies using various metrics - job postings, social and web traffic, product sales and app ratings - to create data sets that measure factors like hiring, revenue and foot traffic. Data sets may not be fully comprehensive (they only account for what is available on the web), but they can be used to gauge performance factors like staffing and sales.

GameStop has made multiple deals to diversify its product line for the rising challenge presented by mobile gaming and online marketplaces such as Steam and the built-in services from Sony's ($SNE) PlayStation and Microsoft's ($MSFT) Xbox. But it's not clear whether it has built enough of a mobile presence to offset simply being a brick-and-mortar retailer in a world where a gamer can buy the exact same physical game on an online store.

And judging by the warning it gave investors, it may be time to blow in the proverbial cartridge and hope for a new start.