The ambitious, bold and hungry start their week with The Business of Business!
Innovation
9.5.18   6:21 PM Innovation

Delivery data: The world's largest delivery services and who they serve

Of course, these five major delivery companies are not equal in market share nor strategy. We looked at what, and where, these applications are delivering, and it turns out they are (literally) catering to very distinct groups of Americans.

Unsurprisingly, all five major food delivery companies are targeting areas that are well above the United States 2016 median household income level of $59,039. It makes sense as a business strategy, too: target areas where people have enough discretionary income for a $24 sushi combo.

While knowing their target audience is great on its own, looking directly at the meat and potatoes behind the numbers — mapping the locations of every restaurant that these services offer in the contiguous United States, in other words — gives a bit more flavor to these surging food delivery giants. 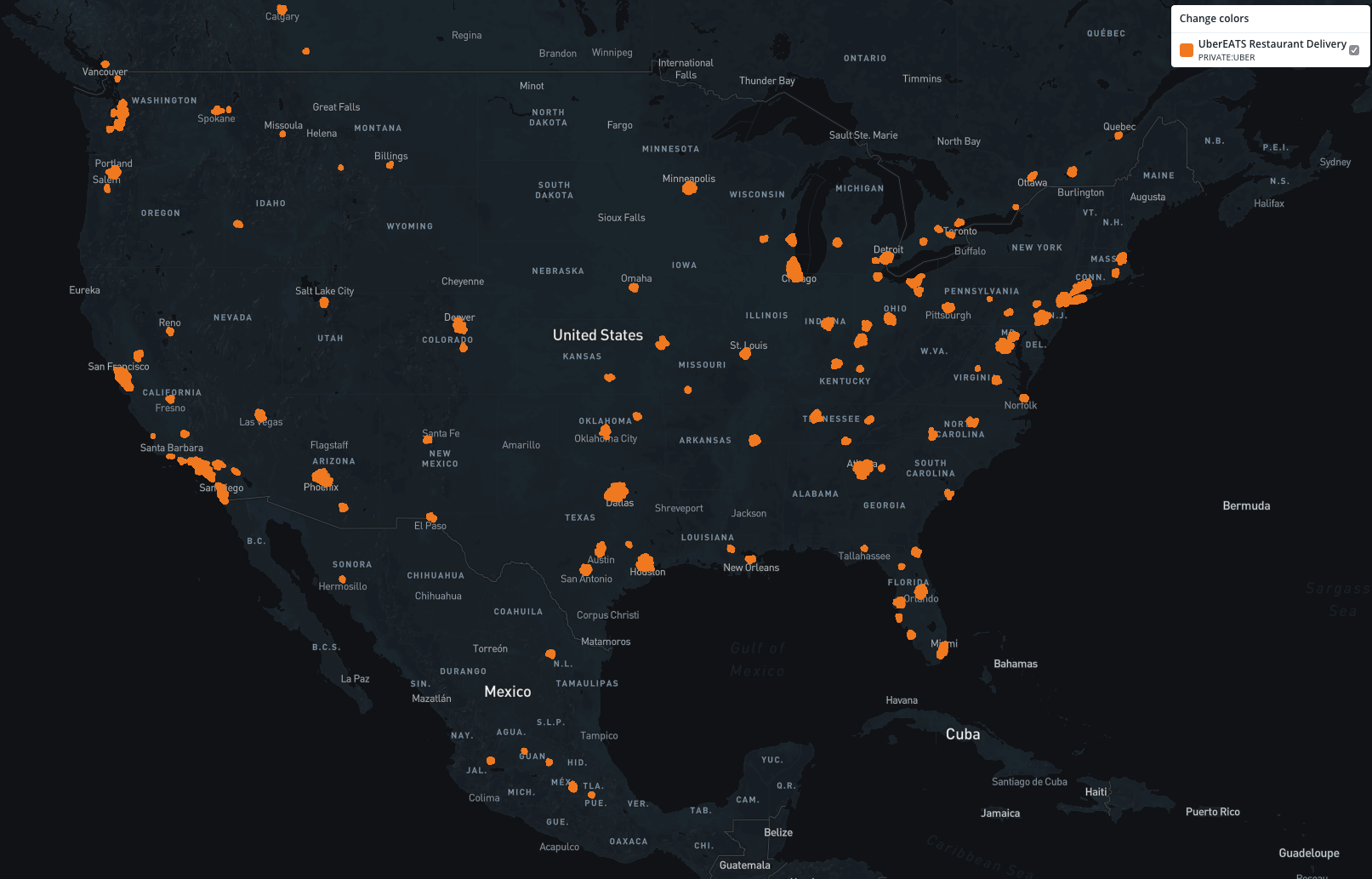 When looking at the footprint of Uber Eats, it is hard not to consider its parent organization Uber. In August 2014, Uber tested out UberFRESH, an app that delivered select lunches for $12 in Santa Monica, California. It was then rebranded as UberEATS and expanded beyond LA seven months later.

Today, the ridesharing company uses its fleet of drivers to not only deliver people to their destinations, but also food, as drivers can sign up to take orders. This practice allows it to be in locales that usually don't have major food delivery app coverage, such as Topeka, Kansas and Missoula, Montana.

It also boasts the largest market outside of America, servicing six continents and claiming a growing foothold in Europe. The latter is definitely something to explore for a later day, as we don't want to overstuff this analysis (but Thinknum subscribers can check out the data here).

Postmates as told by postal codes 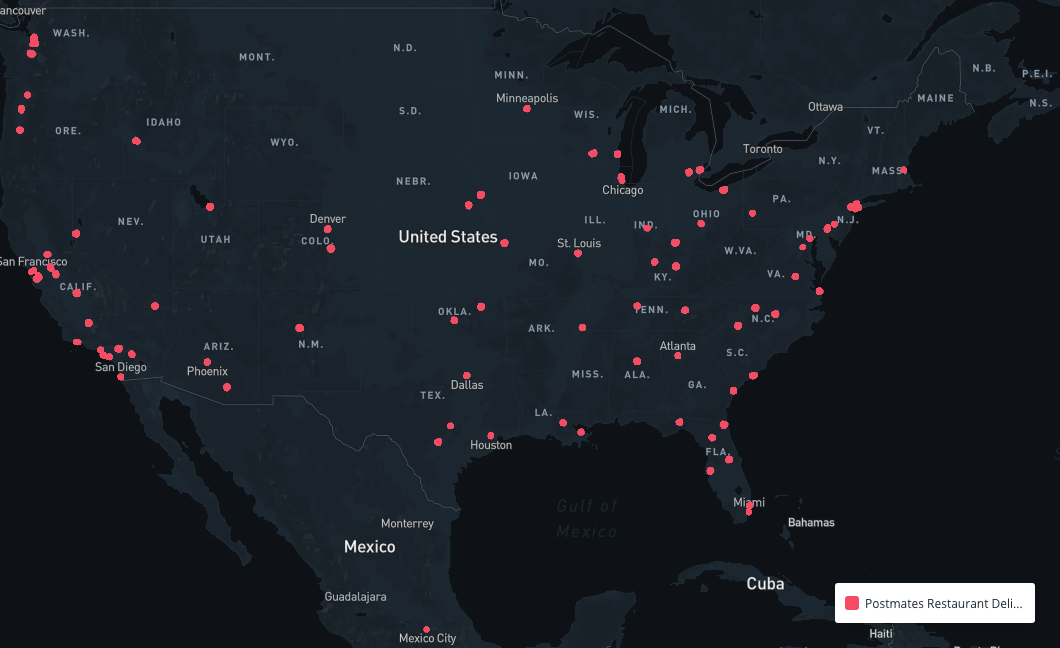 One of the earliest modern food delivery companies, San Francisco-based Postmates, was co-founded by Sam Street, Sean Plaice and Bastian Lehmann in 2011.

Although its reach isn't as grand as Uber Eats, it may be worth revisiting the platform as it just expanded to 100 cities as part of its largest growth ever. It also may continue to grow through its partnerships with Chipotle and Walmart. 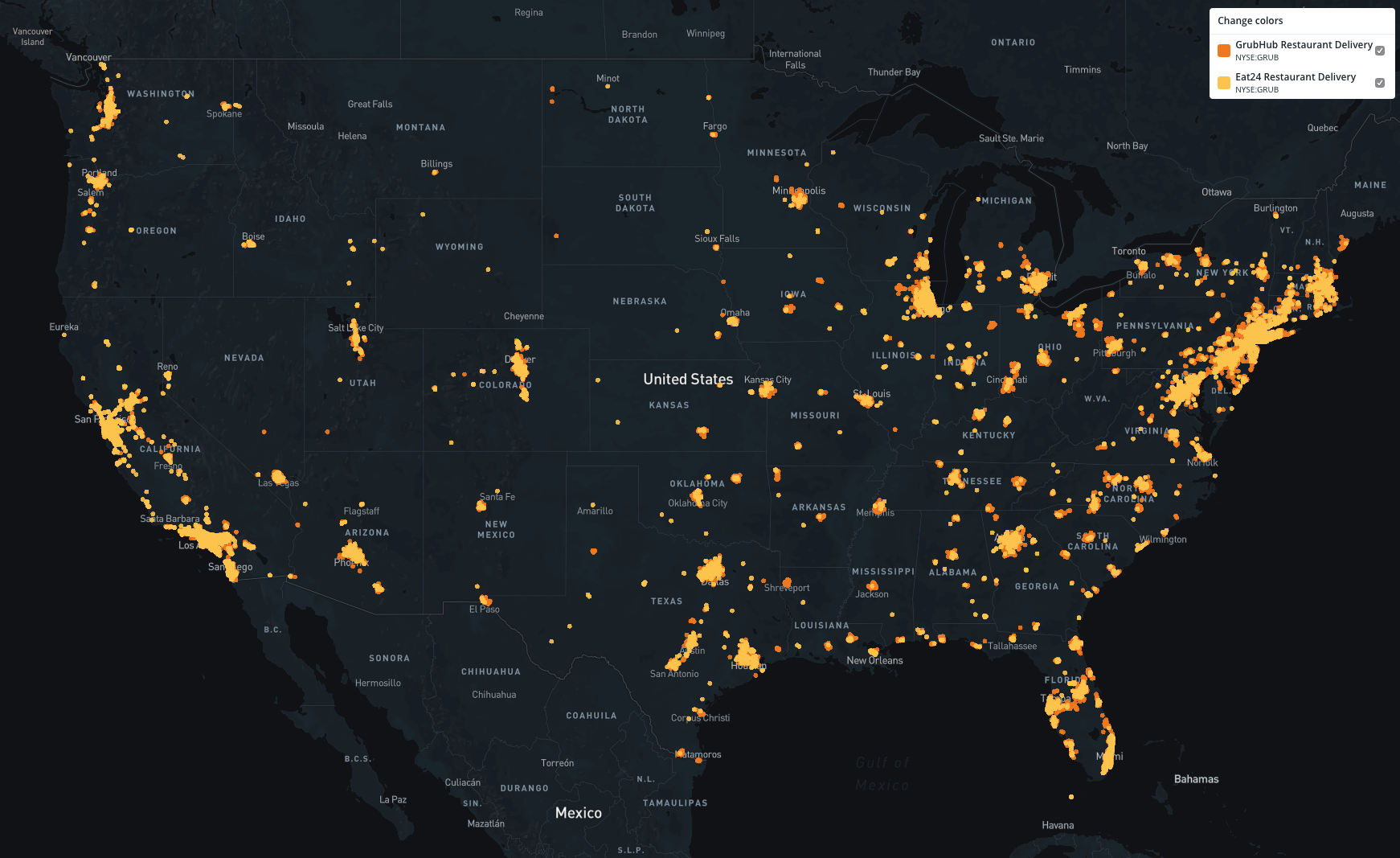 Once a website to just look up menus instead of guessing whether that five-year-old pizza menu is out-of-date, Grubhub is now the mecca of online food ordering.

With its merger of Seamless in 2013, Grubhub sought "to better scale in rapidly growing food-ordering industry." Today, it outweighs its competition in terms of sheer volume.

Update: According to our database, there are 137,755 stores that use Grubhub. A representative from Grubhub said that the company serves over 85,000 restaurants and in 1,600 cities + London.

Another food delivery app within Grubhub's pen is Eat24 which it acquired from Yelp in 2017 for $288 million. Not only does Eat 24 allow Grubhub to offer more restaurants in locations where it already exists, but it also gives it presence in places where no other major food delivery services are available, such as Abiline, Texas. 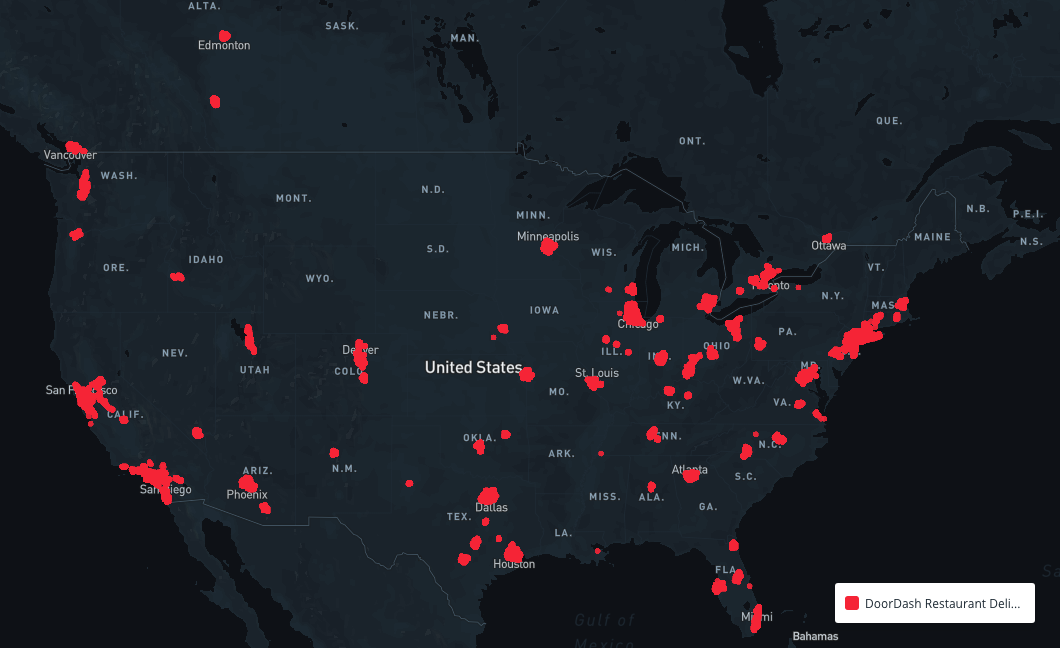 The only other food delivery service provider that rivals Grubhub's reach (for now) is 2013 Silicon Valley-born DoorDash.

Like Postmates, DoorDash also partnered with Walmart and Chipotle this year to increase its reach. The private company has raised almost a billion dollars in funding since Y Combinator, a startup accelerator, backed the company in March 2013.

Caviar: Catering to the elite 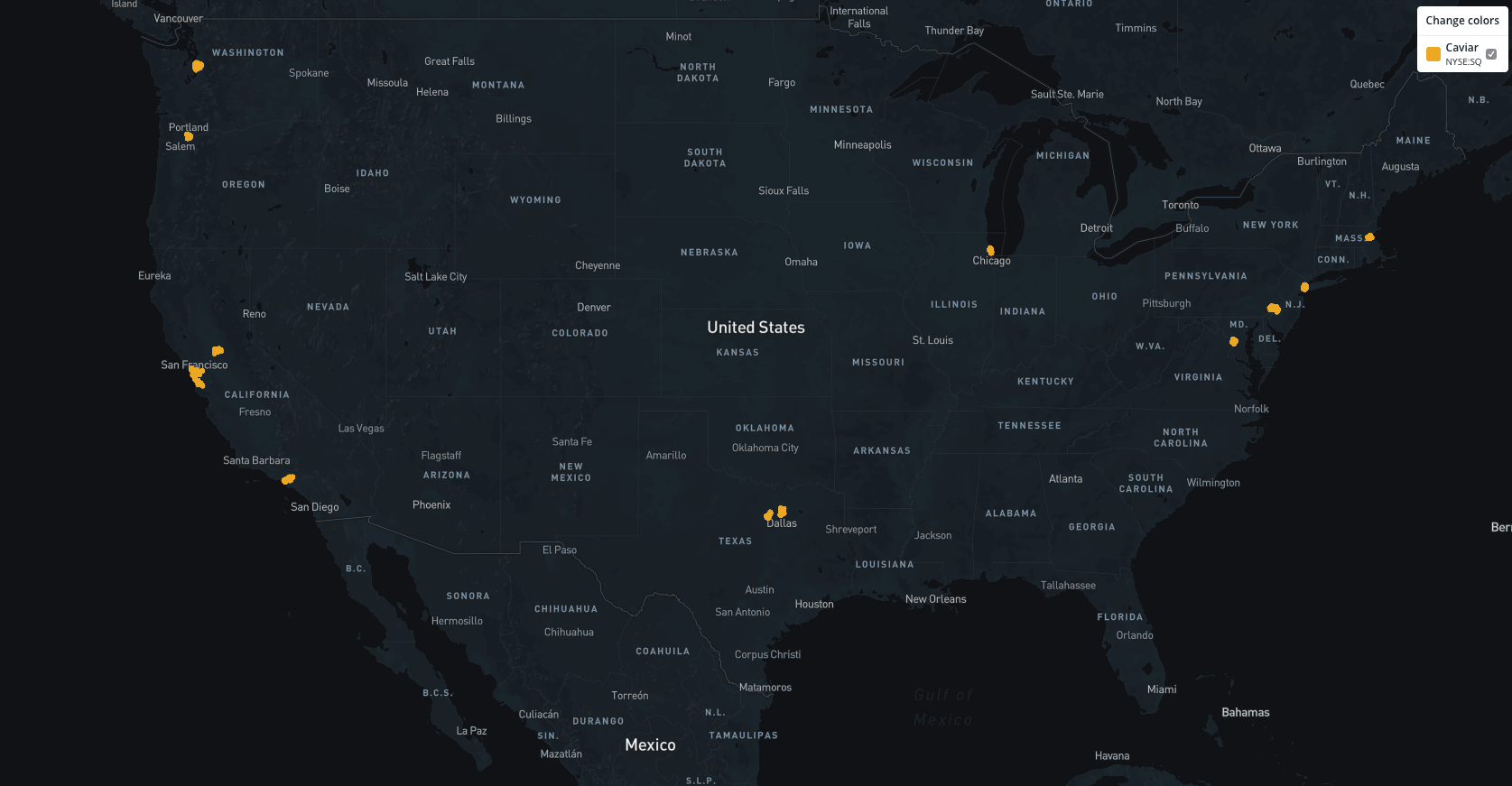 The food delivery app that serves those with the highest average median income also has the smallest footprint.

As of the time of writing, Caviar only services 11 major metropolitan areas, ranging from Dallas-Fort Worth to Sacramento, and does not stray too far outside of major city limits except in Silicon Valley. That, in turn, reflects its population of which it serves.

Caviar delivers from local restaurants, priding itself on having its customers eat artisinal meals on their couches rather than fast food. It even has a few "secret menu" items from places that allow the delivery service access to their kitchens, which leads to some crazy gourmet concoctions like this monkey bread PB&J from New York City neighborhood steak joint Quality Eats. 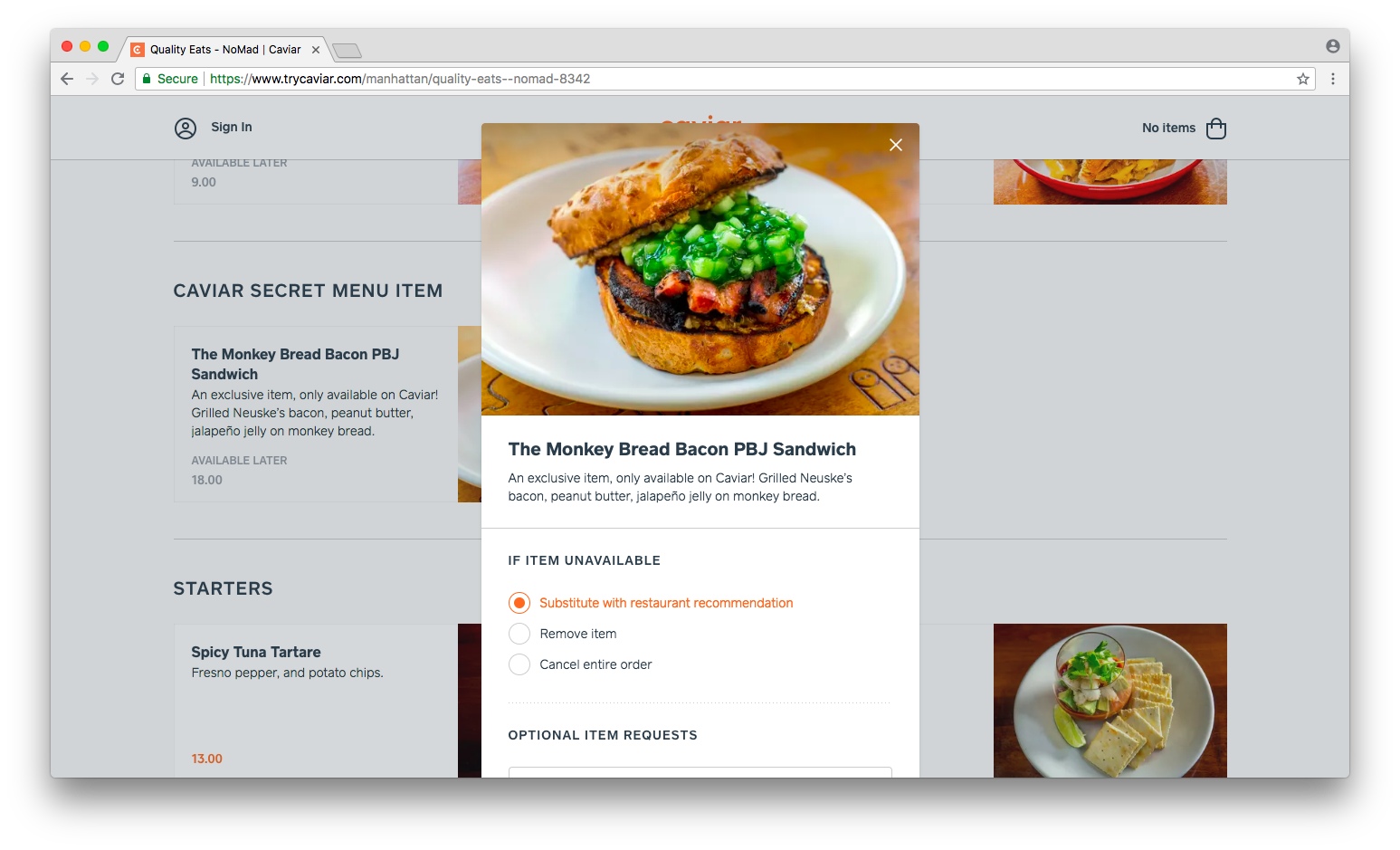 And yes, you can order caviar on Caviar (such as from E.A.T. in Manhattan).

None of these services are available in most suburbs and virtually all rural areas in America, so local restaurants and pizzerias are able to have their drivers roam free. But that may not be for long, especially with Grubhub and Doordash already encroaching on the frontiers.