The ambitious, bold and hungry start their week with The Business of Business!
Features
6.30.20   3:58 PM Features

A walk down Fifth Avenue: what reopening looks like for luxury brands

The flagship stores in Manhattan's premier shopping district tell a story about retail recovery during the pandemic.

Every storefront on New York City’s Fifth Avenue is a beacon for the company’s fleet of department stores. They are the flagships - expensive, high-maintenance advertisements for the brand. Usually flush with wealthy tourists from around the world, the core of Fifth Avenue (between 42nd and 59th Streets) has been an odd sight in the time of COVID and mass civil unrest.

Last Thursday, many of Fifth Avenue’s stores reopened for business... to different degrees. Apple is now taking private appointments, as is the Italian jeweler Bulgari. You can order ahead for curbside pick up from Tiffany & Co., Ann Taylor, and Prada, though experienced shoppers say the options are very limited.

Without constant foot traffic and bands of tourists roaming the street, it’s hard to see how anyone on Fifth could be making money. Still, in the time of the COVID crisis, mass civil unrest, and the oft-talked about retail apocalypse, each luxury brand has its reasons to either keep their flagship open, close down, or flat-out board themselves in.

I saw three distinct kinds of situations unfolding on my latest walk down Fifth Ave, from 42nd to 59th Street:

Victoria’s Secret wants to hide underneath the universe 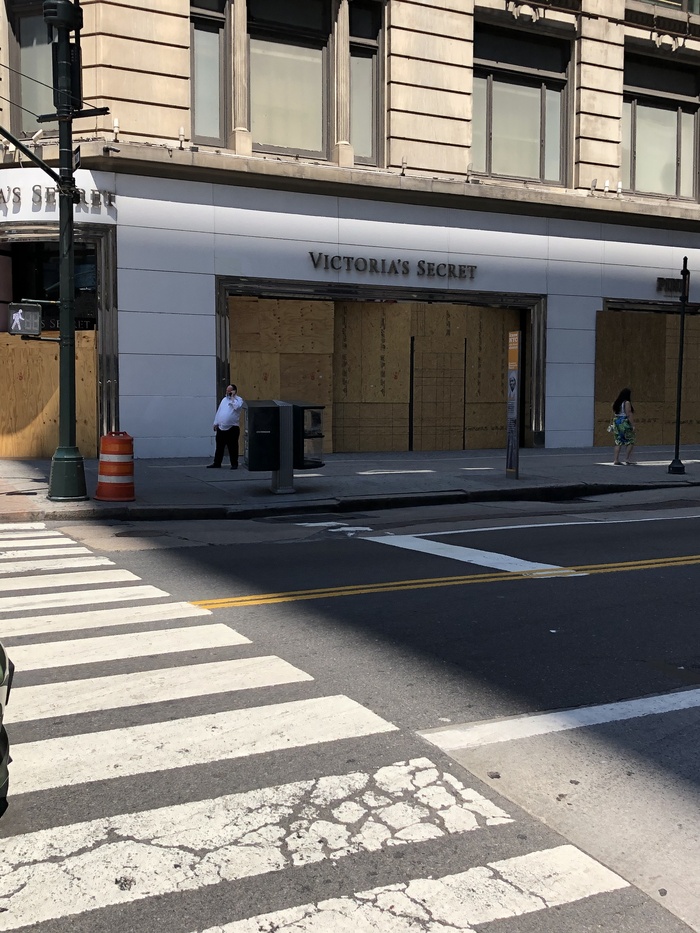 Les Wexner’s poorly-aging brainchild was in trouble even before COVID. When Sycamore Partners paid $525 million for a controlling share in Wexner’s company, L Brands, in February, their goal was to deprioritize Victoria’s Secret ($LB) in favor of boosting the far more lucrative Bath & Body Works.

With everyone already in a panic, Victoria’s Secret gave Sycamore an extra scare when the company skipped April’s lease payments in a desperate attempt to cut costs. Now, that deal is going to court, and might be taken off the table completely.

Thinknum’s data shows that since the February deal, L Brands job postings are down 61% quarter-over-quarter. The company's LinkedIn employee headcount is down 17% compared to the same quarter in 2019.

While VS remains closed, competing brands Calzedonia, Intimissimi, and Falconeri have reopened their Fifth Avenue locations. The Calzedonia Group was already on the rise in early 2020, and plans to heavily integrate e-commerce to streamline the shopping experience. This could be a big blow to Victoria Secret’s online relevance.

It helps explain why both of its Bergdorf Goodman locations, eyeing each other nervously from across Fifth Avenue, are late to re-open (the date is set for Wed 7/1). The zombie retailer’s credit was already complete junk, even before their response to COVID. When the virus struck, the company, in short order, temporarily closed all 43 stores, declared bankruptcy, and furloughed 14,000 employees, only adding to their troubles.

Unfortunately for the Neiman Marcus ($PRIVATE:PRIV_NEIMANMARCUS) subsidiary and luxury department stores like it, a good deal of their appeal is the in-store shopping experience. Of course someone would want to try on a $5,000 dress before taking it home, but there is more to it than that. The wealthy require an attentive clerk who knows their name and their personal style. They want to sip complimentary champagne and look important. They want to bask in the novelty of doing all the above in a strange, new city.

As of yet, those experiences just don’t translate well online, though certain companies are trying to fix that. Until AR/VR becomes more purely functional, and less of a gimmick, it seems  luxury shopping will remain firmly tied to brick and mortar. 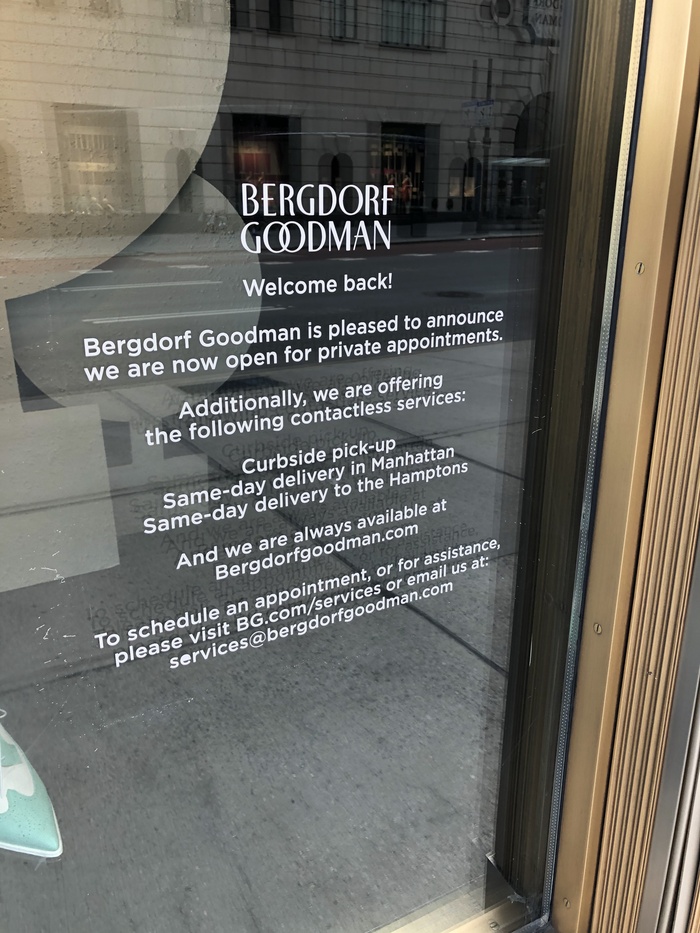 The lack of East Asian tourists coming to America this year is hitting Valentino ($PRIVATE:VALENTINO) especially hard. I had the entire store to myself for the 30 minutes I was there, with the exception of a mean-looking security guard who knew I wasn’t going to buy anything, and an ambivalent sales clerk. Valentino’s prospects for footfall are so bad that it’s now angling to get out of their 15-year lease, deeming their spot on Fifth Ave a money pit.

A huge downfall of luxury retail in recent months comes partially from a lack of online presence from major brand names. UBS Global Wealth Management estimated that while the luxury market is supposed to amount to $340 billion in sales by 2020, only $40 billion would be spent online. Most luxury brands just aren’t where they need to be in terms of online maturity, with weak e-commerce infrastructure that seems unable to respond to demand. This partially explains why hundreds of thousands of consumers turn to closed Facebook groups to trade luxury items, rather than shop with the purveyors themselves. 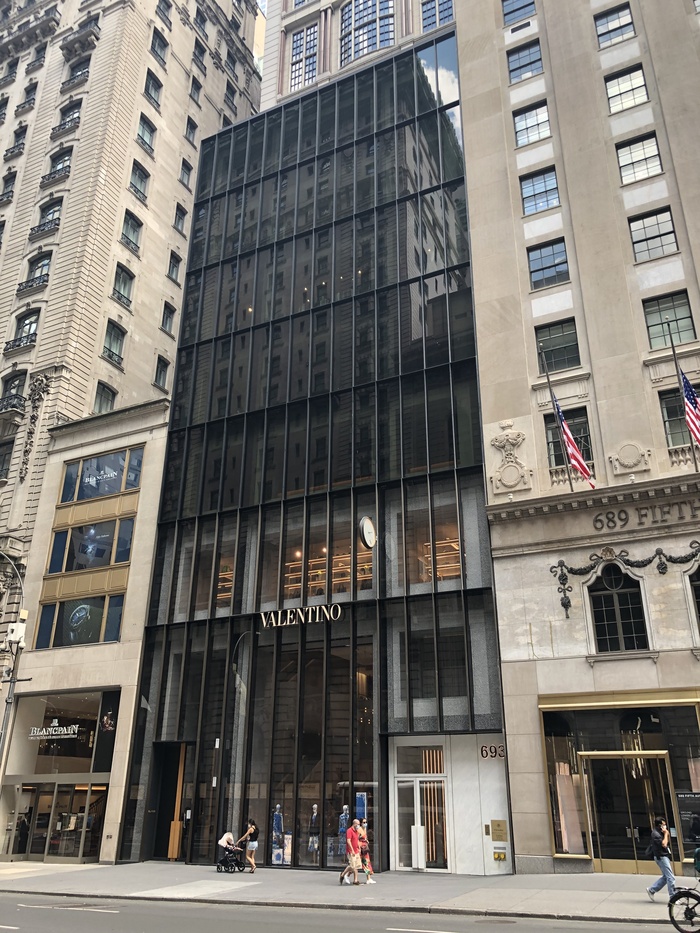 Nordstrom reopened their doors on June 25th, but it’s in for an uphill battle

Nordstrom ($JWN) was dropped by the S&P 500 earlier this month, and after furloughing their core workforce, is now set to close 19 of its stores permanently. Nordstrom also shut down all three of their Jeffrey boutiques, which sold high-end fashion to society's elite. To buoy sales and push customers to their online services, Nordstrom ran a 60% off clearance sale in May.

Saks ($TSX:HBC) seems late to the game with social-distancing workarounds, but better late than never. Most notably, the company is offering stylist consultations over Zoom, private in-store appointments, and same day delivery to The Hamptons for a fee of only $25.

Inditex is undergoing a 44% sales slump, but things could be worse

Zara ($BME:ITX) has seen a bump in online sales, and was the only store I found with a line out front (every customer standing six feet apart). According to The Guardian, Zara’s online sales rose by 50% year-on-year this quarter, and were up 95% year-on-year in April.

This positions them well against similar fast fashion companies moving into the online space. Take for example H&M, whose sales have dropped 50% in recent months. Other competitors like Urban Outfitters, COS and &OtherStories remained closed.

Inditex’s board has made plans to absorb more than 1,000 other stores, but keep Zara and much of its staff intact, transitioning them to remote positions.

Sephora’s return to Fifth Ave will be comparatively painless.

As Julia Gray noted last month, Sephora ($EPA:MC) has excelled in driving engagement and sales with their social media presence. 80 of the cosmetics company’s brands were recently made available for instant checkout on Instagram, activating a younger clientele while bypassing COVID restrictions completely. The beauty retail giant has been seeing a surge in Facebook mentions this year, as likes continue to rise. Mentions are up over 500% from January.

The Sephora flagship on the corner of 47th Street has an easy path ahead of it. Its reopening is further bolstered by a revamped loyalty program and the integration of a product samples subscription box. Sephora is making it more possible everyday to forgo the in-person experience completely. At this point, the reopening of their Fifth Ave location just seems like a bonus.

The Rest Of Them (All Openings & Closings) 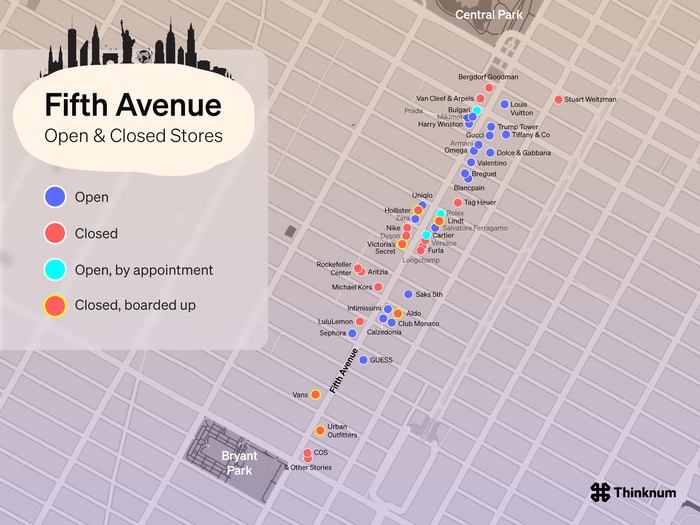 Five Below - open, has a line outside

The North Face - closed, boarded up