Poppy MacDonald went from the halls of Congress, to polling, and then the media - and this turned out to be the ideal set of experiences to gather for her next act, in data.

Today, she leads USAFacts, where she has spent more than a year developing the messaging and content from the non-partisan, not-for-profit data initiative founded by ex-Microsoft CEO Steve Ballmer in 2017.

"The holy grail for us is to visualize data and in a way that people can understand big, complex numbers," she told attendees of Thinknum's first EXDC external data conference in midtown Manhattan earlier this month, adding later, "our hope is that people will use data to drive decision-making." 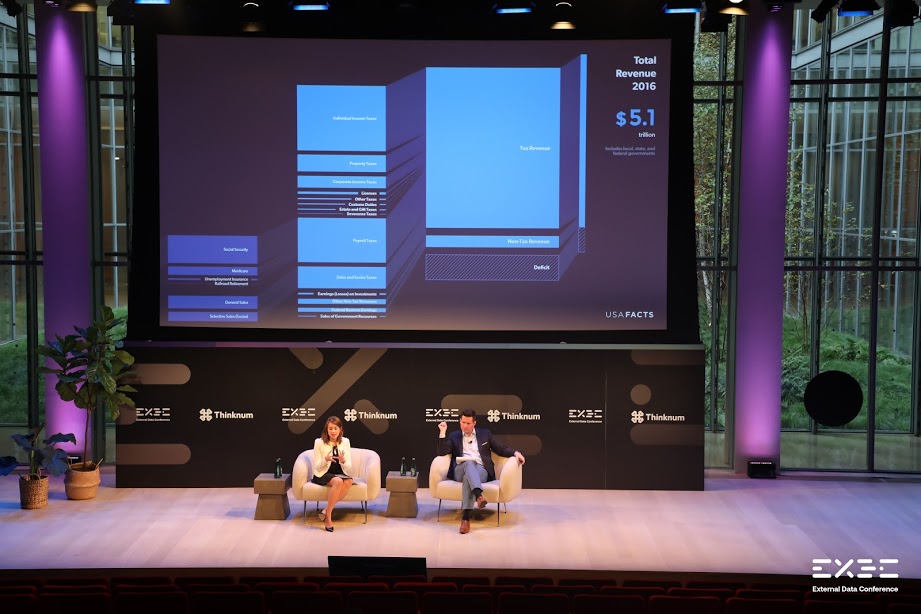 It's a concept that MacDonald was a first-mover on, early in her career.

MacDonald got her career started in Washington D.C., and in just a few years joined Gallup, where she rose through the ranks to become the lead partner of its healthcare practice, working on data-driven consulting engagements. After that, she was President of both Atlantic Media, and then, Politico USA, where she bolstered her resume with years of media leadership experience.

Already, MacDonald's media experience has driven partnerships with US News, where USAFacts is supporting the magazine and website's 2020 election coverage by regularly sharing data sets with journalists. Also, she said, USAFacts has teamed with NORC, a University of Chicago non-partisan research institute tracking business and policy decisions.

"While we may very much disagree on the right policy, we should all start with the facts," MacDonald told EXDC attendees, saying later, "We talk about government data points, or the visualizations we can provide."