Once the face of Kalanick's new ghost-kitchen venture, Eric Greenspan has parted ways with CloudKitchens.

Celebrity Chef Eric Greenspan has parted ways with former Uber CEO Travis Kalanick's ghost-kitchen venture CloudKitchens ($PRIVATE:CLOUDKITCHENS). He is citing differences with the company's approach to virtual kitchens along with several logistical issues for his exit. In an exclusive interview with Thinknum Media, Greenspan confirmed and detailed his decision to step away along with his plans for the future.

After a long run of successful Los Angeles restaurants, including everything from upmarket Maré to fast-casual Greenspan's Grilled Cheese (which at one point had him on virtually every morning show in America), Greenspan was introduced to the concept of ghost kitchens — and subsequently CloudKitchens — by a business partner. The concept of low up-front costs and infinite scalability was appealing, so he signed on as one of the startup's first-star faces.

CloudKitchens leaned into the implied endorsement, using Greenspan's likeness — he's a regular on Food Network and has had his own show — on its website. Greenspan tells us that he still gets daily calls from other chefs — and media — asking for details about what has been a rather mysterious operation under Kalanick. 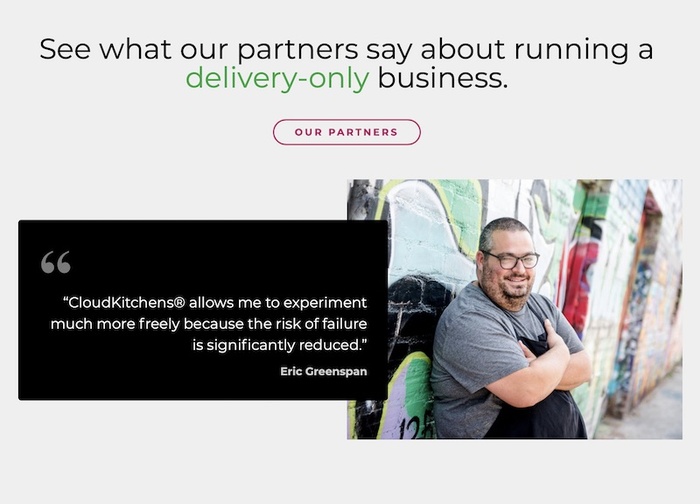 Screenshot from Cloudkitchens.com where Greenspan still appears to be endorsing the service

Greenspan was an eager and early partner for CloudKitchens. He launched several virtual restaurant concepts from its first facility, some of which did better than others. In fact, he says he appreciated the ability to experiment, try a menu, see if it worked, and feel free to fail. Those sentiments echo Greenspan's statement CloudKitchens continues to show on its website: "CloudKitchens allows me to experiment much more freely because the risk of failure if significantly reduced."

But throughout the experiment, he tells us, the system was broken.

"The cost to entry isn't as low as it seems. Sure, the up-front costs can be lower because there's no physical storefront, but that's also the main problem in the end," he told Thinknum Media.

"If you have no storefront, you have no relationship with the customer. They don't know the difference between you and anyone else on an app. You need a sign on the road. With CloudKitchens, you're just a digital brand, and you're competing with thousands of other restaurants in a digital marketplace without the benefit of a storefront, a real location, or Instagram shots of your food in your location. So, in the end, if you are going to make things work with a virtual restaurant, you end up spending just as much, if not more, on digital marketing as you would a lease and front-of-house staff."

Greenspan also cites the buy-low-sell-high business model of Kalanick's CloudKitchens as a problematic factor. Kalanick's team has been buying up distressed properties in order to convert them to ghost kitchens, funded by around $700 million of investment rounds.

But in that model lies a crucial problem.

CloudKitchens launched its first ghost kitchen in Los Angeles in an abandoned warehouse south of Little Korea. The location, Greenspan tells us, limited his delivery radius. It turns out that because CloudKitchens is 100% delivery, it relies on delivery services like UberEATs and GrubHub, which have their own delivery radii.

"The delivery radius at the first location we were all trying to make this work from wasn't good. Four miles in Los Angeles from a warehouse between Korea Town and downtown meant I couldn't serve most of the people who'd heard of me. 'Oh you're making New York-style bacon egg and cheese? Awesome. But I can't get it.'"

Greenspan's departure comes at a time when the delivery industry — and CloudKitchens — are going through a major recalibration. With restaurant closures came a massive rush to delivery for restaurants that had previously avoided it all along with a spike in consumer demand as people ate at home more than ever.

The number of mentions for GrubHub on a daily basis swelled from an average of less than 10,000 per day to 25,000 by the end of April.

Meanwhile, the number of restaurants listed on the Postmates delivery platform skyrocketed from less than 200,000 in February to 337,000 globally by March.

The change in appetite — both for restaurants and consumers — puts the ghost kitchen concept in question, however. Storefront rental costs are likely to decline as the failure rate in the restaurant industry is expected to be severe. Meanwhile, once they can, diners are likely to be eager to get out of the house and enjoy a meal somewhere other than their own kitchens.

The team at CloudKitchens may already know this, however. Last month, Someone attempted to open a storefront at its Koreatown location in which customers could dine in, calling it an "Internet Food Court". The experiment mysteriously shut down within hours, however, and CloudKitchens blamed the gaffe on a "rogue employee", recusing itself of any involvement.

"We don't know how this website got constructed," a source close to Mr. Kalanick told The Financial Times. "Travis wants it to be very clear that this is not something he created. He's very upset."

But the attempt to market a physical storefront — whether it was done by an employee of CloudKitchens or not — echoes the frustrations Greenspan expresses as part of the reason he stepped aside. And the "Internet Food Court" graphics on the windows at 615 N. Western Avenue remain. 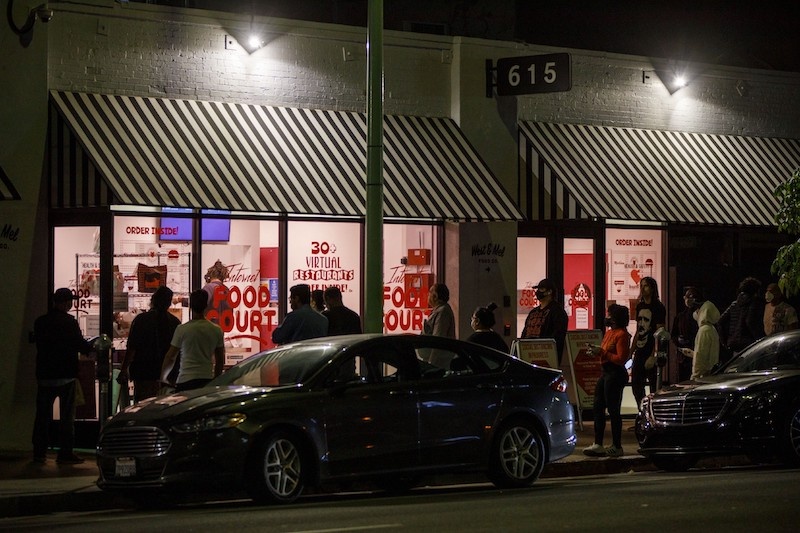 But Greenspan is out, and his absence is likely to make it difficult for Kalanick and Co. to attract new chefs. He is — or was — the only notable face on the company's site.

Greenspan doesn't appear to be completely one with the concept, however. He was coy about his future plans when he spoke to us, but it was clear that he plans to remain in the virtual brand space, insinuating a desire for a "hybrid store-front/virtual model" that would be more advantageous to chefs.

Kalanick may be on the same path now that he's experimented with his own ghost kitchens and watched top talent walk away. He is already using on-hand cash to grab up and develop distressed properties around the country, and he reportedly has plans to hire up his own army of delivery drivers to bring those costs — and revenue — in house, which ostensibly reducing delivery fees for CloudKitchens partners.

So far, though, CloudKitchens as a company isn't growing. The number of LinkedIn profiles that list the company as their employer is a meager 4 and the company has listed the same general 9 job listings for over a month for positions in "Sales" and "Real Estate".

Cloud Kitchens reportedly employs more people than what's being seen by LinkedIn, either because workers are on short-term contracts or because they simply don't use LinkedIn. But there are reports of attrition: The Information reported this week that two senior engineers left the company after recruiting other engineers to work on pre-fabricated kitchens meant to scale-out CloudKitchen's operation.

But if CloudKitchens is losing talent and spokeschefs like Eric Greenspan, it may have a tough time ahead attracting chefs willing to give the model a chance. And if Greenspan can spin up an alternative that puts the interests of chefs like him ahead of business interests based on real-world experience, Kalanick may find this space a bit more challenging to disrupt than that of taxis.

We reached out to CloudKitchens to get a statement on Greenspan's departure, and haven't heard back as of publishing. We'll update when — and if — we do.