If you've ever seen Tokyo at night, it's both figuratively and literally electric. But things are changing as the city sits out the Coronavirus pandemic.

Correction: An earlier version of this article erroneously included incomplete data that reflected a larger drop in energy demand forecasts from TEPCO. We originally included data from an incomplete week, which reflected what we thought was a 90% drop in demand. The drop was not as severe, and we have corrected the time-series here. We regret the error.

The most populous cities in the world are becoming relative ghost towns as shelter-in-place orders become the norm. Technological, financial, and cultural landmarks on the planet are simply empty, devoid of much life in the streets. In New York City, eerie shots of deserted subway stations show stark contrasts to normal daily life.

On the other side of the world, Tokyo is approaching a similar slowdown. Social distancing, quarantines, and work from home guidelines have rendered office buildings, stores, restaurants, industries, and the subway system quiet. And now a mandatory has effectively ended nightlife in Tokyo as well.

The lockdown in Tokyo, a city that's often pictured as a vast landscape of vertical lights is likely to be reflected in energy demand numbers published daily by Tokyo Electric Power Company ($TYO:9501).

In early February, for instance, energy demand weekly averages were at 36,700 MW. By early April, as lockdown became a reality, that number had dropped to below 30,000 MW.

However, the change we're seeing here may just be a seasonal fluctuation as warmer weather reduces electric and gas heating needs, as is shown in a larger spread of demand forecasts from TEPCO.

The data is published daily at www.tepco.co.jp where TEPCO lists daily demand forecasts for the general Tokyo area. TEPCO currents provide energy for Japan's Kantō region, Yamanashi Prefecture, and the eastern portion of Shizuoka Prefecture. Over time that allows us to chart ebbs and flows in demand as a way to understand economic activity in one of the world's largest metropolitan areas. 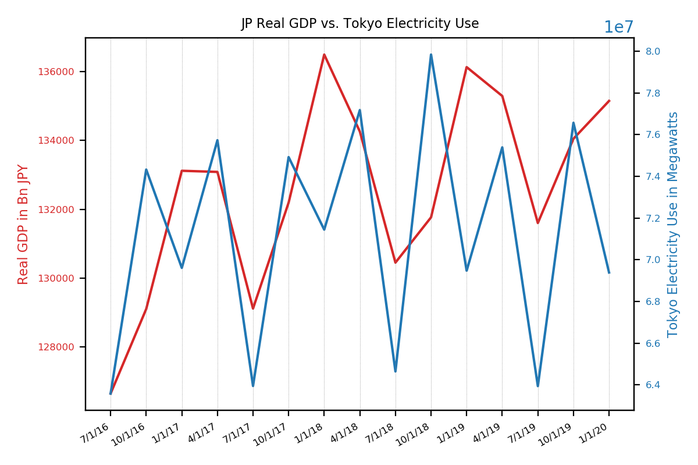 When we last covered this topic last year, we used it as a way to help understand — and predict — shifts in economic activity and ultimately GDP.