The ambitious, bold and hungry start their week with The Business of Business!
Markets
4.29.22   8:57 PM Markets

Edtech’s hot streak is going cold. Here’s how the top players are faring.

Edtech companies were hit particularly hard by an overall decline, but alternative data shows some winners, too.

SaaS companies have taken a particularly harsh beating in the stock market over the past few months, and that includes edtech. After gaining unprecedented momentum during the pandemic, as demand for online educational offerings skyrocketed, many of these companies have started to falter.

According to an analysis by Bessemer Ventures partner Janelle Teng, edtech companies have generally fallen behind other software firms on a number of key metrics, such as projected growth and efficiency of cash burn. Teng’s analysis focused on companies listed in EMCLOUD, otherwise known as the BVP Nasdaq Emerging Cloud Index, which tracks the performance of emerging cloud software businesses.

Stock market data clearly tells the story: When the Covid pandemic shut down in-person education, edtech companies seized on the opportunity to introduce digital learning to students across the world. The valuations of edtech companies unsurprisingly skyrocketed along with many other software-as-a-service companies which greatly outperformed the rest of the stock market. 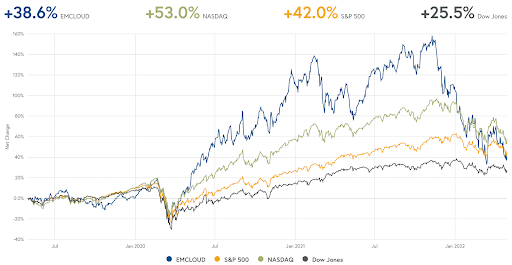 But now schools have reopened after their initial closures, and adoption of educational technology has failed to have staying power. Far from revolutionizing instruction, it may have just been a less-attractive substitute for in-person learning. In fact, a report from Brookings concluded that “...as countries are reopening schools, they are going back to how education was delivered before the pandemic, instead of seizing the opportunity of the disruption to transform education.”

However, not all edtech companies have been impacted by the decline  in the same way, and alternative data can provide some insights as to which firms are faring better or worse compared to the start of 2020. India is home to some of the biggest edtech startups, for instance, and one of its biggest companies is planning to go public, while China cracked down on edtech in late 2021, leading to catastrophic losses in value for its biggest edtech companies.

We used information gathered by Thinknum Alternative Data, our parent company, to highlight the standout trends.

Byju’s and Unacademy are two of India’s largest edtech startups, and both have discussed going public sometime this year. But while Byju’s founder, Byju Raveendran, is so confident in his business that he took out a $400 million dollar loan to invest in his own company last month, Unacademy has had to lay off 1,000 employees over the past few months.

According to web traffic data collected from Thinknum, while both edtech companies saw significant web traffic during the pandemic, the amount of traffic to Byju’s has increased since the start of 2020, while Unacademy’s share has fallen, another sign of struggles for the company.

While some metrics are falling in Byju’s favor, there are rumblings of possible trouble for the company. In India, Byju’s has been plagued by complaints from parents about misleading and high-pressure sales tactics. With the stock market going soft, the company’s hopes for a $48 billion SPAC deal are looking more doubtful.

Edtech isn’t only about K-12 and undergraduate learning — workforce development companies have seen rapid growth over the past decade. Companies such as Pluralsight, Skillsoft, and Udemy offer a range of instructional video courses for developers, business professionals, and several other roles.

When compared with edtech companies that focus primarily on K-12 and undergraduate students, the corporate learning companies show a significantly greater growth in job listings, indicating that the category is continuing to grow despite the edtech sector’s recent troubles.

Coursera and Udemy have the best web traffic in 2022

While several of the edtech companies tracked by Thinknum experienced a bump in traffic as the pandemic hit in 2020, Pluralsight’s web traffic share has since declined, while Coursera and Udemy have largely held on to their web traffic gains.