The ambitious, bold and hungry start their week with The Business of Business!
Markets
4.21.22   4:07 PM Markets

The ‘SaaSacre’ may be slowing, but what’s next for cloud companies in 2022?

SaaS companies have slumped below the market in the past six months — is this merely a correction from their recent explosive growth, or a troubling sign for the future of the cloud?

Everything looks fine when you’re zoomed out. SaaS companies have outperformed the rest of the stock market significantly over the past ten years, with particularly explosive growth occurring in 2020 and 2021.

SaaS companies are some of venture capital’s favorite investments to make, given their capacity to scale rapidly and earn recurring revenue. SaaS companies are often evaluated based on the ratio of their enterprise value — the value of a company including its short- and long-term debt — to its projected revenue over the next twelve months. This metric prioritizes growth over all else, and SaaS companies frequently burn through tons of capital in order to scale quickly. 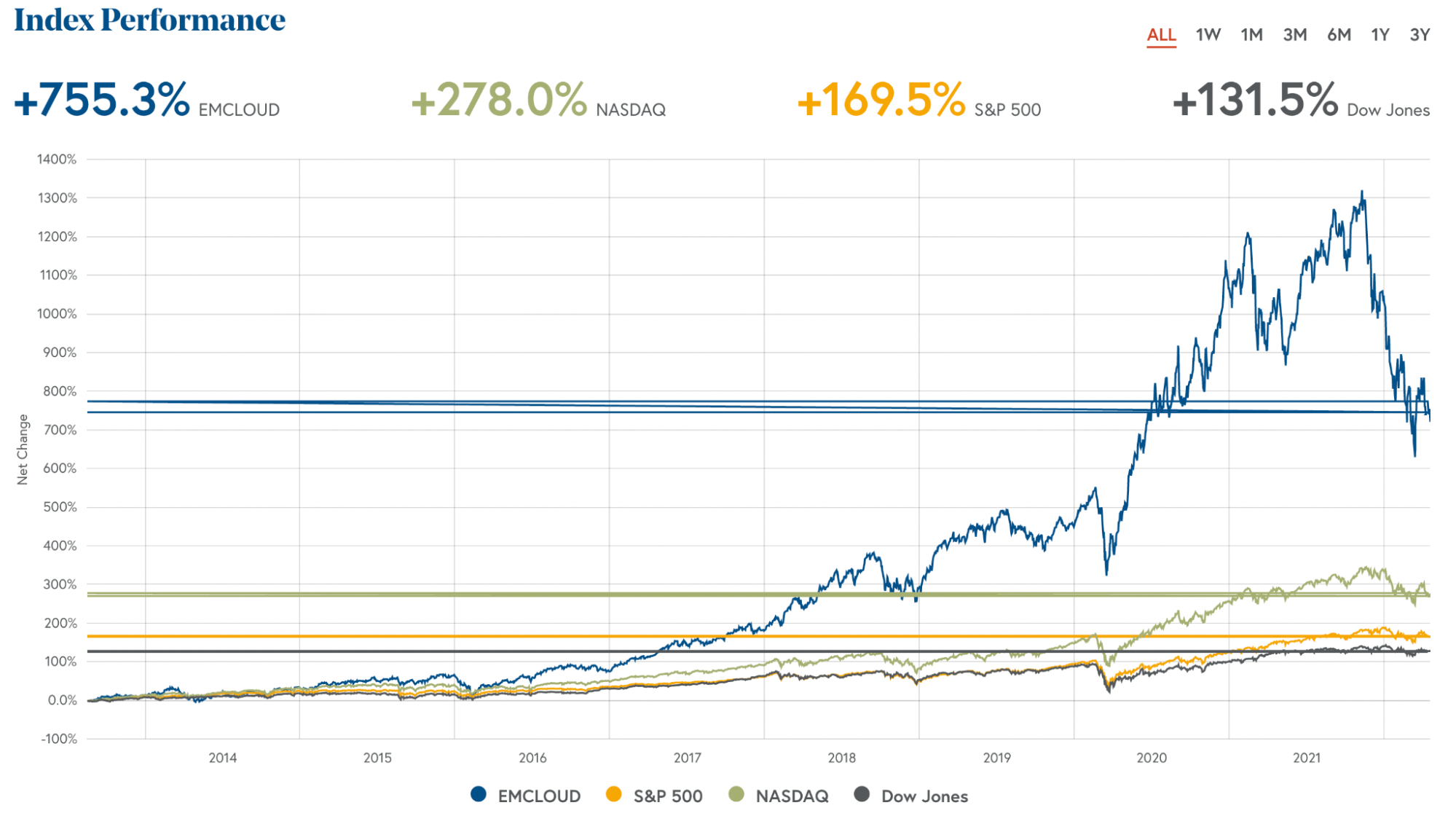 However, in the last six months, SaaS companies have taken a beating in what some have dubbed the ‘SaaSacre.’ Bessemer Venture Partners, a VC firm with almost $10 billion under management, has an index of emerging cloud companies called EMCLOUD. EMCLOUD’s companies in the past six months are down nearly 40%, compared to the 10% loss experienced by the rest of Nasdaq.

What explains the recent decline? Janelle Teng, an investor at BVP, proposes two main reasons in her analysis of the SaaSacre. The first is that high inflation and rising interest rates make future projections of revenue less valuable. The second is that geopolitical turmoil has thrown the future of SaaS in Russia into turmoil. 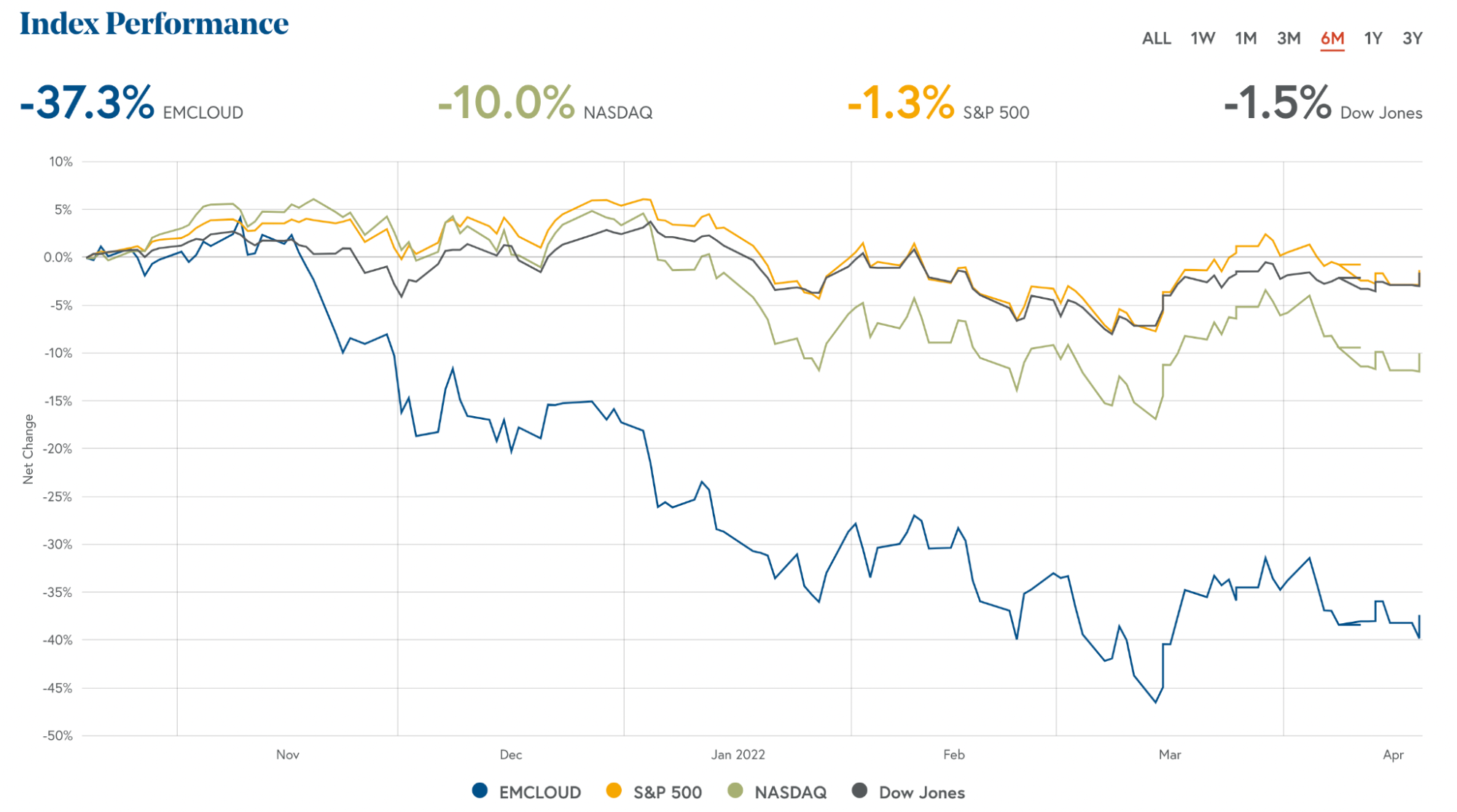 But the inverse correlation between interest rates and EMCLOUD companies that Teng notices is true of non-cloud companies as well, given the general result of high interest rates lowering stock prices. And while some SaaS companies are pulling out of Russia completely, Russia and Ukraine together account for only 1% of global technology spend.

The SaaS selloff has affected various SaaS sectors differently, Teng notes. Cybersecurity companies lead the pack in revenue growth, both realized and projected, while EdTech companies in last place on both counts.

One metric that explains this divergence: efficiency score, or how much growth the companies are achieving compared to their capital burn. Cybersecurity companies have grown much more efficiently than those in EdTech, which helps explain why they haven’t been affected as harshly as other SaaS firms — spending money to make money only works if your company actually makes money.

Investors are now wondering whether the SaaS selloff will continue, or if the recent decline in stock price is merely a correction from the explosive growth seen in 2020 and 2021. Alternative data provides some insight. According to job listing data gathered from Thinknum, the parent company of The Business of Business, though stock prices may be down across the board, SaaS companies show continued growth in job listings, indicating plans for growth.

This sample of software-as-a-service companies represents those among the highest forward revenue multiples, or the amount a company expects to grow its revenue in the next year, like Cloudflare, Datadog, and Snowflake, and also companies on the lower end of the spectrum, like Yext and Sumo Logic.

Companies with higher projected revenue show significant increases in job listings; Snowflake, for example, has 932 listings compared to 216 at the start of 2020. However, companies like Yext and Sprinklr which rank lower than competitors when comparing forward revenue multiples show indications of reduced job listings. This corroborates Teng’s argument that the SaaS selloff isn’t affecting all companies the same.

Similarly, most companies aren’t seeing any major declines in headcount, according to LinkedIn data tracked by Thinknum.

Companies on the lower end of EMCLOUD when it comes to projected revenue growth, again, have shown only modest gains or even small declines in headcount.But  several companies have seen over 30% growth in the past six months — during the SaaSacre.

So, it looks like even though declining stock prices might delay planned IPOs or reduce venture capital valuations, SaaS companies could still be an attractive target for investors in 2022.