The ambitious, bold and hungry start their week with The Business of Business!
Markets
2.28.18   8:34 PM Markets

In a direct response to the Parkland shooting last week that killed 17, the CEO of Dick's Sporting Goods, Edward W. Stack, has announced that his stores will no longer sell assault-style weapons, also known as modern hunting rifles. The chain will also raise the age requirement for firearms purchases to 21, and end the sale of high-capacity manazines.

Dick's, along with its subsidiary Field and Stream, is one of the nation's largest retailers of sporting goods with more than 720 stores.

Bass and Cabela's only combine for 160 stores, though.

We at DICK'S Sporting Goods are deeply disturbed and saddened by the tragic events in Parkland. Our thoughts and prayers are with all of the victims and their loved ones.

But thoughts and prayers are not enough.

We have tremendous respect and admiration for the students organizing and making their voices heard regarding gun violence in schools and elsewhere in this country.

We support and respect the Second Amendment and we recognize and appreciate that the vast majority of gun owners in this country are responsible, law-abiding citizens. But we have to help solve the problem that's in front of us. Gun violence is an epidemic that's taking the lives of too many people, including the brightest hope for the future of America - our kids.

Following all the of the rules and laws,  we sold a shotgun to the Parkland shooter in November 2017. It was not the gun, nor the type of gun, he used in the shooting. But it could have been.

Clearly this indicates that the systems in place are not effective to protect our kids and our citizens.

They followed up with a call for legislative action, as well:

How has that been playing out on Twitter? While there have been many negative comments, and many NRA supporters calling for a boycott and un-following Dick's, they've netted more than a thousand new followers an hour since making the announcement.

On Facebook, the company pages has added a net 80,000 likes, and the statement has been shared an incredible 430,000 times, with 135,000 comments so far. And the numbers are overwhelmingly supportive:

On Twitter, the positive comments seem to be outweighing the negative as well:

Support for gun control is peaking, according to pollster Quinnipiac:

Today's result is up from a negative 47 - 50 percent measure of support in a December 23, 2015, survey by the independent Quinnipiac (KWIN-uh-pe-ack) University Poll.

Support for universal background checks is itself almost universal, 97 - 2 percent, including 97 - 3 percent among gun owners. Support for gun control on other questions is at its highest level since the Quinnipiac University Poll began focusing on this issue in the wake of the Sandy Hook massacre:

And that's building on a steady trend the past few years, after more than a decade of falling support: 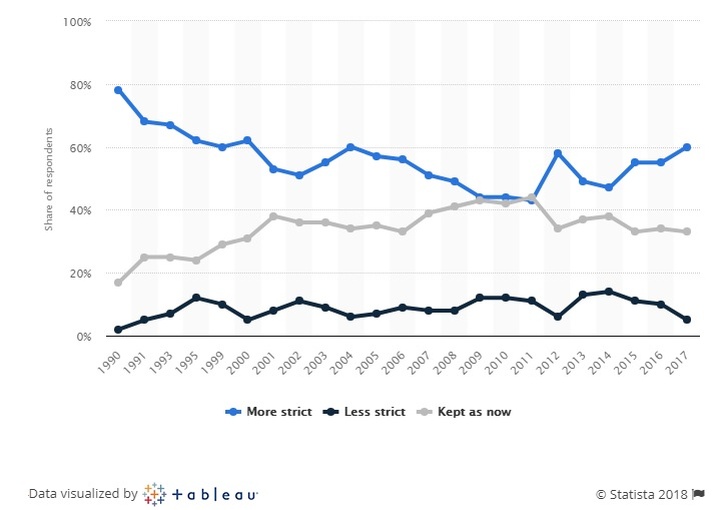 On the other hand, one of the reasons that this debate has been so polarizing and protracted (despite overwhelming support for increased gun contol) is that the folks who are pro-guns/pro-Second Amendment have been - at least in the past - more active than their opponents on the matter.

This graphic from Politico/Morning Consult pretty much sums that up. It remains to be seen how much that negativity will carry forward - but as you can tell from the tweets above, a lot of these folks hold grudges.

Goldman Sachs is bringing US workers back to the office as early as June 14, and other Wall Street giants aren’t far behind.
Ivan De Luce , Julia Gray
5.6.21   4:00 PM
Markets
View All