Developer interest in AWS outpacing that of Azure, according to Stack Exchange data

Marketshare and revenue growth is one thing, but day-to-day developer interest in platforms is another.

We track activity for major players on Stack Exchange, a question-and-answer community frequented by software developers who are looking to exchange (ahem) information on the platforms they use. When it comes to relative interest in AWS and Microsoft Azure, Amazon ($AMZN) and Microsoft's ($MSFT) cloud computing platforms, AWS began to outpace Azure in early 2018 in terms of the number of questions and answers being posted. What's more, it has since held that lead and appears to be building distance.

If there's one enterprise technology industry that's talked about more than any other these days, it'd have to be cloud computing platforms. That's not only because it's omnipresent in today's software development universe, but also because its largest players are also the largest players in tech.

According to Synergy Group, AWS (Amazon Web Services) currently owns 34% of the cloud computing market space, making it the largest by far. Microsoft has 11%, Google has 8%, and IBM tails with 6% of the market. 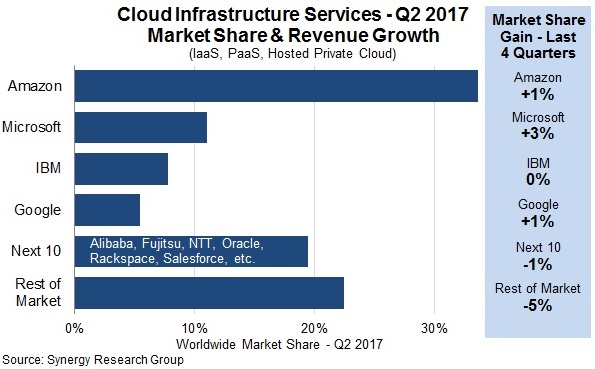 But Synergy also notes that AWS's growth rate as a business — at least in terms of market share — is moving at a slower pace than that of Microsoft. It also notes that revenue growth in the cloud-computing space for both Microsoft and Google are both outpacing that of Amazon.

Marketshare and revenue growth aside, if the people at AWS want any comforting news, it's that developer interest continues to grow and, at least according to this metric, shows no signs of slowing down any time soon. Reporting revenue growth or market share changes may comfort investors, but it's the day-to-day interest from customers — in this case, developers — that might be the long tell.