The ambitious, bold and hungry start their week with The Business of Business!
Markets
3.24.22   8:34 PM Markets

Everyone’s getting takeout, but no one’s making profits: what’s behind D.C.’s lawsuit against Grubhub

Burning cash faster than calories, Grubhub, DoorDash, and Uber Eats are racing to the proverbial bottom of an unprofitable industry.

The lawsuit Washington D.C. filed Monday against Grubhub contains some pretty damaging accusations, including claims that the food delivery app hides fees and lists restaurants on its platform without their consent. And though the suit drew the predictable round of bad headlines, it’s really a symptom of the larger problems facing the company – and the online food delivery industry as a whole.

"In an apparent effort to optimize its revenue, Grubhub has employed a number of unfair and deceptive practices with respect to the advertising and promotion of its services to District of Columbia consumers," the lawsuit states.

The key phrase for understanding the bigger picture is "apparent effort to optimize its revenue." There is nothing “apparent” about the effort. Grubhub and its competitors Uber Eats and DoorDash are all in a mad scramble to generate more revenue, and that, at least allegedly, can lead to the use of some questionable tactics.

These companies are looking to boost revenue, not to make more profits. Why? Because there are no profits. Despite burning billions of dollars of cash, food delivery apps are nowhere close to turning a profit. 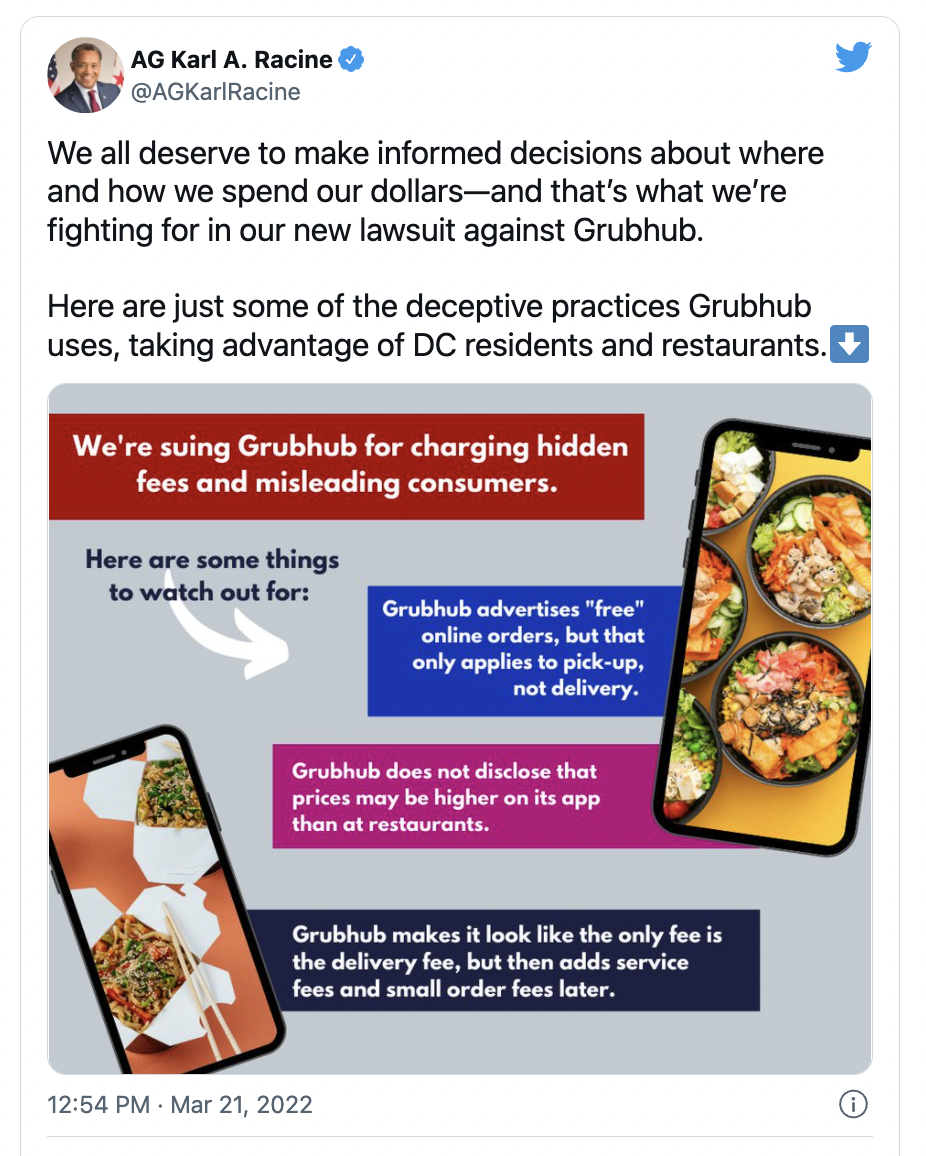 The industry's strategy for the time being seems less about winning than being the last company not to lose, according to Burt Flickinger, managing director of consulting firm Strategic Resources Group. The ultimate goal is mere survival, he said.

"The economics are brutal," Flickinger said. "The apps are stuck in no man's land right now."

Competition for restaurants, consumers, and drivers is already sky high. And with inflation, including food prices, on the rise, more people are opting to cook than order out, he said.

Grubhub is living proof that being first doesn't necessarily guarantee success. The company debuted in 2004, about a decade before rivals Uber Eats and DoorDash, with the idea of replacing paper menus with digital versions.

Over the ensuing years, Grubhub worked hard to establish relationships with restaurants, acquired Dotmenu, the parent company of AllMenus and Campusfood, and merged with rival Seamless. Grubhub went public in 2014 and the following year began offering online delivery in 50 total U.S. cities.

But Flickinger asserts that its IPO was a hasty move meant more to cash out investors than to effectively grow the company. Grubhub expanded too fast and lacked the money and skills to develop its technology and customer service, he said.

"Grubhub overextended itself and is now perpetually shorthanded," Flickinger said. "Its reach exceeded its grasp."

Meanwhile, the company continued to lose ground against rivals. As of May 2021, DoorDash commanded top market share in major cities like San Jose (77%) Houston (56%), Philadelphia (51%), and San Antonio (51%), according to a study by consulting firm McKinsey.

Uber Eats – together with Postmates, which Uber bought in 2020 for $2.65 billion – was number one in New York and Los Angeles. To add insult to injury, Grubhub trails both DoorDash and Uber Eats in Chicago, the city of its birth.

The DC lawsuit focuses on Grubhub's allegedly listing restaurants on its platform without their consent.

When a customer orders food from those "non-partner" restaurants, the driver travels to the business and makes the order. Since October 2019, Grubhub has listed over 1,000 non-partner restaurants, according to the complaint.

“During the past year, we've sought to engage in a constructive dialogue with the DC Attorney General’s office to help them understand our business and to see if there were any areas for improvement," the company said.

"We are disappointed they have moved forward with this lawsuit because our practices have always complied with DC law, and in any event, many of the practices at issue have been discontinued. We will aggressively defend our business in court and look forward to continuing to serve DC restaurants and diners.”

But this isn't the first time Grubhub was accused of such wrongdoing. In 2020, two restaurants, one in California, one in North Carolina, filed a proposed class action lawsuit against Grubhub, arguing the tactic causes  “significant damage to their hard-earned reputations, loss of control over their customers’ dining experiences, loss of control over their online presence, and reduced consumer demand for their services.”

In the quest for revenues, Flickinger said he isn't surprised if the food delivery apps push the limit on what's legal or acceptable.

The global food delivery market is worth more than $150 billion, having more than tripled since 2017, according to McKinsey. In the United States, the market has more than doubled during the Covid-19 pandemic, following healthy historical growth of 8 percent.

But competition remains intense among DoorDash, Uber Eats, and Grubhub as each company tries to outlast the other. During the pandemic, many restaurants closed or reduced operations. And Flickinger predicts food inflation, exacerbated by supply chain problems, will continue to get worse in the months ahead.

Meanwhile, new companies continue to enter the market. Food delivery app startups that have received venture capital funding in recent years include: Wolt ($530 million), REEF Technology ($700 million), and Rebel Foods ($26.5 million). Plus individual restaurants might decide just to offer their own delivery service rather than rely on third party apps.

Until the herd thins out, profits will be hard to find, Flickinger said, and Grubhub and its competitors will continue to play a game no one can win.