The ambitious, bold and hungry start their week with The Business of Business!
Features
8.5.21   12:41 PM Features

Delivery Wars 2.0: How Just Eat Takeaway, Uber Eats, Deliveroo, Zomato and others match up in the multi-billion dollar market

We broke down what you need to know about the biggest food delivery conglomerates, where they dominate and how they grew to their current scale.

This M&A frenzy was, in part, thanks to the pandemic. CEOs looked to shore up cashflow and boost customer numbers as people roughly doubled their spending on takeout. But consolidation had already become the way of the industry. In 2018 and 2019, the food delivery industry saw 25 mergers and acquisitions, valued at more than $20 billion. When customers are often choosing from more than half a dozen apps to deliver their meal, owning two or three of their options is more attractive to companies than scrapping for every sale. More customers means lower delivery fees, giving larger, consolidated companies an edge over smaller ones.

At this point, the food delivery industry is dominated by just a handful of empire companies, some of which operate under many different brands around the world. The Business of Business broke down what you need to know about the biggest food delivery conglomerates, where they dominate and how they grew to their current scale.

Before Just Eat Takeaway was born last February, both Just Eat and Takeaway.com, which were both founded in the 2000s, had substantial numbers of subsidiaries. Under Just Eat were Australia’s Menulog, Canada’s SkipTheDishes, and Brazil and Mexico’s iFood. Takeaway, which had already acquired UK’s Hungry House, Poland’s Pyszne.pl, Israel’s 10bis and several of Germany’s top services: Lieferando.de, Lieferheld and Foodora, quintupled the size of Just Eat’s restaurant network.

Just Eat Takeaway’s acquisition of Grubhub represents a campaign to enter the US and challenge Uber Eats and DoorDash. Grubhub, which has owned Seamless since 2013, has a 17% US marketshare and per our data, delivers from roughly 494,118 restaurants. In the US, it’s restaurant roster is dwarfed only by DoorDash, which covers 687,360 restaurants. According to Reuters, the deal officially makes Just Eat Takeaway the largest food delivery company in the world outside of China, with 70 million users worldwide. Following the deal, Just Eat Takeaway’s four biggest markets will be Germany, the Netherlands, the UK and the US.

Uber began to aggressively expanding its food delivery services to make up losses to their rideshare business during the pandemic. (The company remains reliant on Eats as they face a driver shortage). It first made a bid for Grubhub, which would have created a company with a combined US market share of 55%, beating out DoorDash’s 45%. After Just Eat Takeaway nabbed it, they had to settle for Postmates, bringing Uber Eats’ share up from 29% to 37%.

It makes sense why Grubhub was Uber Eats' first choice. According to our data, out of the 451,444 restaurants that Uber Eats delivers from, only 3,411 overlapped with Grubhub’s 494,118 restaurants, meaning the acquisiton would have added over 490,000 restaurants to their network. Still, Postmates isn’t a bad consolation prize: Uber Eats already served 32,887 of Postmates’ 413,181. As such, the deal got them into 380,000 new restaurants. Postmates, which is big in Phoenix, Las Vegas, Los Angeles and San Diego, especially bolsters Uber Eats in the southwest and California. 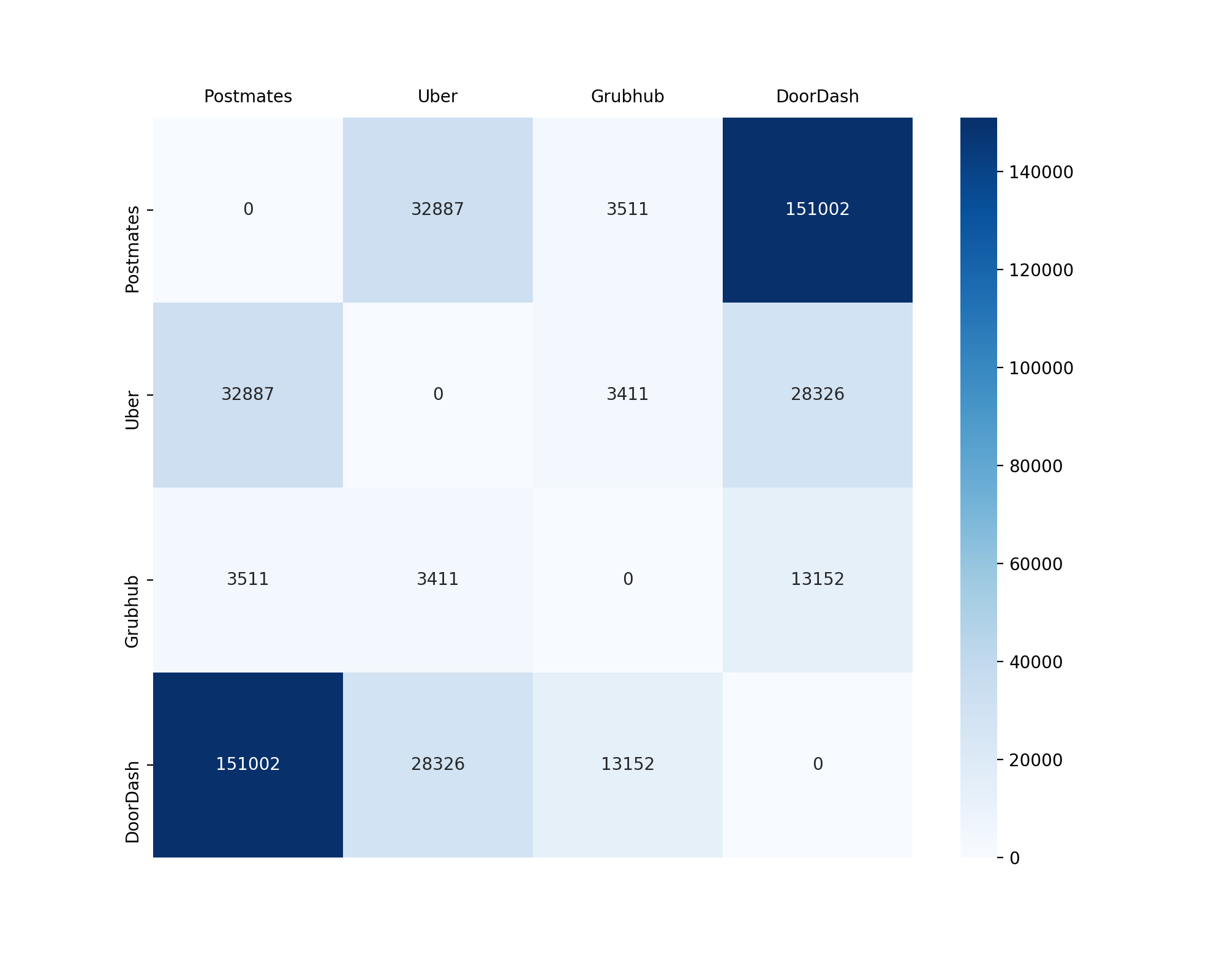 Abroad, Uber Eats has opted to launch its own operations rather than buy up local companies. But they’ve sometimes struggled to make inroads. Uber Eats has pulled out of a slew of Asian and Middle Eastern countries after failing to nab the first or second spot. In 2019, they exited the South Korean citing steep competition. Last year, Uber Eats sold their Indian operations to Zomato, their United Arab Emirates operations to Careem and pulled out of the Czech Republic, Honduras, Egypt, Romania, Ukraine, Saudi Arabia and Uruguay altogether.

The company’s biggest markets today are in North America and western Europe, though wisely they’ve stayed out of Germany where Just Eat Takeway dominates. In Asia, they operate only in Japan and Taiwan and in Latin America, their territories are Brazil and Mexico. Uber Eats latest project is challenging Amazon and Instacart in the realm of grocery delivery. The company recently expanded grocery delivery to 400 new cities, thanks to a partnership with Safeway and Acme.

DoorDash is the brand to beat in the US. In 2019, the company surpassed Grubhub and Uber Eats and its dominance wavered. Today, the brand commands 55% of America’s food delivery sales. Although DoorDash is only in the US, Canada and Australia, our data shows they deliver from over 687,000 restaurants. DoorDash is operates only under its flagship brand except for Caviar, the gourmet-oriented food delivery app that it picked up in 2019. California, New York, Florida, Texas, and Illinois are its top five markets in the US.

Uber Eats and Just Eat Takeaway might have a new competitor in Europe soon. DoorDash has reportedly been scoping out acquistions in Europe, especially in the UK and Germany within restaurant and grocery delivery. According to Bloomberg, Turkish retail delivery app Getir and Berlin-based grocery delivery app Gorillas might be on its radar.

Delivery Hero was founded in Berlin in 2011 but has largely left Western Europe and the US to their competitors, instead opting to position itself as a leader in Asia, the Middle East and eastern Europe. In 2015, Hero bought Talabat, which operates in Kuwait, the UAE, Bahrain, Oman, Qatar, Jordan, Egypt and Iraq, from Germany’s Rocket Internet. Since then, they’ve bought up a number of other Middle Eastern brands, including United Arab Emirates’ (UAE) InstaShop, Kuwait’s Carriage, Egypt’s Otlob. In 2019, Delivery Hero also picked up Zomato’s business in the UAE. Many of these brands have been absorbed into Talabat, which they’ve positioned as their central brand in the region.

The company has also made their ambitions in Asia clear. In 2016, it made a key acquisition of FoodPanda, which was recently crowned the biggest food delivery company in Asia outside China. In 2020, Delivery Hero bought controlling stake in Woowa Brothers’ Baedal Minjok, increasing their reach in the country. They also plan to expand grocery delivery in Asia under Foodpanda’s Pandamart. According to Delivery Hero’s website, they serve over 500,000 restaurants worldwide.

Zomato’s $1.2 billion IPO last week was one of India’s most closely watched IPOs to date. The company, which is backed by Jack Ma's Ant Group, jumped over 80% on its first day, reflecting that the company, which launched as Foodiebay out of New Delhi in 2008, has become one of the leaders in southeast Asia. Zomato operates internationally in 24 countries under its own name, though Italy’s Cibando, the US’s Urbanspoon and NexTable and Poland’s Gastronauci have all been folded into its brand. It’s especially dominant in Indonesia and the Phillipines, Indonesia and Sir Lanka. In its home market, the company is battling it out with Bangalore-based Swiggy for dominance but they took out a key competitor last year, acquiring the Indian operations of UberEats. Like many of its global peers, Zomato is looking to grocery delivery to get a leg up: the company recently invested $100 million into Indian online grocery delivery app Grofers.

The last few years for Deliveroo have been a rollercoaster ride. The UK delivery company was struggling with sales before the pandemic but turned their luck around with help from a nearly $800 million cash injection from Amazon, which previously acquired a 16% stake in the company in 2019. However, their IPO sank in March, leaving its mark as one of the London Stock Market’s worst ever IPOs. Their market cap declined nearly $2 billion from its $7.6 billion starting point by the end of day one.

Regardless, Amazon seems to be betting on Deliveroo as its future in food delivery, after the e-commerce giant shut down their own attempt, Amazon Restaurants in 2019. With their help, Deliveroo has managed to stay a top competitor in the UK. As of Februrary, Deliveroo’s market share had jumped up to percent 26%, just behind Uber Eats at 27%. Though they seem concentrated on shoring up their position in the UK, Deliveroo also operates in eleven other markets around Europe, Australia, Asia, and the Middle East.

Meituan, the food arm of the e-commerce conglomerate of the same name, is confined to China. But it rules over 65% nation’s largest food delivery market. No other country spends as much as China on takeout — in 2019, Chinese food delivery did $45 billion in sales, nearly double that of the US. As such, in some ways, Meituan is in a league of its own. As of 2017, there were nearly 3 million restaurants registered on the app and business has only picked up since then. Last year, the company hit a valuation of $100 billion amidst the pandemic’s takeout craze. China’s market is similarly consolidated to the US and Europe. Meituan’s main rival in takeout delivery in China is Ele.me, a service owned by Alibaba, which makes up about a third of the market. Meituan hasn’t signaled plans to expand into other countries in Asia, but it has been staffing up to new sectors such as “group buying,” in which individuals shop for large groups of friends, family or neighbors.

Meituan has been hit hard in the last few months by fines and investigations from the Chinese government for anti-competitive policies. In April, it was slapped by an antitrust probe investigating the company’s efforts to stop its partner restaurants from selling on rival delivery sites (Ele.me paid a $2.8 billion fine last month for the same issue). Last week, Meituan’s stock plummeted 14% after the government announced it would investigate the company’s minimum wage and health insurance practies. However, given no competitor in the country — or the world — can compete with their size, it’ll take much more than some fines or few months of shaky stocks to upset their reign.