The ambitious, bold and hungry start their week with The Business of Business!
Markets
5.6.19   7:54 PM Markets

David Einhorn is betting on AerCap stock, with the expectation the airplane lessor will benefit from an industry that is getting more consumers and less cyclical market exposure.

Einhorn said he favors airplane leasing companies, but he is bearish on rail car leasing firms, he said May 6 at the Sohn Conference in New York.

"Air traffic is expected to continue doubling every 15 years," Einhorn said during his presentation, noting that rail leasing is more cyclical. Further, he explained, aircraft tend to retain value longer into the asset's life, allowing lessors to earn more from well-maintained planes.

Our data shows JetBlue ($JBLU) is one example of an air carrier that has seen attention from consumers rise over the last few years. The chart above tracks the 'were here' count: this measures how many check-ins, mobile device shares, and photo location tags are created at a business. In JetBlue's April earnings report, the airline revealed 7.9% increase in traffic year-over-year, another positive sign for both airlines and the companies that lease planes to major carriers.

China has been a big part of AerCap's business - and of the plane leasing industry overall, for the last decade. In the image above, we see how China Eastern Airlines' ($CEA) pageviews have increased over recent years - another signal of interest for consumer-facing airlines.

Einhorn told investors at the Sohn event that AerCap is the market leader in the plane leasing space - which this chart shows. Einhorn's fund, Greenlight Capital, is up nearly 19% this year, according to recent reports - so now may not be the time to bet against the man who is also one of Wall Street's elite poker players. 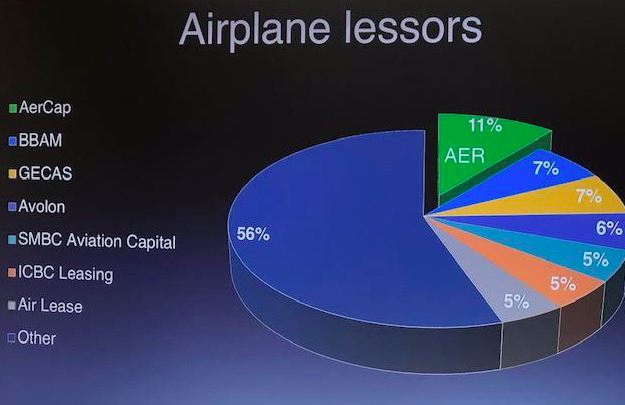