The ambitious, bold and hungry start their week with The Business of Business!
Innovation
2.16.21   9:30 PM Innovation

David Dobrik's Dispo app wants to put the 'social' back in social media, but can it rival Instagram?

Dispo’s air of authenticity makes it an attractive social media alternative without straying too far from the core ingredients— content discovery, connection, and clout.

UPDATE: David Dobrik, YouTube star and Dispo co-founder, stepped down from Dispo's board on March 22 and is parting ways with the company, Axios reports. VC firm Spark Capital announced it was leaving Dispo's board and cutting ties with the company after recent allegations of sexual assault against members of Dobrik's "Vlog Squad" entourage. Several brands and sponsor have also severed ties with Dobrik in light of the news.

Social media has been accelerating at warp speed since Instagram’s launch in 2010. And in the new decade, users want to slow down, or at least pretend to slow down. The millennial obsession with '90s and Y2K nostalgia is a well-documented trend. At the same time, zoomers are pining for a past they never knew. Our collective retrospection is reflected in fashion trends, TV show reboots, early 2000s pop culture blogs, and countless think pieces on "the most nostalgic generation ever." It’s a marketable longing, sure to spawn nostalgia-based companies and products for years to come.

The app's interface mirrors the backside of a Fujifilm QuickSnap camera, meant to be held horizontally. There’s a tiny viewfinder, a flash button, and a shoot button. Once your photos "develop" the next morning at 9am local time, you can sort them into various "film rolls.” You also have the option to get your photos printed and sent to you in three weeks for $1 per image. The filters one might expect from a modern day photography app are notably absent.

Less than a week ago, Dispo launched a new, invite-only test version of its app, which hit TestFlight's 10,000-user limit over the weekend after thousands of downloads in Japan. The company is expected to introduce the new app to the public in the App Store soon, and will release an Android app this year.

Dispo's plan is to become a full-fledged social media platform, focused on shared experience. The new version of the app includes social features like “Shared Rolls,” a collaborative photo album where friends can add pictures and interact with them via likes and comments when they develop the next morning. There are also public shared rolls around various interests, allowing users to interact with new people and discover content.

By adding social and discovery elements to its app, Dispo is giving itself room for growth, avenues to attract creators and influencers, and teeth to compete with Instagram.

The app’s budding success can be partially owed to the clout of its creator, 24-year-old David Dobrik, a top YouTube vlogger with 15.1 million subscribers. Dobrik’s content is characterized by pranks, luxury cars, global travel, and a cast of beautiful, charismatic friends, all of which are internet famous in their own right. Needless to say, Dobrik would not be where he is today without the social media success formula.

The disposable camera aesthetic is nothing new, but Dobrik has managed to make it his own. In 2019, the Los Angeles Times reported that he “keeps a bar cart stocked with Fujifilm QuickSnaps in his Studio City home.” Dobrik even sold $20 disposable cameras on his merch page. Before Dispo’s release, he created an @davidsdisposable Instagram page to share his disposable camera photos. The page, which counts 3.2 million followers at the time of writing, is a continuation of Dobrik’s enviable lifestyle content, featuring candid shots of famous folks like Jack Black and Jimmy Fallon, along with Instagram’s most popular faces. It resembles a PG-rated Cobrasnake for the social media age. 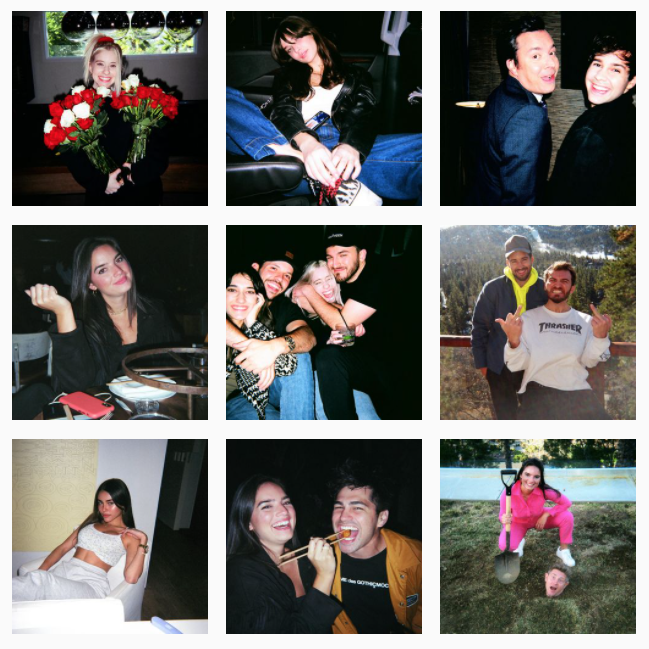 Dobrik is one of many influencers with secondary Instagram accounts for disposable camera shots. You can trace the aesthetic back as far as Instagram’s initial photo filters, with sepia tones and faux light leaks. But the disposable camera comeback has been ramping up in recent years. Urban Outfitters began selling instant polaroid cameras, along with an array of retro accessories. Magazines published celebrities’ disposable camera photo diaries, offering candid peeks into exclusive after parties and fashion week backstage prep. In 2019, Vogue published an article titled, 'The Next Must-Have Accessory? According to Models Like Gigi Hadid and Cindy Bruna, It’s a Disposable Camera.' That same year, the Los Angeles Times spoke to young disposable camera fans for a piece called 'Disposable cameras: A ’90s favorite makes a comeback among millennials and Gen Z.' One 18-year-old said she likes how the photos "look more authentic," like "the photos [her] parents used to take.”

Dispo provides the same vintage photo style that was popularized on Instagram and VSCO. It’s worth mentioning its glaring similarity to Huji Cam, a disposable camera photography app that launched in 2018 and has tens of millions of downloads. But while Huji’s film-like images are available immediately after you point and shoot, and Instagram and VSCO encourage users to manipulate and edit their pictures to perfection, Dispo is thinking beyond aesthetic. Dispo’s photo development wait time and no-filter approach get to the heart of why people love disposable cameras. What they really want, the app asserts, is simplicity.

A big complaint among social media users is the superficial culture these platforms have helped create. And while the "digital detox" is a hot wellness topic, most people are too dependent on the apps to quit them. The new, soon-to-be-public version of Dispo aims to be an image-based social media network that bypasses Instagram’s negative associations, like unrealistic beauty standards and the lack of genuine social engagement that social media once promised. Dispo’s air of authenticity makes it an attractive Instagram alternative without straying too far from the image-sharing giant's core ingredients— content discovery, attractive images, interpersonal connection, and social capital.

Still, an image-sharing platform is, at its core, superficial. Despite Dispo's honorable intent, the consensus might understand the new app as merely an inconvenient version of Instagram. Whether Dispo can meaningfully differentiate itself remains to be seen.