The ambitious, bold and hungry start their week with The Business of Business!
Markets
6.27.18   5:27 PM Markets

According to Facebook Were Here counts, foot traffic at Costco has surpassed that of Walmart's Sam's Club.

There are generally two choices when it comes to membership warehouse shopping: Costco ($COST) or Walmart's Sam's Club ($WMT).

The two retailers, at this point in the game, are strikingly similar. Costco is ranked as the world's second-largest retailer behind only Walmart, and in terms of number of stores, they're just as close: There are 717 Costcos and 754 Sam's Clubs.

But if we're talking momentum, it appears that Costco is on the rise and Sam's Club, after some very public and controversial closings last year, appears to be slowing down. Here's why.

When it comes to followers on Facebook, Sam's Club has had the advantage. With Walmart marketing muscle behind it, Sam's Club has seen more Facebook likes than Costco. However, over the past month, Costo's Facebook follower count is seeing a bit of a rally while Sam's Club appears to be on a slowdown. This could reverse at any moment, of course, but a trend is a trend.

Speaking of trends, one thing any brand wants is media and customers chattering about the brand. After all, there's nothing better than organic mentions or, as digital marketing specialists like to say, "earned" media. In the past month, Costco has seen rapid growth in terms of Facebook members talking about the brand while Sam's Club looks to be lagging behind.

It's no wonder, too. When looking at media mentions of Costco in June, headlines like "The reason why professional chefs love Costco beef" and "Costco Continues to Deliver Impressive Sales Growth", it's clear that perception is king here.

Were Here count reflects foot-traffic trends through Facebook activity that have location data (in other words: almost all of it). That includes everything from simple status updates, to selfies, to manual check-ins. As such, it's a more accurate and interesting way to measure foot traffic over time. As you can see above, Costco Were Here count has been outpacing that of Sam's Club for the better part of a year, with no signs of slowing or reversal.

As you can see, Costco's locations tend to favor urban areas while Sam's Club includes more outposts in rural areas. It's unlikely that this footprint strategy will change any time soon, but given that the two brands have a similar number of locations, the contrast, when mapped, is telling. 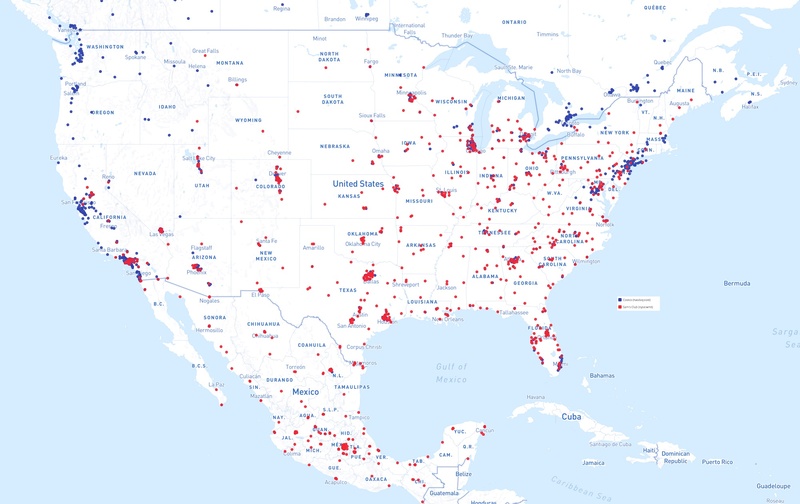