The ambitious, bold and hungry start their week with The Business of Business!
Markets
8.27.18   1:25 PM Markets

CoolSculpting, the body sculpting treatment offered at health spas and other aesthetic medical offices, burns bright for ZELTIQ Inc. and its parent company Allergan, growing from 3200 to 5700 locations in just 2 years.

CoolSculpting, the non-invasive body sculpting technology from Allergan ($AGN), is on an expansion tear as upper-middle class Americans head to aesthetic spas for expensive treatments.

In 2016, the CoolSculpting device and related services could be found at 3,200 health salons. Today, it's available at nearly 5,700 locations, including medical spas, dermatology offices, and aesthetic medical centers.

Founded in March 2005 as Juniper Medical, Inc. — then ZELTIQ in July 2007 — CoolSculpting was the first non-surgical fat reduction technology to be FDA-cleared. According to CoolSculpting, the vacuum-like device works by "freezing and killing fat cells" which are then naturally eliminated by the body.

Allergan, a growing pharmaceutical giant borne out of a series of mergers, officially acquired ZELTIQ for $2.4 billion in April 2017.

A year before that acquisition, CoolSculpting was used in 3,218 places around the world. Today, that number has grown to 5,692 locations, marking an increase of 76% in less than two years. 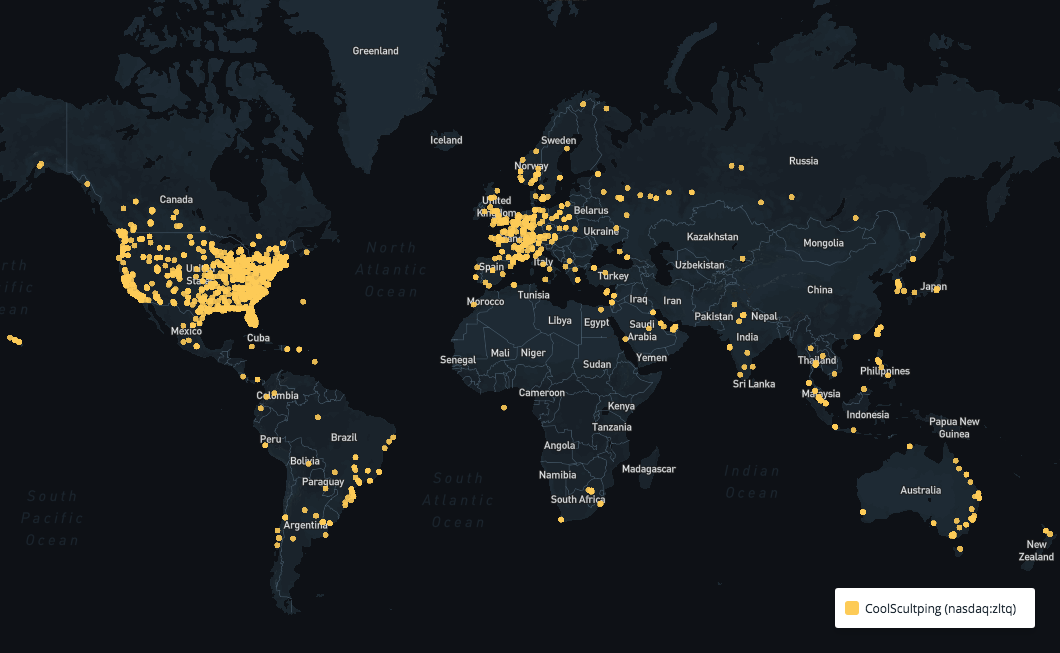 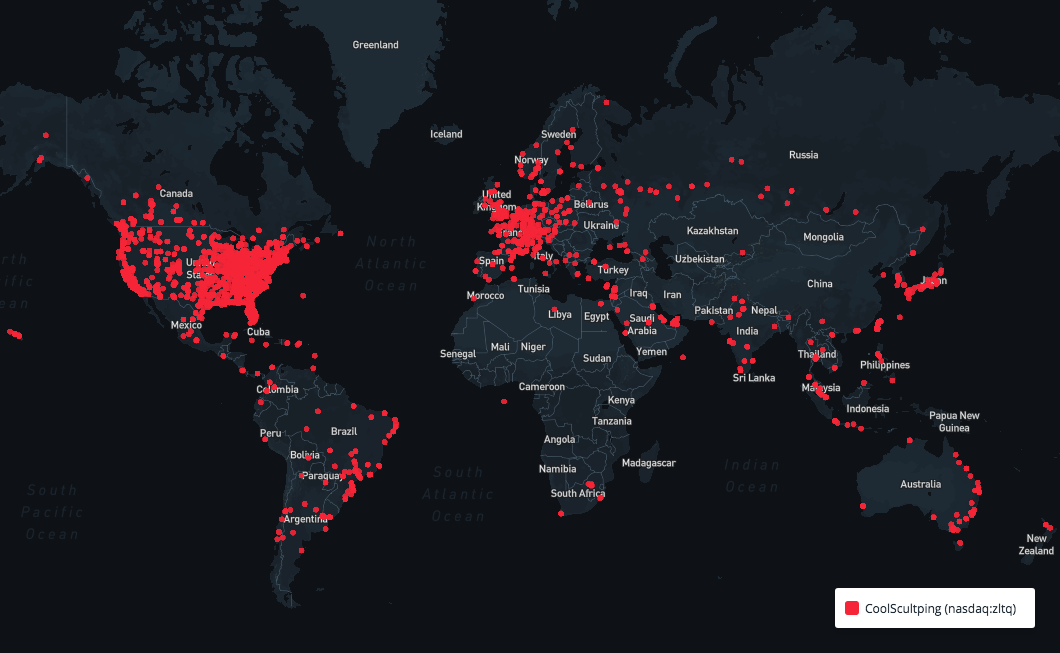 CoolSculpting locations as of today

CoolSculpting treatment locations are most popular in the United States, where there are just under 4,000 across all 50 states. 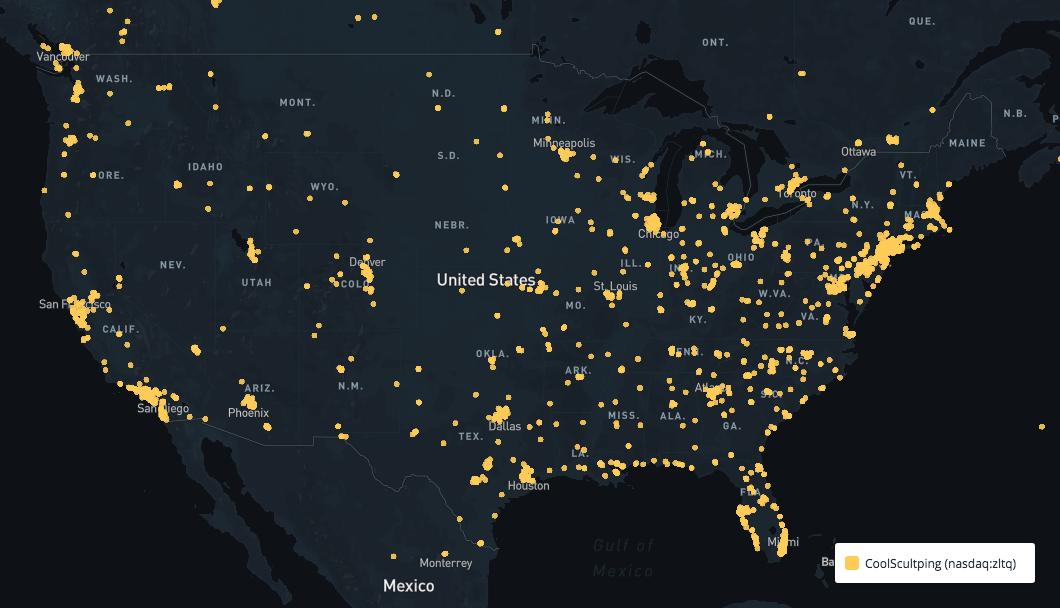 CoolSculpting locations in the U.S. on January 1, 2016 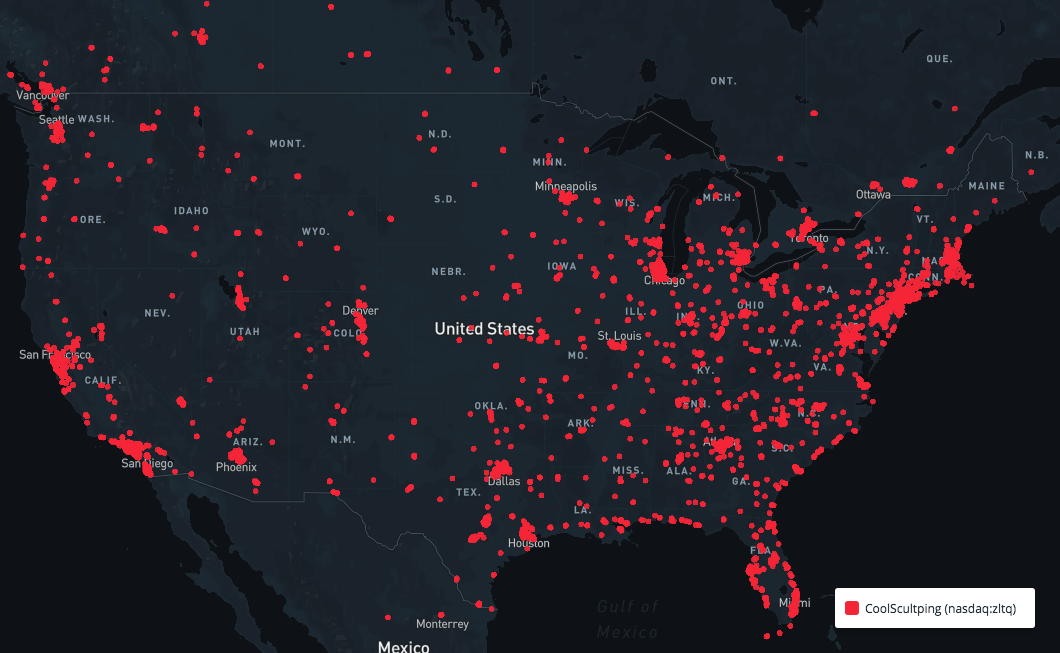 CoolSculpting locations in the U.S. as of today

(Thinknum subscribers can see an interactive map of places that offer CoolSculpting, as well as its locations at the start of 2016)

Not surprisingly, CoolSclupting locations tend to open in higher-income areas where consumers with discretionary incomes tend to spend on high-cost beauty — treatments can cost anywhere from $2,000-$4,000. Out of the 3,428 locations with trackable income data in our database, CoolSculpting spas are most common in zip codes with median incomes above $100,000.

The brand is also active on Twitter, where it's seen a steady rise in followers — close to a 90% increase — over three years.

The same could be said about CoolSculpting's presence on Facebook, most often associated with older demographic.

During the second week of October 2016, CoolSculpting saw a major follower run. This could have been due to a marketing campaign, or because of increased media coverage, such as this E! Online article on October 2.

[For insight on what "Talking About" can mean for brands, click here.]