The ambitious, bold and hungry start their week with The Business of Business!
Markets
2.5.19   3:58 PM Markets

Simon Property Group, the largest shopping mall operator in the US, will be hit the hardest by Charlotte Russe's bankruptcy.

Charlotte Russe filed for chapter 11 bankruptcy, detailing its plan to close "approximately 94 of its store locations" in a press release on Monday.

Those 94 stores, which have yet to be named, will not only hurt local communities, but will also damage the porfolios of several publicly-traded REITs that lease the store space to Charlotte Russe.

In terms of exposure to the closures, Simon Property Group ($SPG) looks to be hit hardest. It currently leases 106 Charlotte Russe locations, which sit inside its vast shopping mall portfolio. General Growth Properties ($GGP) looks to be hurt as well with exposure to 78 stores. 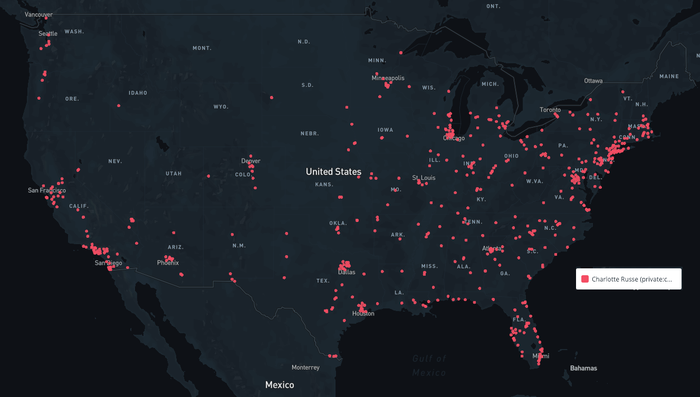 2018-2019 has been hard for the retail space, some calling a spate of closures the "Retail Apocalypse".

As consumers turn to e-commerce and spend less time in malls, retailers are reducing their most expensive elements of overhead: lease costs.

Perhaps the hardest hit by this over time are the REITs that depend on the income. Some are reinventing themselves as we are seeing with Macerich and the Westside Pavilion, but for others with major exposure like Simon Property Group, the closures will sting.

Goldman Sachs is bringing US workers back to the office as early as June 14, and other Wall Street giants aren’t far behind.
Ivan De Luce , Julia Gray
5.6.21   4:00 PM
Markets

Why co-living is booming despite the pandemic

After a year of self-isolation, people are craving human connection, even if that means living with strangers.
Andrew Hirschfeld
5.6.21   12:00 PM
Innovation

Mad Dog Jones sold an NFT for $4.1 million at Phillips last month, a first for the auction house. It’s a sign of the coming wave of NFTs becoming part of mainstream art.
Ivan De Luce
5.5.21   4:00 PM
People
View All