The ambitious, bold and hungry start their week with The Business of Business!
People
12.3.18   7:32 PM People

Conversations about CBS News on Facebook are at an all-time high. But not in a good way.

Usually, you want people talking about your brand. But in this case, a series of scandals has people buzzing about CBS in a not-so good way.

In most cases, an uptick of people talking about your brand on Facebook is a good thing. CBS News ($CBS) mentions on Facebook have spiked to an all-time high of nearly 6 million. That's a lot of conversations about the network.

But unfortunately for CBS News, the timing of those mention spikes coincide with a sexual misconduct scandal involving ex-CBS chairman Les Moonves.

On September 9, 2018, Leslie Moonves stepped down as chairman and CEO of CBS after a 15-year run after Ronan Farrow exposed allegations of Moonves' sexual misconduct. Then, on September 12, 2018, "60 Minutes" exec Jeff Fager released a statement after he was fired over sexual misconduct allegations, following in the footsteps of Charlie Rose and Leslie Moonves. Fager was fired after sending a threatening text message to a CBS News reporter. Within 24 hours, 4.85 million Facebook mentions created a swirl of conversation about the events.

On November 2, The New York Times published an article discussion chaotic executive successions at the network in the shadow of Moonves' and other executives' departures. The article rounds up the sexual misconduct allegations, uncertainty at the network, potential board deals, and details into what CBS was doing to clean up its sketchy workplace culture. 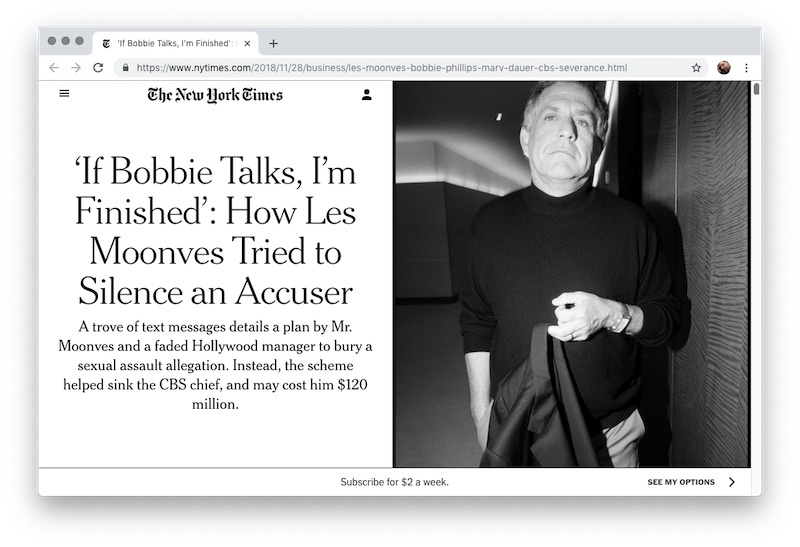 Last week's New York Times article went into shocking detail about Moonves' sexual misconduct, his awful treatment and abuse of female actors, and his potentially losing a $120 million golden parachute. The article sent shockwaves throughout the news and media spheres, and as a result CBS News saw nearly 6 million mentions on the world's largest social network.

Whoever said "any news is good news" clearly didn't consider the massive chatter chamber that Facebook would become.