The ambitious, bold and hungry start their week with The Business of Business!
Crypto
2.8.22   12:23 PM Crypto

The former director of operations for ENS, responsible for .eth domains, was fired after a 2016 tweet surfaced in which he said homosexuality is “evil,” contraception is “perversion” and transgender people don't "exist."

While most of social media remains mired in squabbles over Spotify and Joe Rogan, an equally intense “cancel culture” drama is unfolding in the crypto world.

Brantly Millegan, an influential figure in the Web3/decentralization/crypto sphere, was fired from his role as director of operations for the parent organization of Ethereum Name Service after a tweet surfaced over the weekend revealing his shocking religious convictions. ENS helps cryptocurrency holders consolidate their identities and wallet addresses into universal usernames for Web3, formatted as “username.eth.” 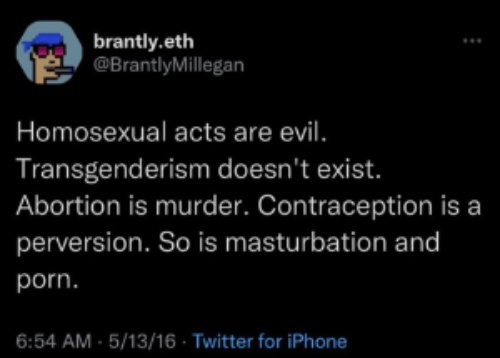 Individually, any of those sentences would be enough to raise hackles on social media. All together, it was a bit too much even for crypto’s notoriously pro-free-speech user base to take — especially after Millegan declined to walk any of his comments back. Instead, he doubled-down on them during a Twitter Spaces this weekend and in follow-up tweets.

Millegan, who prominently describes himself as “Catholic,” quipped on Saturday: “hey looks like I’ve got my first mob. Nice to see some ppl finally read the first word of my bio.”

After another user suggested that Millegan may have “missed a few sections” of the Bible, “like the ones on loving others,” Millegan replied: “hey, not really interested in debating theology right now, but what i believe is the mainstream traditional Christian positions held by the world’s largest religion. It’s not exactly fringe”.

Some crypto enthusiasts swiftly labeled Millegan’s tweet as “bigoted” and saw him as against the inclusivity mission of Web3, an idealistic future version of the internet that would be largely decentralized and operating through blockchains. “If you love everyone you should apologize to the people you called evil, non-existent, and perverse,” tweeted Hayden Adams, the founder of crypto exchange Uniswap.

Others appeared to struggle with the idea of “canceling” Millegan for espousing offensive views. A major tenant of the Web3 movement is trying to be “censorship resistant” and reducing barriers to participation that might exist in other aspects of the economy, such as traditional publishing, entertainment, banking and finance. Crypto-based collectives, known as DAOs, for instance operate through stakeholder votes facilitated through the blockchain rather than by a central authority.

Still, the cancelers seem to be winning — and showcasing the unique ways those mechanisms can work in the crypto sphere in real time. That’s because ENS is governed by a DAO, which has issued millions of $ENS tokens currently valued at around $22 each that allow users to vote on proposals associated with the organization. Core contributors and early adopters, including Millegan, received a heavy share of the tokens through airdrops and other special allocations.

Although Millegan remains the delegate with the most voting power in the DAO, his influence is suddenly waning. Some members of the DAO have urged their peers to re-delegate their tokens, causing Millegan’s voting power to drop from 429,000 tokens on Feb. 5 to just over 375,000 at time of publishing.

DAO members also attempted to organize a vote to oust Millegan from his role as director of operations, but were preempted when True Names Ltd, the Singaporean-incorporated nonprofit that oversees ENS, terminated him. Millegan also lost his role as a community steward after a simple majority vote of the other stewards came down against him. Millegan remains a director of the ENS Foundation, the legal entity which  oversees the DAO, though community members will likely vote on this matter in the coming days.

One DAO member who seemed to be wrestling with whether to shift delegate power against Millegan posted on a discussion board: “TBH, I don’t have that much of an issue with Brantly’s beliefs. Sure, they are quite wildly against what I stand for, but the world is a large place and it’s important that a wide variety of perspectives exist and are heard.

What is troubling is that Brantly doesn’t seem to recognize the new responsibility that comes with his position as ENS gains more importance.”

Millegan did not reply to our request for comment on the matter. In a statement posted to a Discord channel, Millegan said "I want to make it clear that I've never exlcuded anyone from ENS or my work (or even my personal life) because of who they are or what they believe...Yes, I believe Catholic doctrine (not a secret), and I'm not changing that, and I don't think it's practical or moral for the web3 industry to exclude the many traditional-minded Christians, Muslims, and Jews and others who agree with me. I'm obviously aware many people disagree with me and that's fine. I believe in tolerance with a wide net, I live that out, and I ask others to give me and others the same."