The ambitious, bold and hungry start their week with The Business of Business!
Markets
11.30.18   3:37 PM Markets

For whatever reason — millennial apathy or a paucity of sporting events — Buffalo Wild Wings' social numbers don't look so hot.

Buffalo Wild Wings executives blamed the poor numbers on everything from the lack of compelling sporting events to a lack of interest from millennials. But whatever the reason, social media trends indicate a growing disinterest in the brand.

Where are the Wings? 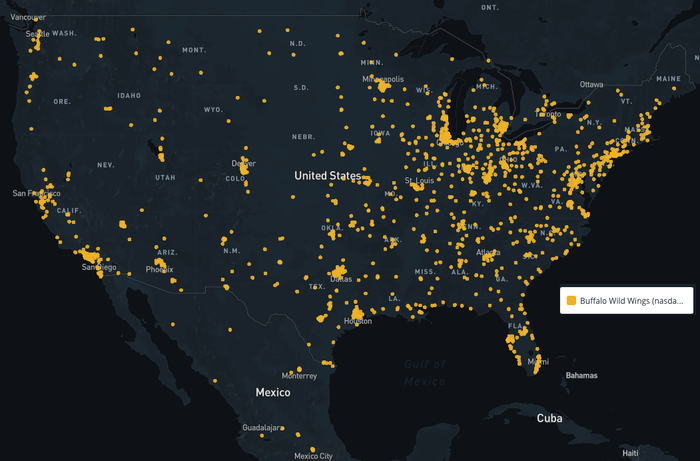 [An interactive map for subscribers can be found here.]

Buffalo Wild Wings is a franchise — it owns less than half of its more than 1,200 locations. In 2017, it sold several dozen restaurants off to franchisees in order to improve margins. Those locations were deemed by the company's CFO as places where it simply didn't have enough locations in the area to make an impact.

"We view these areas as better suited to be run by our franchisees or others with greater local scale and resources,” Alexander Ware, Buffalo Wild Wings’ CFO, said during a 2017 earnings call. “These are markets that we will evaluate selling as part of our first optimization effort.”

Buffalo Wild Wings' retail footprint looks an awful lot like a fast food chain, with a focus on markets that tend to frequent such establishments, such as Houston, TX (the fast-food capital of America) and midwest, sports/wings/beer-friendly cities like Cincinnati and Indianapolis.

Buffalo Wild Wings isn't doing any better when it comes to social media. Its Facebook Followers have been declining since October 2017, echoing its sales struggles.

In October, 2017, the restaurant's Facebook page registered 12.6 million likes. But today, that number has slumped to 12.5 million. Declining Facebook LIkes is a particularly useful digital brand assessment metric in that in order for Facebook likes to decline, users must actively click to remove the brand from their Facebook feeds. In other words, it's a representation of active consumer disinterest in a brand.

Facebook "Were Here" count describes the number of status updates, selfies, and photos posted to the social network from a business's location. Given Facebook's ubiquity and Americans' love for the selfie, the "Were Here" count is a useful indicator to understand foot traffic trends. In the case of Buffalo Wild Wings, "Were Here" count growth has been declining over time.

In fact, the were here growth arc show a slowdown of "Were Here" growth from a high of more than 72% in 2016 to just around 10% today, when compared year-over-year.

In other words, people are increasingly going elsewhere. Or simply staying home.