Many tweets and a lawsuit later, Tesla employees are getting the short end of the stick.

As Tesla ($TSLA) co-founder and CEO Elon Musk is busy revealing plans for a new factory in Berlin and surpassing Warren Buffet in net worth, his employees are back to work and getting sick. According to an internal leak obtained by Electrek, more than 130 Tesla employees at a California factory have tested positive for the coronavirus. And those 130 are only a fraction of those “affected.” Tesla data shows that over 1,550 employees were exposed to the virus, and it is unclear if the majority of them have been tested. That’s over 15% of those who work at the Fremont-based factory.

Musk called for Tesla to restart production in its Fremont factory on May 11 — a week earlier than county officials agreed to a reopening. Two days prior to Musk’s order to open factory doors, Tesla released a statement as well as a Return to Work playbook that detailed the company’s efforts to “ensure employee safety,” including video training, posters to remind workers about hand-washing, and encouraging daily stretching, among other precautions. Musk also shared his intent to move Tesla headquarters out of California entirely — perhaps somewhere with fewer restrictions.

Frankly, this is the final straw. Tesla will now move its HQ and future programs to Texas/Nevada immediately. If we even retain Fremont manufacturing activity at all, it will be dependen on how Tesla is treated in the future. Tesla is the last carmaker left in CA.

“We were working on a lot of policies and procedures to help operate that plant and quite frankly, I think Tesla did a pretty good job, and that’s why I had it to the point where on May 18, Tesla would have opened,” Scott Haggerty, the county official for the Alameda County district in which the factory is located, told The New York Times. “I know Elon knew that. But he wanted it this week.”

As news spreads of, well, the spread at Tesla Fremont, the company’s Indeed profile reviews seem to be taking note. As of July, overall ratings are on the decline.

Musk’s frustrations seem to be rooted in discrepancies between state and local orders. While governor Gavin Newsom gave manufacturers the green light to resume operations on May 9, local officials still held on to tighter restrictions. There’s that, and the fact that the Fremont factory produces the majority of Tesla vehicles, effectively limiting the company’s ability to bring in revenue with stay-at-home orders in place, The New York Times reports.

Instead of continuing to work with local officials aiming to curb the spread of the coronavirus, Musk took to Twitter to air his grievances about COVID-related restrictions and heroically ask that he is the only person arrested if trouble ensues at Fremont’s grand reopening.

Tesla is restarting production today against Alameda County rules. I will be on the line with everyone else. If anyone is arrested, I ask that it only be me.

Although Tesla’s outbreak is not quite on the same scale as those we’re seeing in meatpacking plants and other large manufacturing facilities, there’s still much to be said about the company’s course of action since its internal info was leaked.

Fremont CBS reports that Laurie Shelby, Tesla’s vice president of environmental, safety, and health, sent an email to employees on Wednesday night claiming “more than 99.99%” of occurrences of the virus were not transmitted in a Tesla workplace. Even so, some workers refuse to return to the factory. Some community members have even scheduled a (hopefully social-distanced) protest at Fremont city hall on Friday.

In a time when leadership and compassion are more crucial than ever, Musk will have to grapple with the question many CEOs and senior leaders now face: Is raking in the big bucks more important than employee well-being? That remains to be seen — Musk hasn’t yet spoken up on Twitter, which might be considered out of character for him if his account wasn’t hacked on Wednesday, July 15. 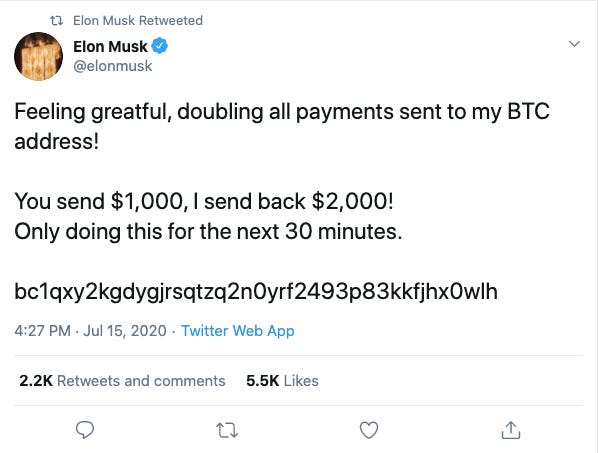 Musk, along with former President Barack Obama, former Vice President and presumptive Democratic nominee Joe Biden, Bill Gates, and several other prominent names saw their Twitter accounts fall victim to a Bitcoin scam. Though Twitter quickly removed the messages asking followers to send Bitcoin and have their contributions doubled, the bizarre event has left many, including Musk, to wonder what else could happen in the face of such a huge security lapse.

Now, he’s left to ponder that question as well, and cope with a falling stock price because of his antics.