The rise of NFTs has made some artists incredibly rich incredibly fast. But the environmental cost of producing them has created a rift among artists online as some cash in while others battle with thieves and moral dilemmas.

RJ Palmer has been up all night.

Actually, he’s been up for several nights, several times over the last several weeks facing what he sees as an impossible decision.

“It’s almost unfair to be presented with this choice of 'set you up for life' money if you could only just forsake your morals,” Palmer said. “Like all your dreams could come true if you just do a little ecological destruction.”

Palmer is a freelance artist perhaps best known for his “Realistic Pokémon” series, which has gone viral multiple times and helped him land a job working on the 2019 film Detective Pikachu. With over 85,000 Twitter followers, Palmer’s work is incredibly popular and gets shared frequently. But yesterday, Palmer went viral for something different. Someone had turned one of his tweets with original artwork into an NFT, or non-fungible token, without his permission. 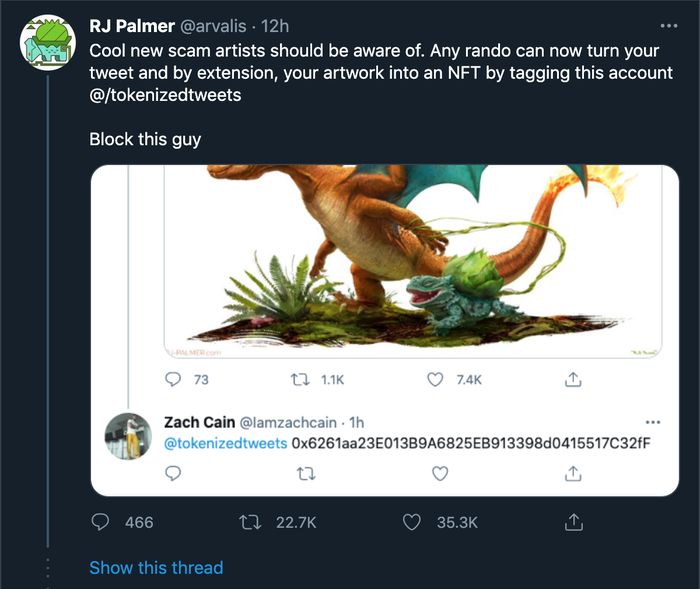 Twitter user @Iamzachcain replied to one of Palmer’s posts, which contained original artwork celebrating the 25th anniversary of Pokémon, and tagged the Twitter account @TokenizedTweets along with a cryptocurrency wallet address. The tweet was then turned into an NFT, which was owned and could be traded by the replier with no credit or payment to Palmer, the artist.

Palmer is one of many artists currently caught up in the NFT craze, which has taken the cryptocurrency world by storm. NFTs operate on blockchain similarly to cryptocurrencies like Bitcoin, but each NFT is a unique item in the blockchain. They are digital assets — like a piece of art, a video game, or even a tweet — that have a specific owner, and are recognized as unique objects even if they are identical to another NFT.

It’s hard to pinpoint exactly when mainstream interest in NFTs began, but celebrities have latched onto their recent popularity. Lindsay Lohan, Paris Hilton, William Shatner and others have all profited off of creating and selling NFTs, and companies like Taco Bell are also launching their own NFTs.

Still, NFTs are not driven purely by celebrities. Artists across the internet have started minting and selling their work as NFTs and have enjoyed enormous windfalls. Artist Mike Winklemann, also known as Beeple, has minted NFTs that have sold for millions of dollars, and even sold some of his work in a viral auction organized by Christie’s. Artist BossLogic minted an NFT so sought after it crashed Openseas, a cryptocurrency exchange platform. Others have created entire series to be sold as NFTs, such as Raf Grassetti’s “CryptoHistory” series, which consists of digital, marble-like busts of figures like Mark Cuban and Elon Musk.

“I had my first proper introduction to [NFTs] last summer when an artist I follow started [making them],” Palmer said. “I thought it was patently absurd that anyone would buy a jpeg for $1100 then. Little did I know what was coming.”

Though NFTs offer artists an opportunity to potentially see enormous returns on their work, minting artwork has become a point of contention among artists online, with many chastising those who seek individual returns over industry-wide reform. “I get why illustrators are selling NFTs directly to the wealthy. There’s higher pay and appreciation for the work they make,” illustrator and game designer Chris Kindred wrote on Twitter. “But it also tells us that these same artists are okay with just getting theirs in the short term instead of pushing for better conditions for all of us.”

Proponents of NFTs argue that the format is no different from the way traditional art galleries work. “Art has been like that in the real world,” said investor and blogger Matty Soudagar in a recent interview with Youtuber Julian Hosp. “You can invest in single pieces, which are hand painted, or you can also buy prints. Artists will do a set of 1,000 prints that they print and sign, and it becomes a collectible. You as a collector and the artist are now team members.”

However, Soudagar’s art gallery comparison struggles to hold water when services like TokenizedTweets enable anyone to claim someone else’s work as an NFT without consent from the creator. The service first rose to prominence on Saturday when Mark Cuban used it to tokenize one of his own tweets, which contained an image from a Dallas Mavericks game. TokenizedTweets is a service provided by Ethereum platform Polygon, formerly known as Matic. Polygon did not respond to a request for comment by the time this story was published. 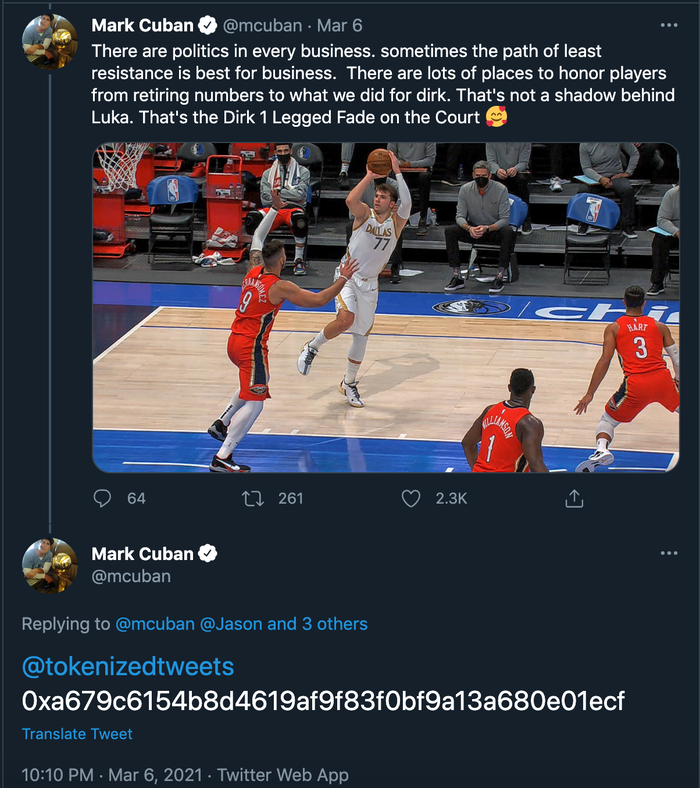 Since then, it’s been used by a number of Twitter users to tokenize other users’ tweets without permission. Even actor William Shatner, who himself minted several NFTs last year, had an exchange with the account when someone attempted to tokenize one of his tweets. Shatner received a response from TokenizedTweets which stated that the service has a takedown form on its site, and that users can block the account if they do not want their tweets tokenized.

Use of TokenizedTweets has increased since Cuban’s tweet this past weekend. Users like @Iamzachcain have used the service to tokenize posts from multiple users and artists including Palmer and Shatner, and have landed themselves on “ban lists” circulated by artists on Twitter to protect their work from being tokenized. @Iamzachcain declined to comment for this story. However, in a tweet shortly after the publishing of this story, they claimed to be an investor in Polygon, the company that operates TokenizedTweets. 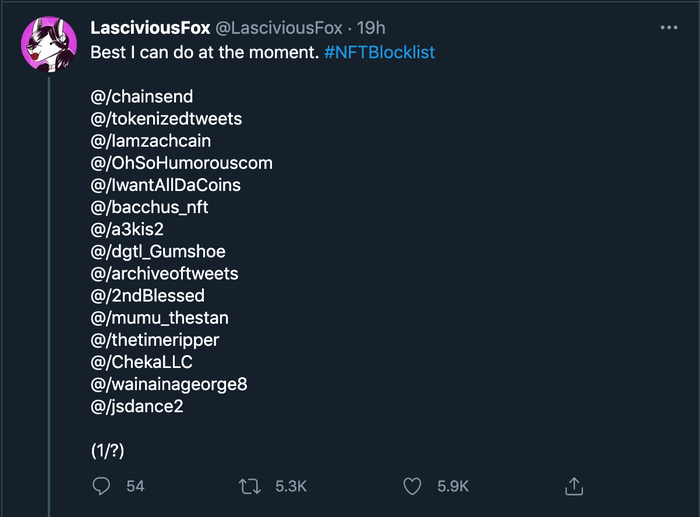 So far, Twitter hasn’t made any effort to block accounts like TokenizedTweets, and it seems unlikely that they will given that CEO Jack Dorsey has himself gotten in on NFTs, auctioning off the first-ever tweet for $2.5 million and donating the proceeds to charity. Palmer is not optimistic that platforms will take steps to help artists protect their work. “If they can’t get rid of the nazis [on their platform], why would they spend time restricting niche NFT scams?”

Andrew Steinwold, founder of the NFT-focused investment firm Sfermion, says that while there are verification and copyright measures available on NFT exchange platforms, they aren’t widely used. Steinwold also said it’s difficult for platforms like Twitter to enforce rules around NFTs, and that it's better to have issues with ownership and copyright arise during the current NFT craze than years in the future.

“Right now it’s the wild west, and it’s kind of good that we’re having this bad behavior today versus ten years from now when the stakes are way, way higher” Steinwold said. “Hopefully we can solve this issue somehow. I don’t know if it’s going to be a tech-oriented solution, but if people figure out some sort of way to verify stuff, then we can implement that across the board.”

Palmer started paying more attention to NFTs as a potential source of income in early February. “Once I found out about Beeple’s windfall and BossLogic after him, I became extremely interested,” he said. “Of course, then comes the part where you hear about the environmental impact and it really pumps the brakes on you. Ever since then it’s been constant stress as I read every article that comes out from both sides of the issue. Nothing has gotten easier.”

This is the tradeoff of NFTs: the incredibly high energy cost associated with them. Just like with cryptocurrencies, creating an NFT requires an incredible amount of electricity. According to analysis by the University of Cambridge, Bitcoin consumes more energy than all of Argentina or Ukraine, totaling 128.84 terawatt-hours per year.

This, along with many online artists being underpaid for their work, is what’s keeping Palmer awake at night — the fear that he may miss a once-in-a-lifetime opportunity to achieve financial independence if he sticks to his environmentalist principles.

“I want to make the right decision; the decision I’ll be able to look back on and be proud of,” he said. “I also feel like I’m wasting away throwing all my best ideas and artwork into corporate vaults. The dream for many artists (mine included) is financial independence to pursue personal work free from NDA hell.”

Still, Palmer doesn’t blame those who choose to get involved with NFTs. “I want to be clear that my issue is strictly with the environmentally destructive tech, not the artists that are partaking. Everyone’s moral calculus is different and it can be hard to even have the right information.”

But for Steinwold, whose firm is tied to the success of cryptocurrencies and NFTs, that moral dilemma doesn’t exist. “I think that’s pretty comical,” he said. “Are these people going to work every day on a horse and buggy? If they have a computer, it contains rare earth minerals that are mined from China, and then it uses electricity from the power plant down the street.”

Steinwold blames the negative perception of crypto’s energy usage on the fact that the output required to generate cryptocurrency can be measured very precisely. “It’s extremely measurable because there is a direct profit that can be made off of the input and outputs,” he said. “But if we just measured the cost of running just the banking system, that far exceeds the cost of managing cryptocurrency networks. And that’s just one example. I don't see how the argument has a good standing. Just by being a human that consumes resources, you can always argue that, ‘Ok, it’s not ethical that we’re consuming these resources.’”

There have been glimpses of more eco-friendly crypto mining on the horizon. Some exchanges have started using solar energy to power their mining operations, and Steinwold claims that Ethereum’s move to a proof of stake system will make many computers currently mining Ethereum obsolete, helping reduce the overall footprint of cryptocurrency.

For Palmer, the potential for environmentally friendly NFTs eases his concerns somewhat, but the dilemma still remains. “I’ve definitely landed in the camp of wait and see,” he said. “If the promise of less environmentally damaging blockchains are real, then maybe it won’t be such a bad thing later on.”