With an eye on Emmy awards, Apple is on a fresh hiring spree for its TV+ service.

Last year, Apple ($AAPL) opened a new Hollywood-adjacent Culver City facility to house its new Apple TV+ studios and teams. Hiring at the new location took off as the company prepared for the then-new streaming service's launch, and then things went a bit quiet as the company worked to acquire subscribers and get the word out about Apple TV+.

Despite a relatively ho-hum launch for Apple TV+, Apple appears determined to make the service an entertainment powerhouse that can take on the likes of Netflix. Just last month, it hired Richard Plepler, the ex-HBO head who saw the creation of Game of Thrones and made that network a streaming giant.

Plepler's arrival appears to have triggered a hiring spree at Apple TV+: immediately following his contract signing, Apple went on a hiring spree for the service, posting 232 individual titles across 455 individual postings with the term "Apple TV" in their titles alone.

The new positions span the gamut of a studio in a growth phase, including finance, marketing, and casting. Some of the more recent postings are listed below by the dates they were posted.

Not surprisingly, the vast majority of the new positions are located at the Culver City studio facility followed by Apple's Cupertino headquarters.

One of the more recent job listings points to a future in which Apple will make Emmy award runs. When HBO — and Netflix after it — got its first Emmy nod, it helped legitimize the network as a true player in the space. There is little doubt that Apple has its eye on a future in which it, too, rakes in the awards. 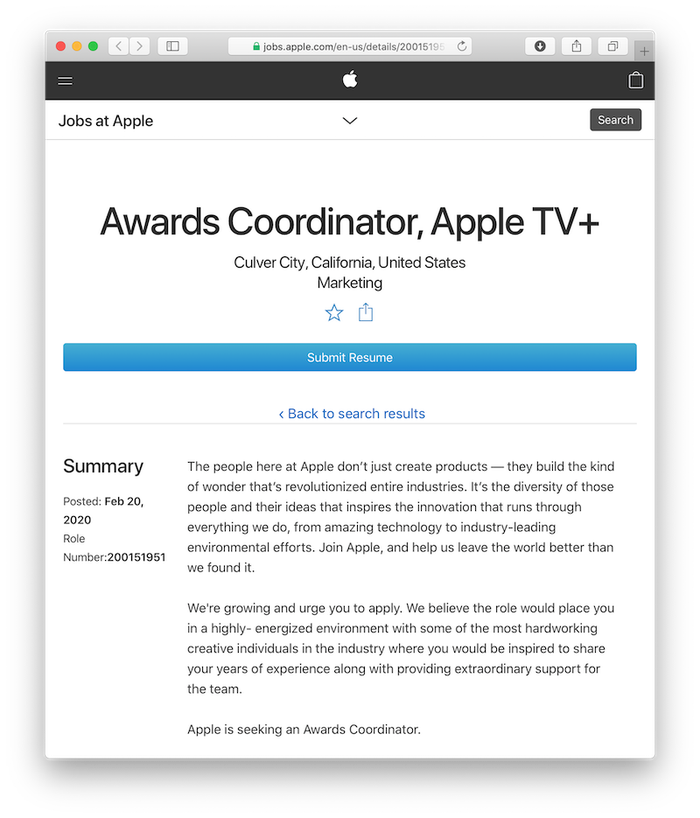 The new position seeks an individual who can help develop the network's "Emmy and other awards For Your Consideration campaigns" as well as book travel and accommodations for talent during Emmy campaigns.