The ambitious, bold and hungry start their week with The Business of Business!
Markets
10.3.18   1:57 PM Markets

At least one-third of all American schools have a JUUL e-cigarette retailer nearby, data shows

Thinknum data shows that at least a third of all U.S. public schools are within one mile of a place where its students could find JUULs.

As the U.S. government continues its investigation of how e-cigarette companies such as JUUL ($PRIVATE:JUUL) market to minors, Thinknum data shows that at least a third of all U.S. public schools are within one mile of a place where such products are sold.

We looked at location data for 98,269 public schools across all 50 states, and 35,702 of them — more than a third of all schools — have at least one place where e-cigarette products are sold. In terms of a half mile radius from these schools, which is theoretically a short walk from campus, 16% of public schools have a nearby e-cigarette seller.

Here's the percentage breakdown by state of how many schools have at least one JUUL seller nearby:

The percentage is a starting point for the true number of e-cigarette retailers near schools. Given that there are other e-cigarette brands sold in America, distributors who have unlisted/difficult to scrape coordinates, and other factors that could expose children and teens to e-cigarettes close to school grounds, it is possible that there is a greater percentage of schools who have an e-cigarette distributor nearby.

Here is where JUUL stores — those who list their locations on the JUUL website — appear as of October 3. 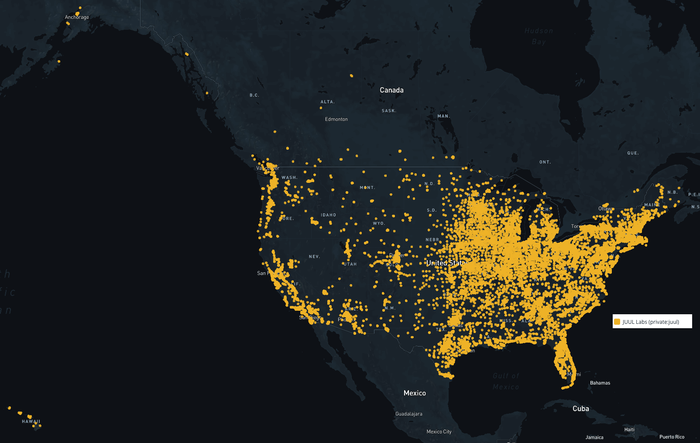 (Click the image for a larger version of the map)

Recently, the Federal Drug Administration launched an investigation into JUUL and other e-cigarette manufacturers, going so far as to raid JUUL's headquarters yesterday. The FDA hinted at adding federal requirements to these manufacturers in the near future, such as changing how they market themselves, removing flavored products — ones that taste like a mango or creme brulee — or halting the distribution of these products to retailers who sell to kids.

On a granular level, each state has different laws when it comes to tobacco. In Oregon, a person must be 21-years-old to purchase tobacco. In Iowa, where 72% of schools are within one mile of a JUUL retailer, an 18-year-old person — a high school senior, for example — can buy and smoke tobacco in any form.

Having retailers near school grounds exposes children to advertising by these e-cigarette retailers, according to the tobacco control non-profit the Truth Initiative. Recent research shows that more than 96 percent of e-cigarette marketing goes into retail marketing, which includes advertisements shown inside and facing outside stores in windows and product displays.

Not all retailers are created equal, however; some JUUL retailers are smoke shops that prevent children and teenagers from entering, while others are convenience stores such as 7-Eleven ($TYO:3380) that are open to anyone. These are all included in the dataset for JUUL retailers, one that will be updated as new stores are populated into the database.