The ambitious, bold and hungry start their week with The Business of Business!
Markets
8.14.18   1:32 PM Markets

ALDI already has 3x the number of stores as both Whole Foods and Trader Joe's, and plans to open 2,500 stores by the end of 2022. How does that stack up against its competitors?

ALDI ($PRIVATE:PRIV_ALDI) recently announced that it will invest more than $5 billion to remodel and expand its number of stores to 2,500 by the end of 2022. The plan also includes the addition of more fresh, organic and easy-to-prepare food options to its bounty of private label, low-cost products. If this all sounds like ALDI is aiming directly for the market that Amazon's Whole Foods ($AMZN) and Trader Joe's ($PRIVATE:TRADERJOES) have dominated, that'd be because that's exactly what the chain appears to be doing. In fact, according to today's numbers, ALDI is already the king among its direct grocery store competitors.

German-based ALDI is winning on the price front too, by offering house-brand products at discount. For example, if a parent were to shop for diapers at ALDI, they would be reaching for Little Journeys, a brand made up by ALDI, rather than Pampers and Huggies. According to the company, over 90-percent of its products are ALDI exclusive brands.

Both Whole Foods Market and Trader Joe's employ similar white-label strategies when it comes to pricing. Fun fact: Trader Joe's is owned by ALDI Nord, a company that is financially and legally separate from ALDI Süd, which owns all of the United States ALDI supermarkets. A falling out between founding brothers Karl and Theo Albrecht over selling cigarettes in stores led to that split.

Now that the table is set for this party of three private label, low-cost grocery stores, here is how much ALDI is leading its competitors in the United States when our database last fetched store numbers in March 2018 (the full dataset with locations can be seen here): 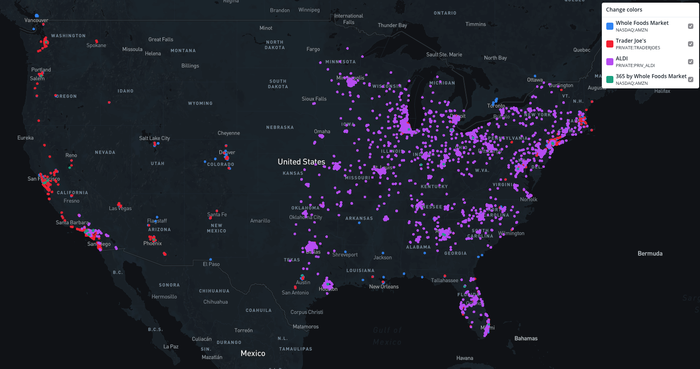 (Not pictured: Four Whole Foods stores in Hawaii. Apologies to our friends in the 50th state).

Not even a combination of all the Trader Joe's and Whole Foods comes close to ALDI's footprint in the United States. We would also include LIDL, ALDI's national rival that recently came across the pond, but as we reported previously, it has yet to make a dent even in Whole Foods' portfolio.

So, if ALDI is already running away in the race against its direct competitors, what exactly is it chasing when it plans to open over 2,500 stores in four years' time?

Should ALDI reach that 2,500 brick-and-mortar location mark, it would rank it among the regular grocery store giants. Think Kroger. Or Ahold Delhaize, which owns Stop & Shop and Food Lion. Or Albertsons LLC, which owns Safeway, Shaw's and Star Market among other brands.

Of course, all of those supermarkets have far fewer private-brand products, which is both a benefit (an Oreo package is more recognizable than a package of "chocolate sandwich cookies") and a drawback (less control of pricing).

As you can see, ALDI is already threatening "regular" grocery stores. Should its expansion plans come to fruition with the help of their new affordable products, only Walmart, which boasts over 3,500 retail locations, stands in its way.

Thinknum subscribers can take a deep dive into the data to see what grocery store rules over specific regions or cities in the United States here.