The ambitious, bold and hungry start their week with The Business of Business!
Innovation
10.15.18   2:13 PM Innovation

Airbnb's growth across the web threatens Marriott and the hotel industry

Marriott International may claim the largest hotel chain in the world, but with a killer app and growing website traffic, Airbnb is coming after the entire industry.

Although it constantly battles with the cities it is in, Airbnb ($PRIVATE:AIRBNB) is changing the hospitality industry. What was once a solid platform for homesharing — or couch surfing — is now a burgeoning threat to legacy players that travellers relied on since the early 1900’s such as Marriott International ($MAR).

Even though at a $48 billion market capitalization Marriott reigns in the world of bellhops and room service, Morningstar’s estimate of Airbnb’s $53 billion to $65 billion valuation effectively dwarfs everything else in the hospitality industry.

When looking at Marriott International should have little to fret over. The merger between it and Starwood Hotels in 2016 turned the Bethesda, Maryland company into the largest hotelier in the world, and by the middle of last year,  “one in seven hotels in North America, and more than one in 14 worldwide, [were] controlled by Marriott,” according to Fortune. Today, the company has 6,800 properties across six continents. 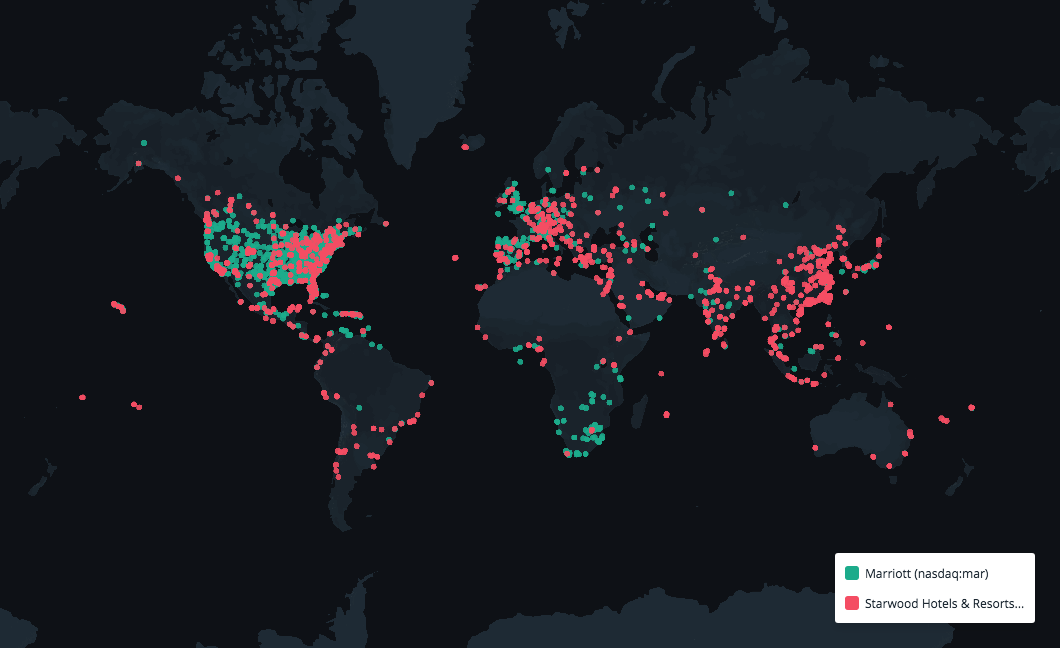 The merger didn’t just make it the dominant player in the hotel space, but also created the largest hotel rewards program in the world. Between the time shortly after the merger and early October, the ranking of Marriott Rewards, the app used to keep track of and redeem rewards across the company’s line-up of properties, was cut down by nearly three-quarters.

But it’s also been positively diving for Airbnb, and while Marriott can celebrate its newly one place at around the 2000th most popular app according to Facebook logins, Airbnb sits cozy in the low double digits.

Airbnb’s success has led to an awkward imitation game: In May 2017, the company unveiled a tourism product similar to Airbnb’s “Experiences”, wherein people group up for microbrews or specialty coffee or all else that falls within the Squarespace-esque world of Airbnb. “The company won't be renting out private homes anytime soon,” Business Insider assured. About a year later, it did precisely that.

And although app logins are up, website visits are not, falling rather precipitously since 2016, even at the supposedly safe Ritz Carlton.

Meanwhile, despite some peaks and valleys, Airbnb is looking like a solid investment to have made in 2009. Year-over-year, its traffic remains steady at over 3.75 million monthly unique visitors since the Spring of 2017, much thanks to its expansion outside of the U.S. and its addition of its experiences.

That viewership is nothing short of impressive; not only does Airbnb's September monthly unique visitor count double that of Marriott's main website, but it is more than all of Marriott's websites tracked on the Thinknum database combined.

Airbnb may still have to fight plenty of regulation battles with new cities, such as Washington D.C., declaring war on it regularly. For now, it remains a worthy opponent to the hotel industry, and a company to watch as the world’s largest hotel chain grows closer to a century in operation.