The ambitious, bold and hungry start their week with The Business of Business!
Innovation
6.24.19   4:01 PM Innovation

Airbnb hiring in China has remained steady over the past year, despite the threat of a trade war and the growth of homegrown competitors such as Xiaozhu.com.

Airbnb ($PRIVATE:AIRBNB) continues to disrupt the hotel and general leisure industry on a global scale, especially when it comes to breaking through the competitive domestic market in China. Recently, China Daily reporter Fan Feifei wrote about the State Information Center projecting that the rental and homestay market will reach 50 billion yuan by 2020. She also got this quote from An Li, the Vice President of Airbnb China, which tells a lot about how Airbnb views this market:

"The vacation rental services are still nascent. China is one of the most important markets for Airbnb and we have seen the Chinese government holds a positive attitude toward the sharing economy."

So then, it's no surprise that Airbnb is continuing to hire up in China.

A year ago, we saw Airbnb job openings push past the 50 mark in China. Today, it's continued hiring expansion in the country, hitting almost 60 job openings in May before settling back down under 50.

Right now, Airbnb is hiring in China more than any other country outside of the United States, where it is headquartered.

Towards the beginning of its hiring trend, Airbnb was mainly looking for Engineers. However, since then, it's shifted towards Operations and, in recent months, to Community Support.

These positions range from crisis support team members to partnership coordinators. There is also an opening for a "Loyalty Coordinator" which, taken out of context, is a pretty interesting title. But upon closer inspection, it's a job that involves Airbnb's "Love Gifting" service, which, according to Love Team founder Jesi Owen's LinkedIn profile, is tasked with "VIP Services, the Gifting Program, & Special Event Service Operations." 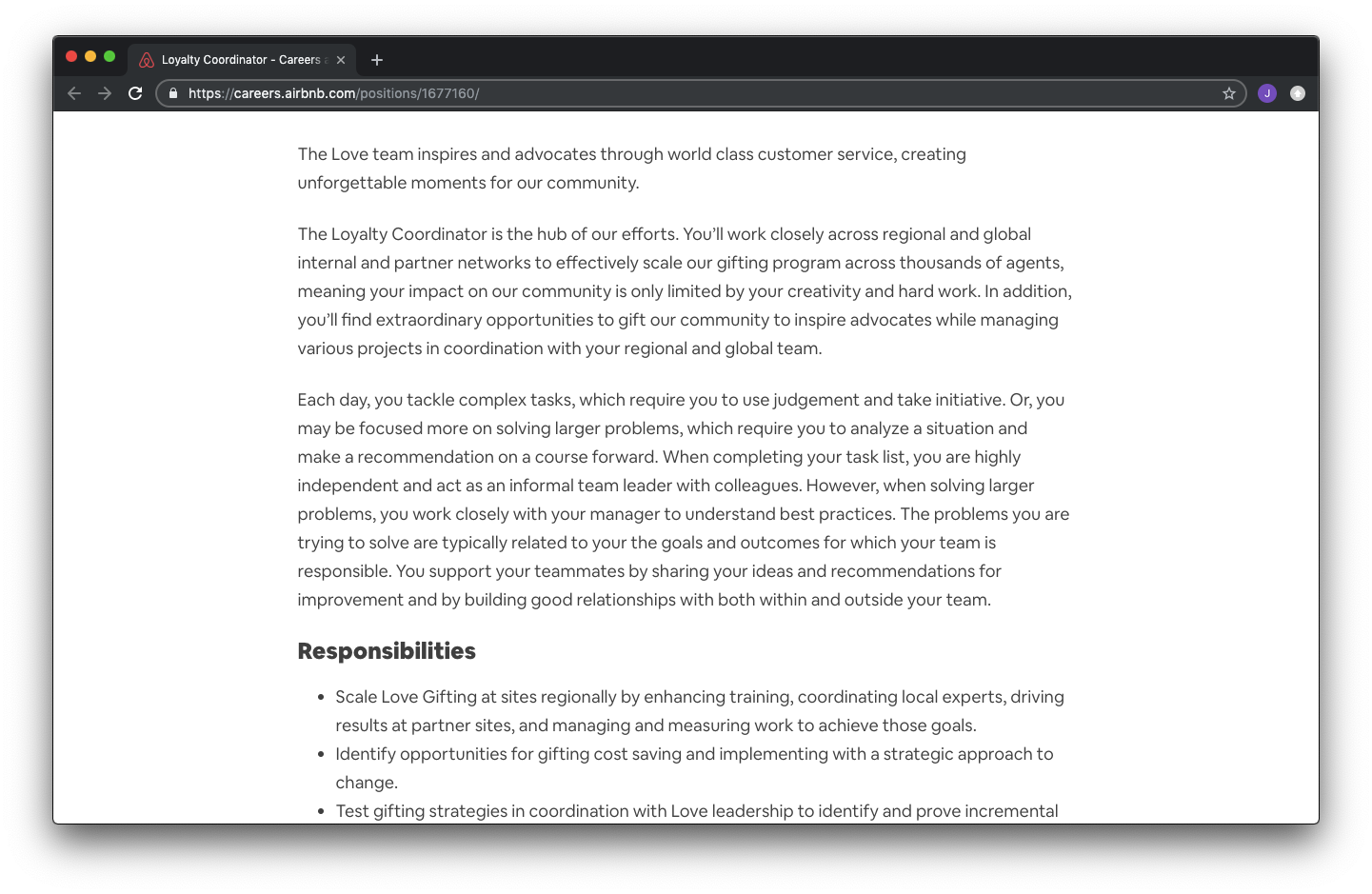 Airbnb's hiring patterns mirrors that of successful companies that are trying to set up shop in a new country, or even just grow from the ground up. It hired Operations and Engineers staff to build its product, and now that it is engrained in China, is looking to boost its userbase — both clients and hosts — and keep them loyal.

While Airbnb is seeing this growth, homegrown brands such as Xiaozhu.com ($PRIVATE:XIAOZHU.COM), which is backed by Jack Ma, is acting as the Luckin Coffee to Airbnb's Starbucks. At the time of writing, the company has 91 job openings, with 10 of them being for Interns, mostly in operations. The company's hiring pattern is split fairly evenly between Technology (i.e. engineering), Marketing, and Sales roles, which differs from Airbnb's focus more towards Community Support.

With the fast-growing Xiaoxhu.com on their radar, Airbnb appears to be harping on customer loyalty, especially in the thick of the growing trade war between China and the United States.