The ambitious, bold and hungry start their week with The Business of Business!
People
2.7.19   8:24 PM People

Air fryers were one of holiday 2018's hottest gifts as evidenced by Amazon sales-rank data.

In the 80s, my father bought an air popper as a healthy solution for our family's addiction to popcorn on Blockbuster rental movie nights. It was... okay. We eventually switched back to the real stuff.

The latest air-instead-of-oil trend is air fryers, devices that endeavor to replace the deep fryer as a cleaner, healthier way to wrangle up homemade french fries or fried chicken. A chef friend of mine wants one. I know several people who received air fryers for Christmas. In fact, according to Amazon ($AMZN) sales-rank data, it seems we all know someone who is experimenting with his or her new air fryer.

Air fryers have had a mediocre retail history since their introduction in 2005. But Christmas 2018 saw renewed interest in the devices. Until last christmas, they had failed to rank in Amazon's top-100 for its Home & Kitchen category. But the post-Thanksgiving holiday shopping season put them back on the map.

It was around then — December 17 — that The New Yorker ran a story titled "Is the Air Fryer the New Instant Pot?" On December 19, Women's Health ran "There Are Literally Four Air Fryers On Deep Discount On Amazon Today".

Between December 17 and December 25, the following publications ran stories about air fryers: The New Yorker, Women's Health, Mashable, Eater, Business Insider, The Daily Caller, Wired, Inc., Us Weekly, and The Washington Post just to name a few. Inc. reported that in the month leading up to Christmas 2018, more than 11,000 people joined a Facebook community called "Air Fryer Tips and Recipes". At the time, the group had 240,000 members. Today, it has over 300,000 members.

Of all the air fryers, the BLACK+DECKER HF110SBD PuriFry Oil Free Air Fryer, 2-Liter, Black / Stainless Steel is the favorite at Amazon with an overall average sales rank of an impressive 9.0 (meaning it was the 9th most-popular product in the category on the days that it ranked on average). 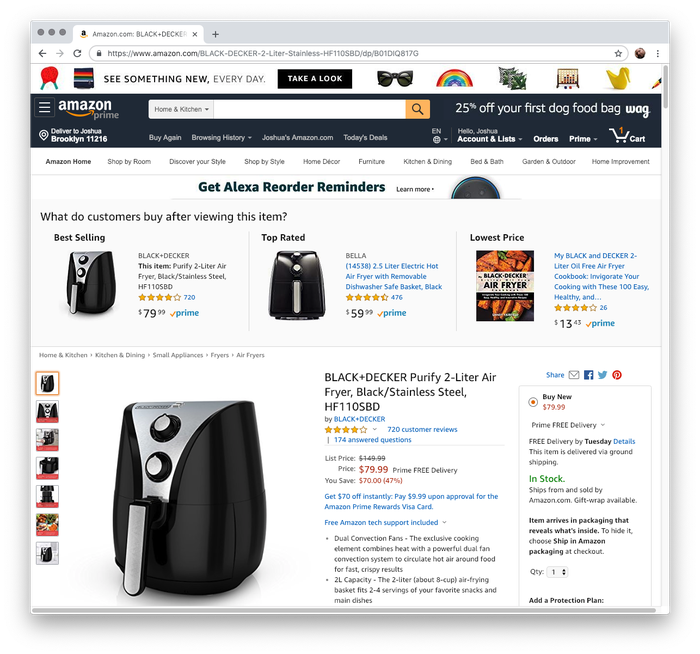 The Black + Decker air fryer retails for $149 but its heavily discounted $79 price tag is certainly helping sales. The most consistent best-selling air fryer at Amazon, however, is the GoWISE USA Programmable 8-in-1 Air Fryer, which ranked in the top-100 for 30 days. This $79 device has an excellent 4 out of 5 review rating across over 1,200 reviews.

Interest in air fryers is at its highest as the sales data suggests. Google Trends data confirms this - the site reports that interest over time spiked during the week of Christmas 2018, exactly when sales did as well. 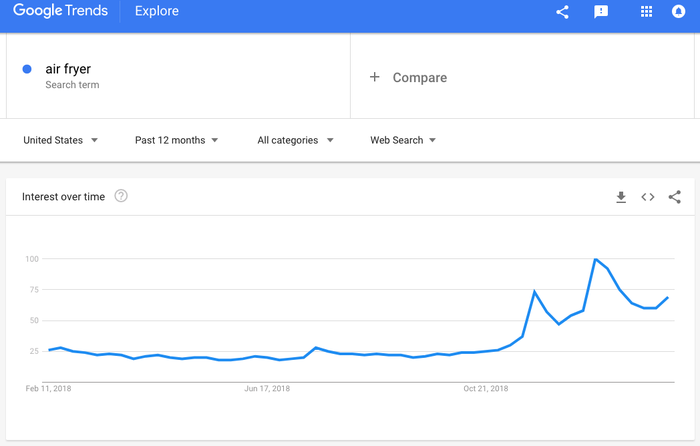